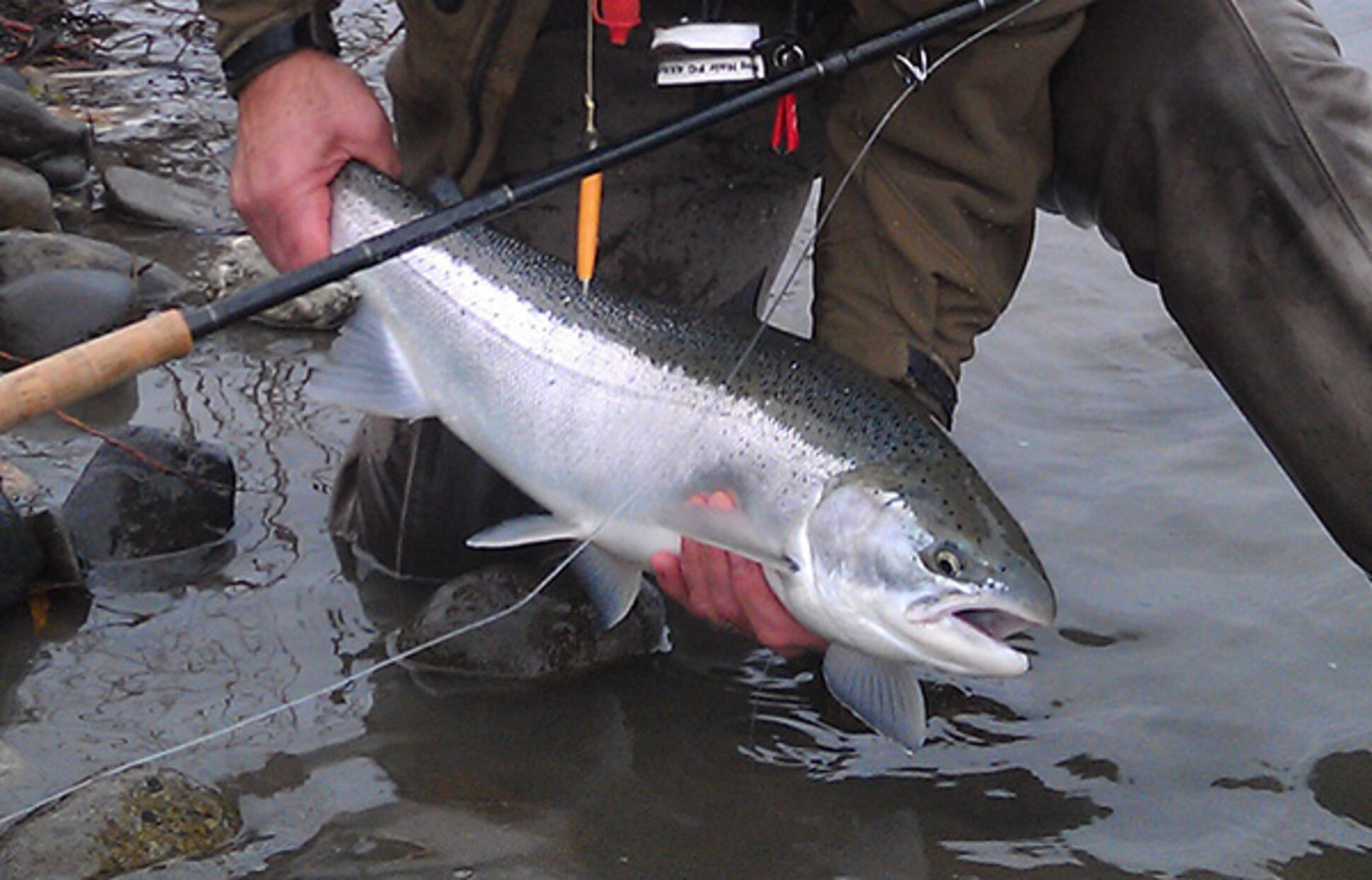 Winter Steelhead fishing often occurs during rainy months when rivers are flowing at increased levels and usually a bit off color. These conditions call for larger flies and more massive lines such as a Skagit head to deliver them to the fish. You could say that winter steelheading is primarily done with Skagit style lines however; carrying an assortment of heads to match the conditions can determine your angling success.

After many, many years of chasing chrome with a fly one of the most important things that I have learned is how fast the conditions can change. This is more common on shorter rivers where headwaters can flow through narrow canyons with steeper gradients compared to lower sections where flows are slower as rivers widen before pouring into the ocean. California’s Eel River is one such river where its changing topography requires anglers to carry an assortment of heads. 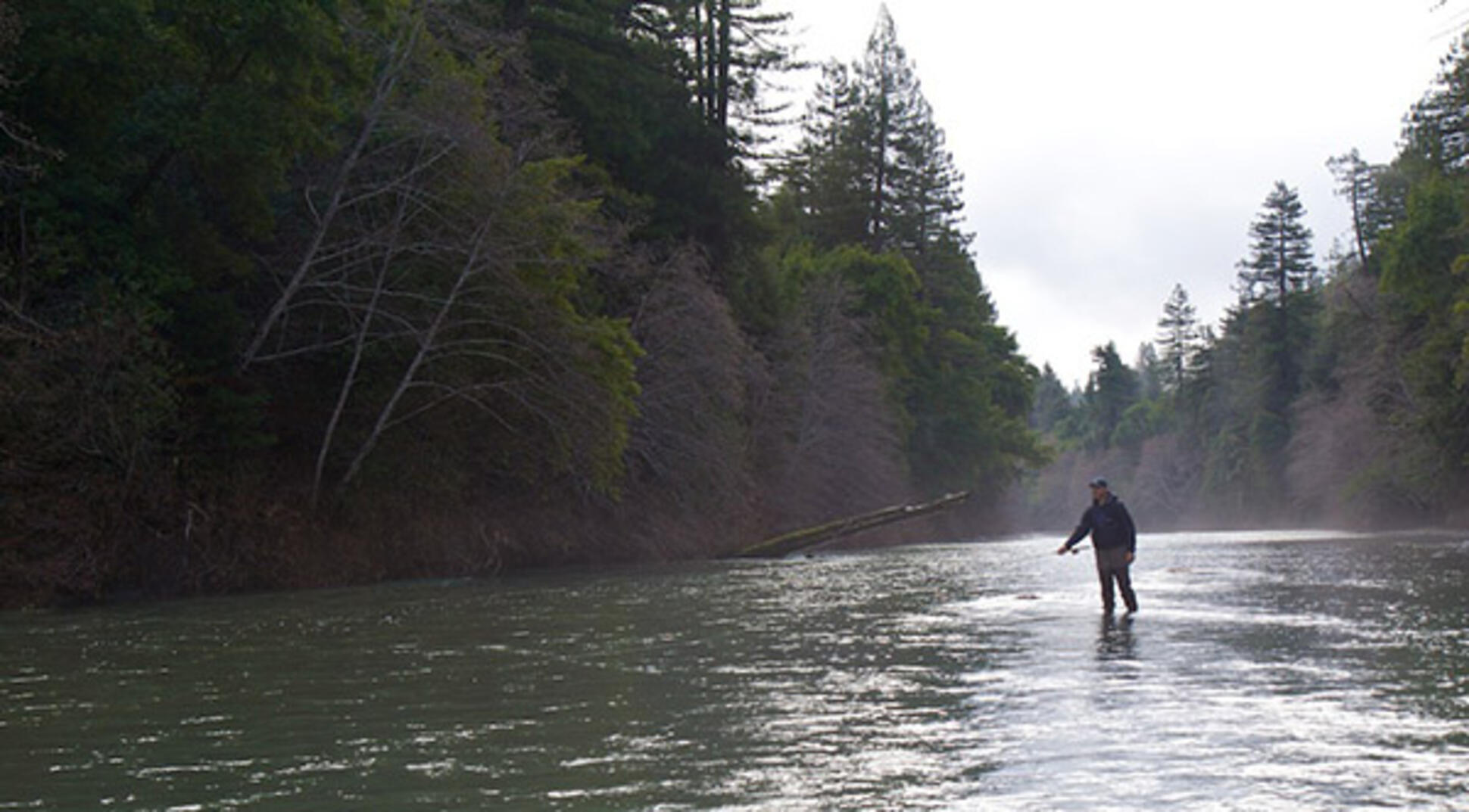 On one particular cold winter day I was almost at the end of my 5 hour drive as I hit my turning signal and made a left turn off the highway down an unmarked gravel road that parallels California’s scenic Eel River. More than eager to make my first cast of the morning, I quickly assembled my seven weight Sage One spey rod and attached a RIO Skagit Max head with an intermediate sinking MOW tip. I added 5 feet of 12lb tippet and tied on a size 2, four inch black and purple leech. The water conditions were normal with 3 to 5 feet of visibility and since the sun was still below the horizon the fishing conditions were in my favor. I waded into the top of a classic 3-6 foot deep, medium speed run and fished my way down river taking three steps after every swung presentation.

Before I knew it the sun was on the water and I was fishing into my third run of the morning without a grab. So far the only fish I saw was an adult steelhead that leapt completely out of the water for no apparent reason. After seeing this fish jump, the anticipation of a grab during every cast greatly increased keeping my focus on the job at hand. On this morning though, like many days of steelhead fishing, the fish weren’t willing to simply give themselves up. I switched to a brighter colored fly about the same size in hopes of convincing a fish to grab but to no avail. As noon approached I took a short lunch break and planned my strategy for the afternoon and evening. I decided to take a short ride further downriver to a set of runs that were within five miles of the ocean. In this section of river the current speed slows down as the river widens and flows across huge gravel bars. 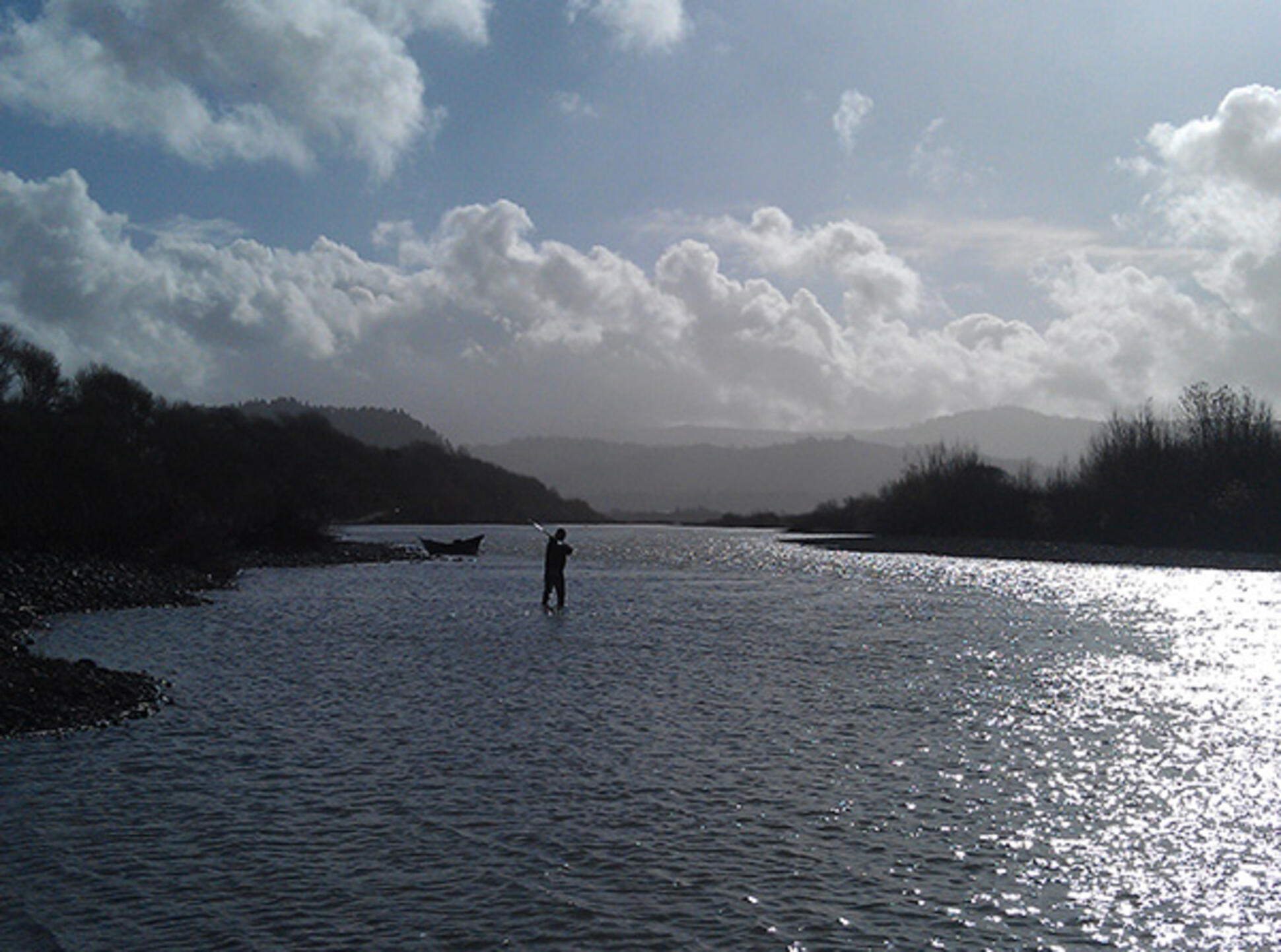 I pulled my truck up next to the river which over looked and very long, wide shallow run that extended over a quarter mile. I had a perfect vantage point from the driver seat of my heated truck while drinking hot coffee, to spot waking fish swimming through shallow water. The sun had disappeared behind the clouds and the slight breeze that was creating a surface chop on the water gave way to glassy-like conditions. After patiently watching the river for 10 minutes I spotted the two wakes sliding upriver over the shallow tailout at the bottom of the run. They were immediately followed by a second school of approximately ten v-waking fish that were being followed by an even larger group of at least thirty adult winter steelhead.

My excitement level soared as I anxiously waited for these fish to swim within casting distance. As the first few v- wakes slowly swam up river towards me they decided to swim along the opposite bank over hundred and fifty feet away. Exercising patients I continued to wait for a closer target to swim within range. I stripped off another fifteen feet of running line from my reel as I knew I had to make a long cast. With the rod tip low to the water I swept the rod back to form a D-loop and flung my Skagit Head, intermediate MOW tip and a size #4 pink marabou leech over 80 feet towards the middle of the river. The closest V-wakes were still over 30 feet downstream slowly continuing to swim upriver. With the rod tip positioned close to the water my fly began its slow swing across the run to a position directly below me. Without letting the fly sit I aggressively stripped the line in and fired out another cast that landed about fifteen feet above the school of slowly moving v-wakes. As soon as the fly landed on the water, fish that were creating the v-wakes immediately stopped moving and briefly held their position. As the fly swung towards them, the school of fish separated as my fly passed through them. After the fly swung below the school of fish they all merged back together and continued their slow-paced swim upriver. More waking fish continued to swim into the run just below me and I continued with two more casts and experienced the same behavior from this school of fish. Without increasing my frustration level any further I quickly began digging through my sling pack for a Scandi Head that would land on the water with a softer presentation. I attached a 15 foot- 12 pound test tapered mono leader and quickly executed a single spey cast that launched the fly toward the middle of the river just above the next school of moving fish. After the line hit the water I dropped the rod tip and the fly began to swing. The tension was tight to my line as it swung to a 45 degree angle below me. Suddenly, I felt a slight tick immediately followed by another then the line went tight. I pinched the running line between my finger and cork grip to feel the hard pulling sensation of a violent, head-shaking winter steelhead. About 2 to 3 feet of running line slid between my fingers as more headshaking erupted in the calm waters surface. Now that the fish realized it was hooked it swam toward the bank directly below me and then quickly turned downriver while pulling line off my reel at the speed of an Olympic sprinter. By now it looked as if this fish had the upper hand and was freely swimming back to the ocean. I dropped the rod tip off to the side, low to the water surface to tire out the fish’s lateral muscle. The fish immediately stopped quickly changed directions and began swimming toward the opposite bank. After another 10 minute fight the fish finally gave up and turned on its side as I lifted the rod tip before gently grabbing its tail. After a brief session of admiration and photos I faced the fish upstream in the current and watched as it slowly swam away to continue its journey up river. I was able to hook and land another steelhead in this run before I noticed that all the v-wakes had disappeared upstream. 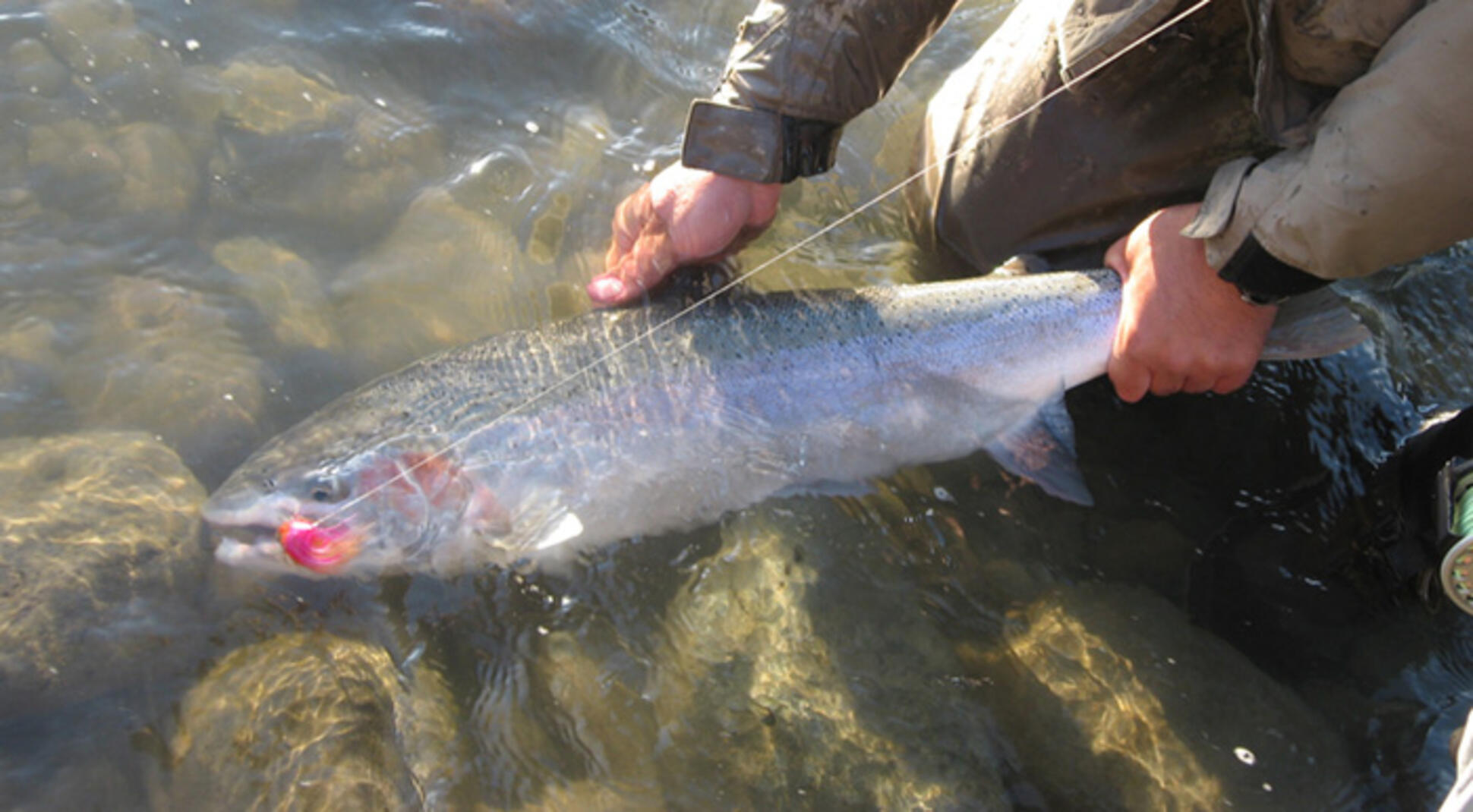 After contemplating my successful fishing experience the lesson I took from the day was to always bring my RIO Scandi Heads even when fishing during the winter months. Often, we cast and fish certain lines based on their ease of use however, the conditions will always have the final say.
×