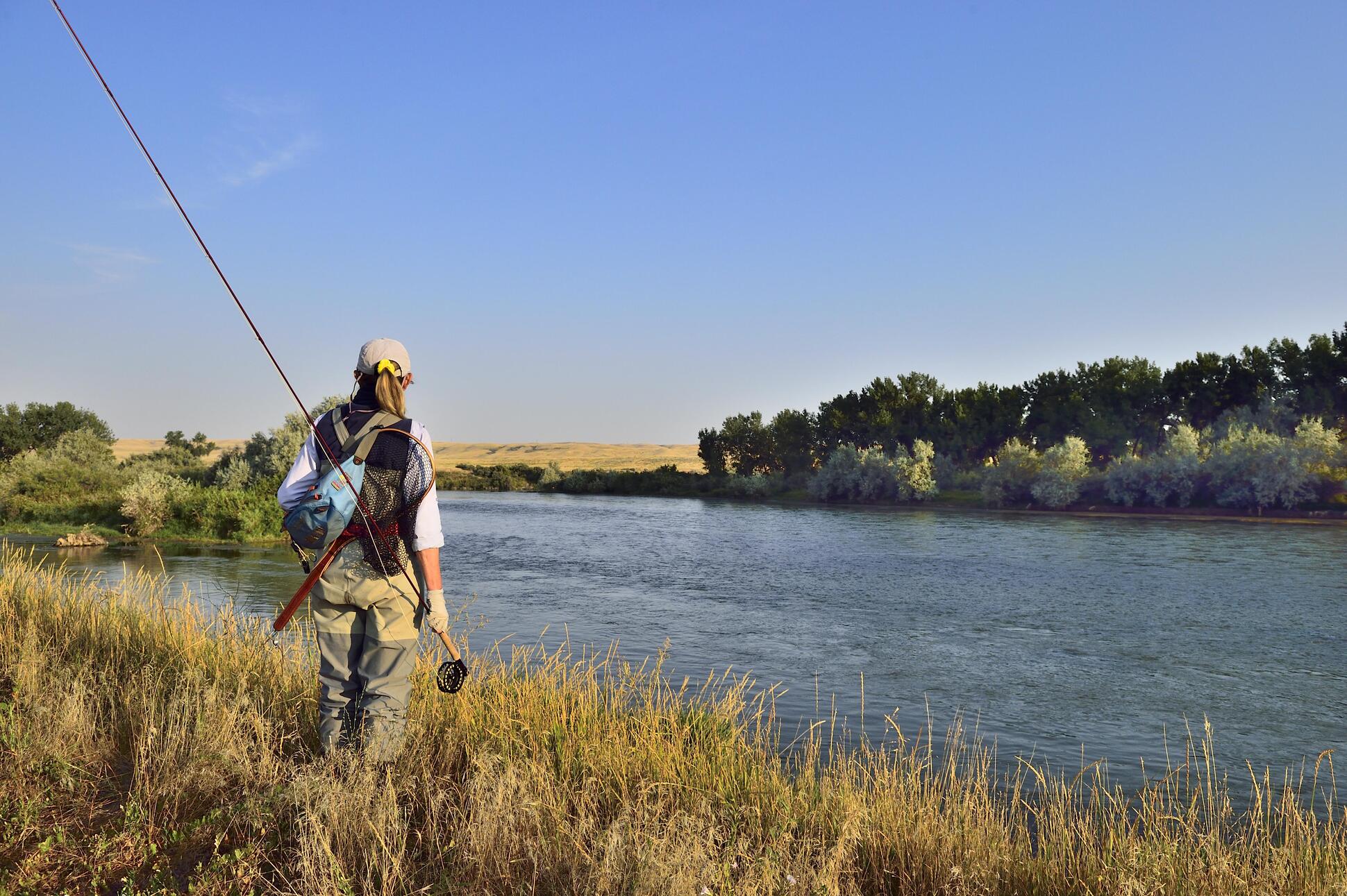 We were in the middle of the Masai Mara in east Africa hosting a photo safari when we received an email from our friend, Chuck Furimsky. In it he said he was on Montana’s Bighorn River and that fishing was really slow. In fact, the high water flows had left little dry fly fishing and the previous day he landed only three fish. We had heard previously that the river was running at fifty thousand cfs and that although the streamer fishing was productive, the dry fly and nymph fishing was tough. That was especially bad news for we had only three days at home and then it was off to the Bighorn for two weeks. They say hope springs eternal, so we'll cross our fingers and hope for the best. 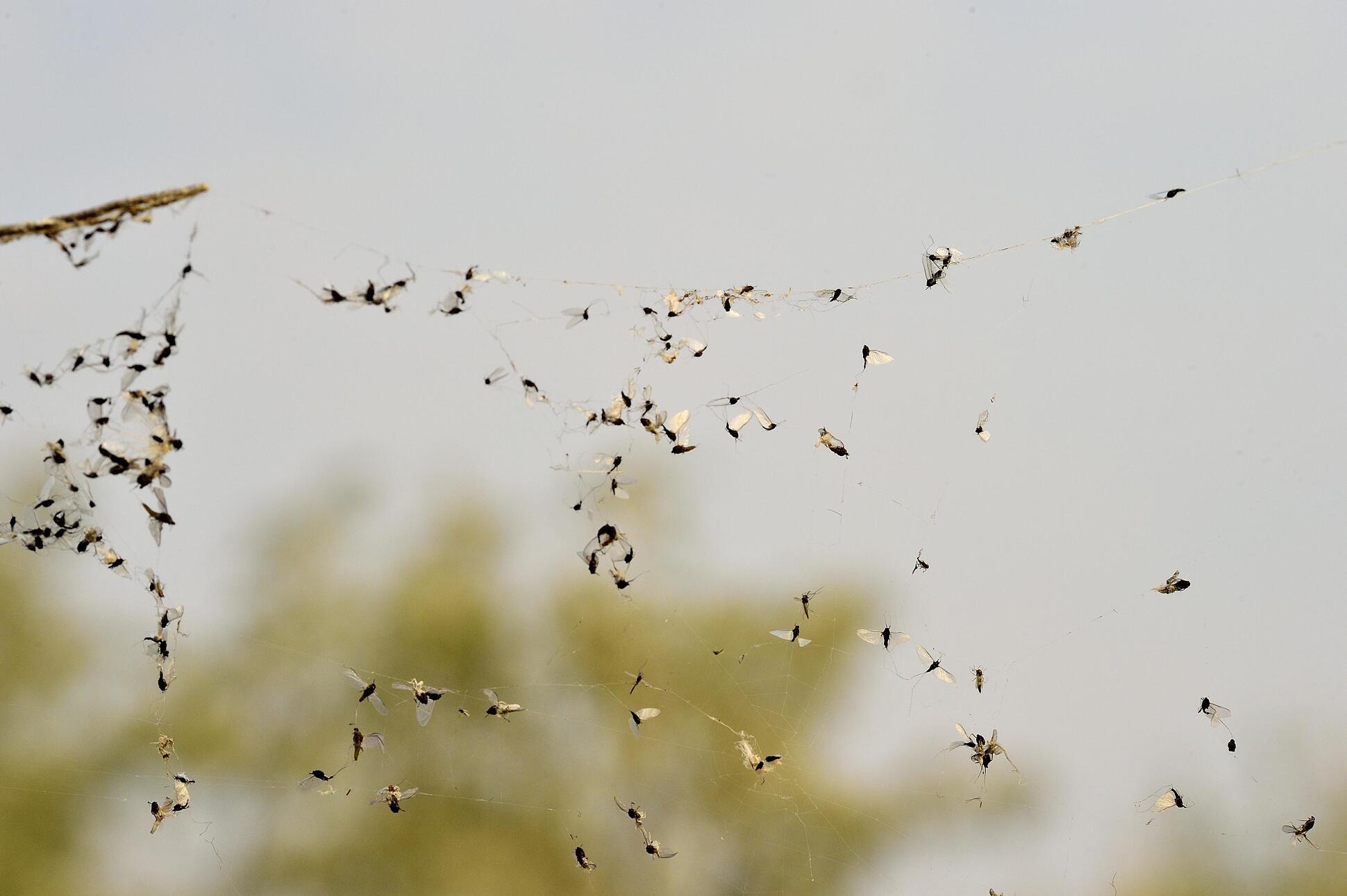 A week later, smoke from forest fires hung heavy over the city of Billings as we picked up our rental car and headed for Fort Smith. On the way I phoned our friend Mike Craig who lives on the Horn and he said we just won the lottery. What? By that Mike meant the flows were now around three thousand cfs, the river was down and very wade-able, and the tricos were on. For us that news was like winning the lottery. We have a full lodge at the Kingfisher Lodge with guests hoping to have a good week of dry fly fishing. We made a stop in Fort Smith to buy our fishing licenses and Gail at the fly shop confirmed that it had been slow fishing for a good part of the season, but with the lower flows and the tricos we should have a good week. 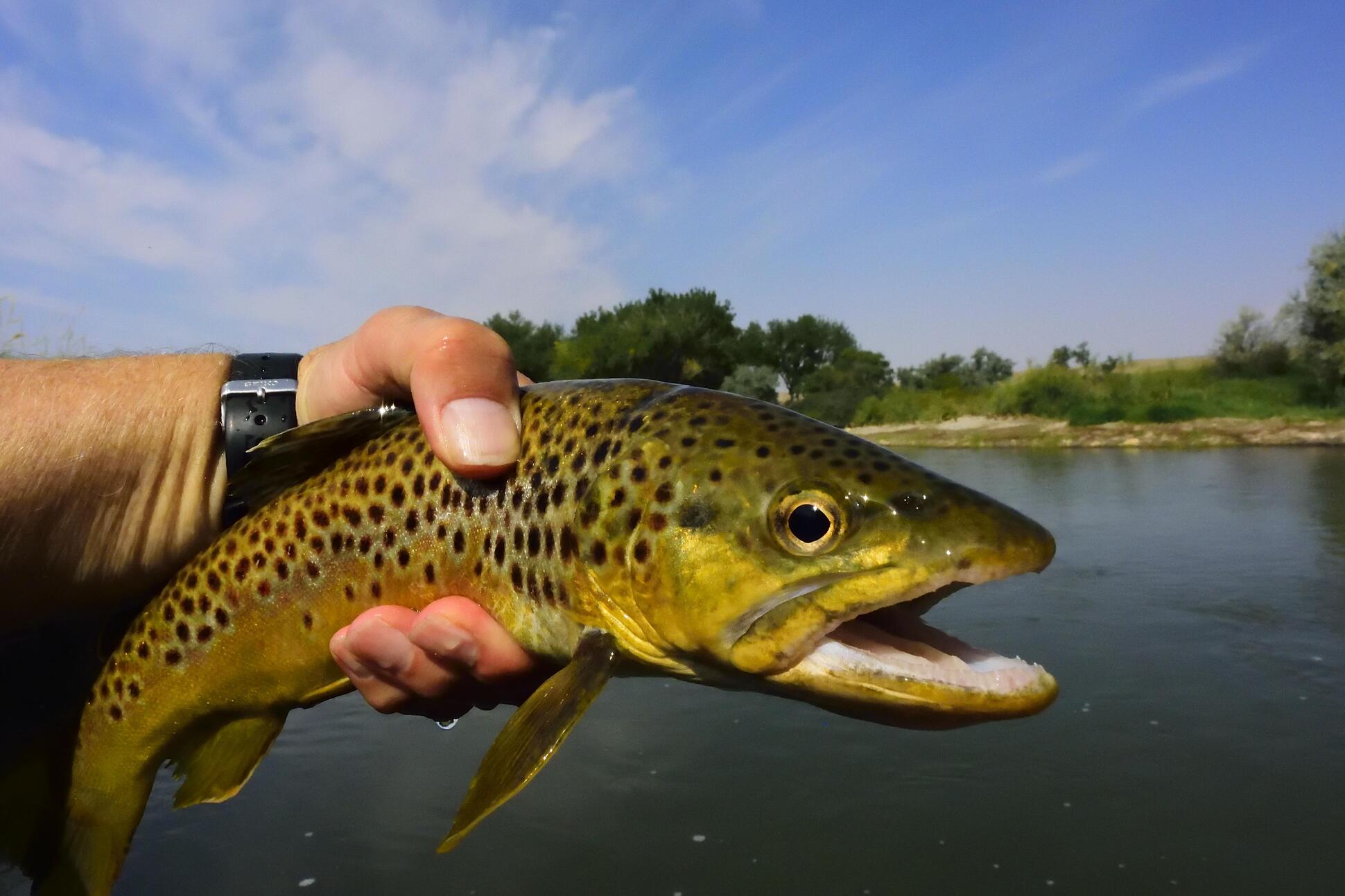 The first morning was busy with introducing anglers to guides and making sure that they had everything they might need for the day. An hour later we drove back to a favorite flat behind the lodge. Along the shoreline we saw trico spinners in the air and a short time later the rise forms began to appear. We separated and Cathy walked upriver to cover a pod of rising fish while I moved out into the current to watch the foam line for heads. Sure enough, the fish were there but in the glare it was hard to see. I started with a size twenty trico spinner tied on RIO 4X hoping that I could get away with the heavier tippet in the weedy river. Twenty drifts later the feeding trout showed little interest in my spinner, meanwhile I saw Cathy landing a fish. I changed my trico spinner from a poly wing to a clipped hackle wing but I continued to get refusals. 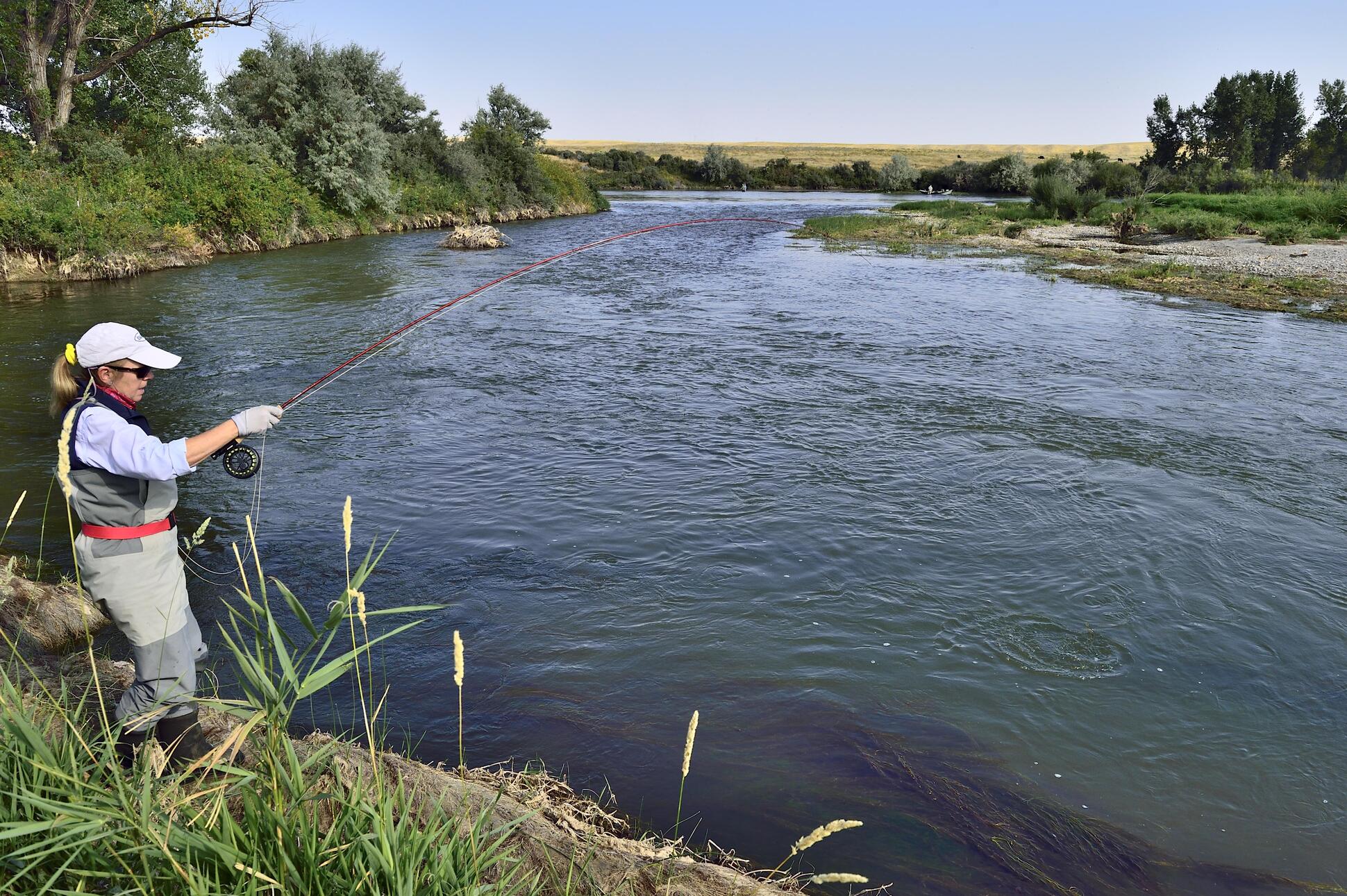 Upstream Cathy was waving so I exited the river and walked up and as she hooked another fish. I arrived in time to net the fourteen inch brown and I saw the trico poly wing spinner in its mouth. Funny, I commented that I had been using the same pattern with plenty of rising fish but no interest. She asked what size tippet I was using and I told her. “Tried that” she says, “with no luck, but I changed to RIO 5X flouro it made all the difference.” So I returned to my original spot and rigged up with 5X flouro. Second cast and my trico disappeared. Two browns later and I was convinced the 5X made a difference.

We a sure thing becomes technical.

This routine at the lodge continued for the rest of the week. Everyone left happy thanks to the tricos. The second week started out mirroring the first week –trico mornings and extremely warm afternoons with little success on nymphs. Mid-week a few of the guests went on the lower river from Mallard to Two Leggins and caught some nice fish on streamers and although they saw tricos, they did not see many fish feeding. All good things must come to and end and on the last morning of our trip Cathy and I took one last look at the river. When we walked to the water we were amazed to see Mahogany spinners blanketing the water. There were heads were up everywhere. We grabbed our rods and had the best dry fly fishing of the trip 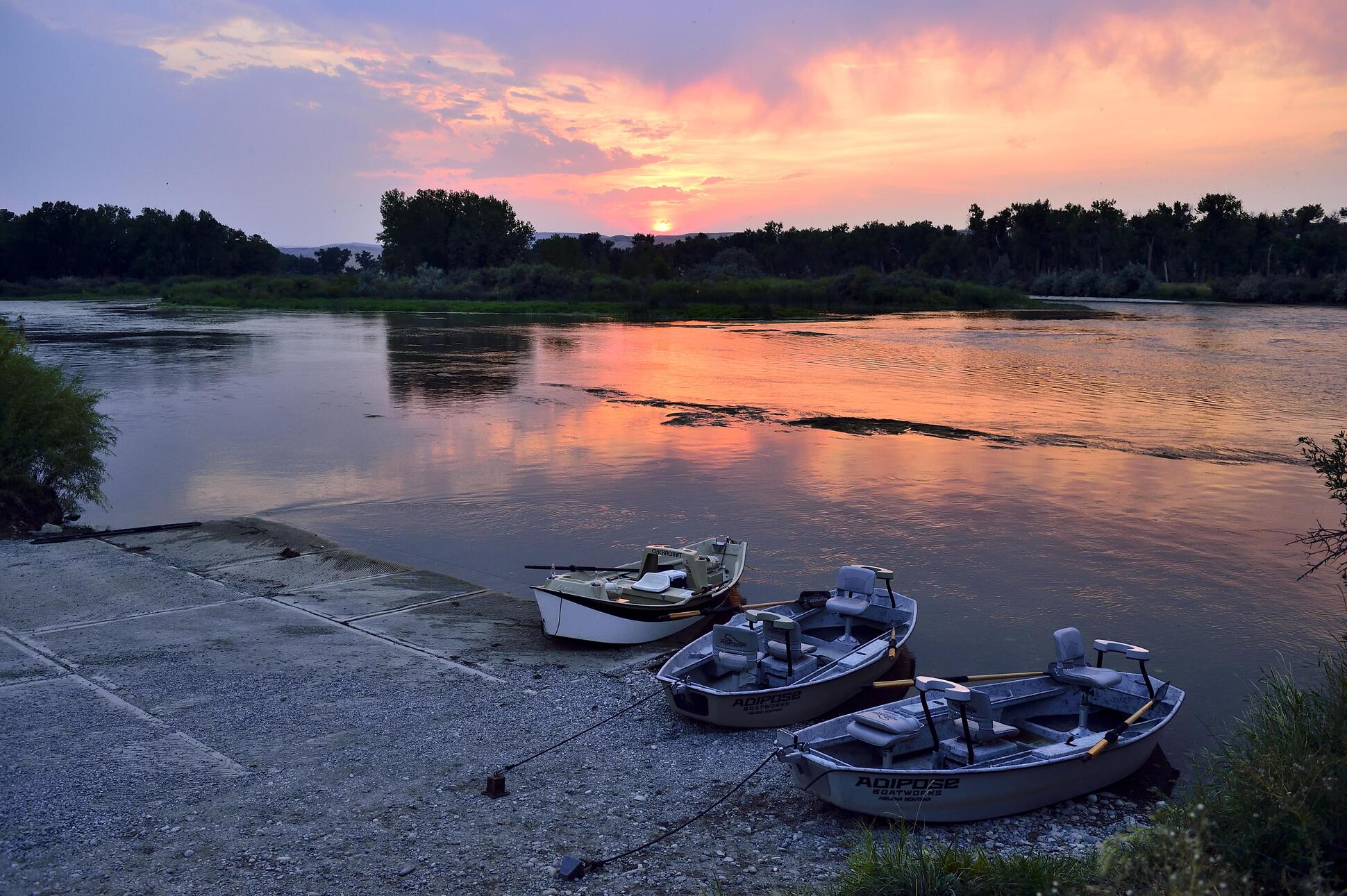 Two browns later and I was convinced the 5X made a difference.

Looking back we realize it's been an unusual year for the Bighorn with extremely high water levels for a good part of the season and then slow dry fly fishing with sporadic hatches. That said, the Bighorn remains our favorite river in the west. We lucked out with the tricos and had a great morning with the mahogany spinners, and yes we will be back next year.