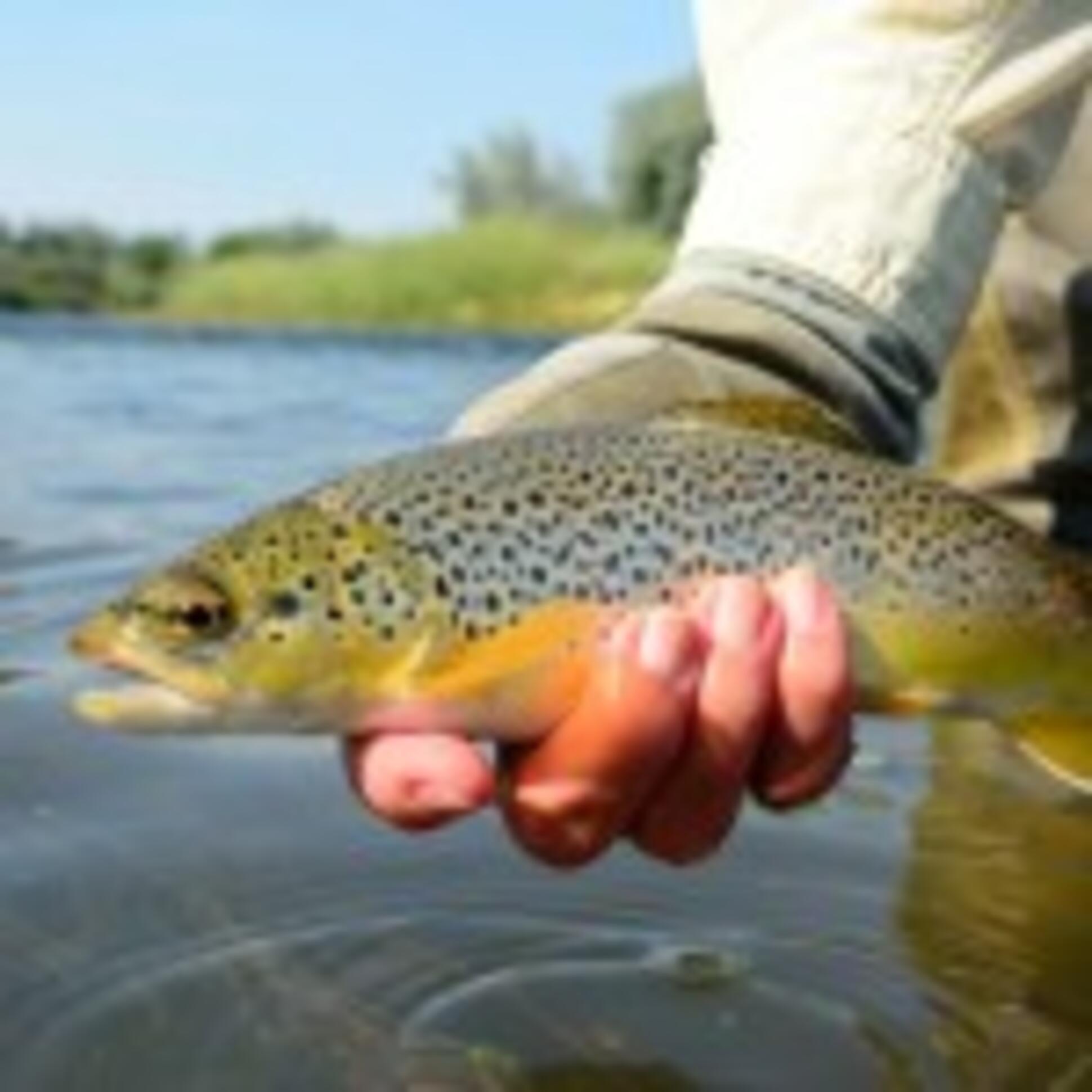 We are on the Bighorn River in Montana this week with a group of anglers. They have had lots of dry fly fishing so everyone is happy as they share photos of nice fish and stories of PMDs, Olives, and Mahogany duns and spinners.

On the coffee table in the lodge is Seasons Of the Bighorn (Willow Creek Press,1997). At that time it was written it was about 15 years after the river opened to the public and the newness had not yet worn off, when Polly’s was the one and only place to eat in town, and cars and trucks were lined up at the boat ramps waiting to “drop in” or “pull out”. Rooms were hard to come by and the parking lots at the access points were over-flowing and all the fly shops in town were busy.

Today the pace has slowed a little, Polly’s is still a restaurant but not the gathering spot it was once, the shops are a little less crazy but still busy, the parking lots have some extra room on most days. It seems that everything here has gone through a metamorphosis except the river. Sure, it has ups and downs like any river, but overall, it’s still the same river it was back then. If you talk the “old-timers” today, they will tell you that the fishing is much the same too. We recently spoke with Mike Craig, a friend who arrived early on the scene and opened the first fly shop in Ft. Smith, and just yesterday he said the fish are as nice now as they were back in the early 80’s. The big difference he sees is that back then if you could get the tippet through the eye of the fly, you could catch the fish. He says the fish that now require RIO 5x would have been caught on 2x “back then”.
As I read through George Kelly’s introduction in the book, I couldn’t help but wonder why he never wrote more because he has a special gift for writing and as I turned the pages he pulled me into the history of the Bighorn – and I’m not a history buff. I started telling trivia to our guests and they thought it was corny, but interesting. Did you know the Crow were not the first Native Americans in this valley? It’s likely they were progenitors of the Shoshone tribe. The Crows didn’t arrive until late in the 18th century. And how about this, there is a buffalo jump found on the Hoodoo Creek-Dryhead Creek divide with deposits of buffalo remains sixty feet deep! But while that’s interesting, I was anxious to see what he has to say about the fishing.

The short version of the fish history on the Bighorn is that the browns were never stocked. They are from the original brown trout in the water before the dam was built. The first stocking was of cutthroats and rainbows. The cutthroats didn’t do well and neither did the first rainbows. These were of the Arlee strain from the state hatchery in Arlee, Montana. It wasn’t that they didn’t grow big, they surely did, but they were fall spawners and spawning in the fall doesn’t seem to work well for the rainbows here. The second strain introduced seems to be the offspring of fish from Lake de Smet in Wyoming, Willow Creek Reservoir, and the Madison. These are spring spawners and the river now enjoys a successful stain of these rainbows.

From one end of the Bighorn Canyon to the other, the river is constantly being enriched by the very limestone rock through which it flows. As water dissolves, limestone and various carbonates are formed increasing the alkalinity of the water. This high alkalinity, in the neighborhood of pH 7.4-7.8 helps set the stage for boundless numbers of freshwater invertebrates. This abundance provides the stage for today’s fishing industry here with the river boasting over 5,000 catchable fish per mile of river.

It is here that you’ll find the Yellowtail Dam, 1.5 million cubic yards of concrete standing 525 feet high and 1,480 feet across. Behind the dam, it has a capacity of 1.37 million acre feet and a conservation capacity of 613,672 acre feet. At an elevation of 3,657 feet, the reservoir has a surface area of 17,300 acres. While this is impressive, what fly fishermen are most concerned with is the water after it passes through the reservoir and the afterbay. Basically from Ft. Smith downstream to St. Xavier, just south of Hardin, MT, approximately 20 miles, give or take.

Jim Bridger was the first trapper to float the Bighorn with a load of furs destined to be made into hats for the gentry of Eastern cities. Today fishing guides, many of whom are spiritual throwbacks to Jim Bridger and his companions in the fur trade, float their drift boats down the river intent on arranging their clients’ own rendezvous with the trout. And like Jim Bridger, they must know their trade. To be a guide on the Bighorn effectively one must be an angling generalist well versed in spring creek tactics as well as able to cope with the mysteries of a large and often opaque river. It won’t do, for example, to just chuck a wooly bugger at the river bank and hope for the best. One must look deeper and more perceptively into what it is that makes a river tick in order to learn its secrets, and most of the guides, in addition to sharing the attributes of good guides everywhere, are experts in the unique and subtle nuances of the Bighorn.

The Bighorn, on the other hand, is everyman’s river. It is easy to get to, and when you get here accommodations range from inexpensive to do-it-yourself-free to lodge-style comfort, handpicked guides, and gourmet meals. The point is that you have a choice and the trout, egalitarian creatures that they are, don’t care what choice you make.

Well, George Kelly is just getting warmed up at this point in the book and I wish I had the time and space to go further, but it’s late and tomorrow is another day. What will the river give up tomorrow, PMDs, Olives, Pseudos, Mahoganys? Maybe the grasshoppers will start. Whatever it is, our guides and the clients will be ready for them. There are lots of great rivers and a few really great ones. I’m glad we’re on one of the really great ones this week. 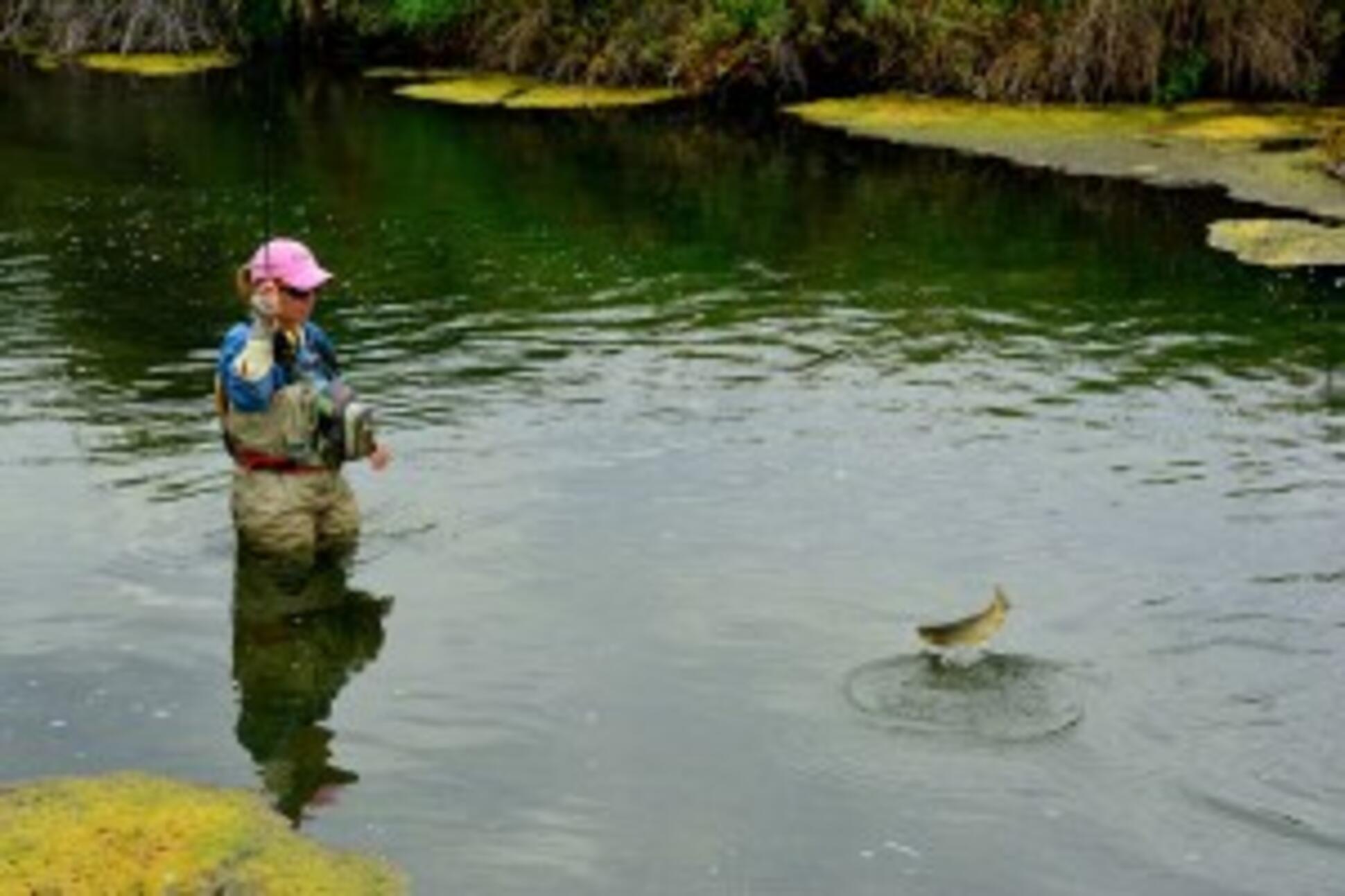 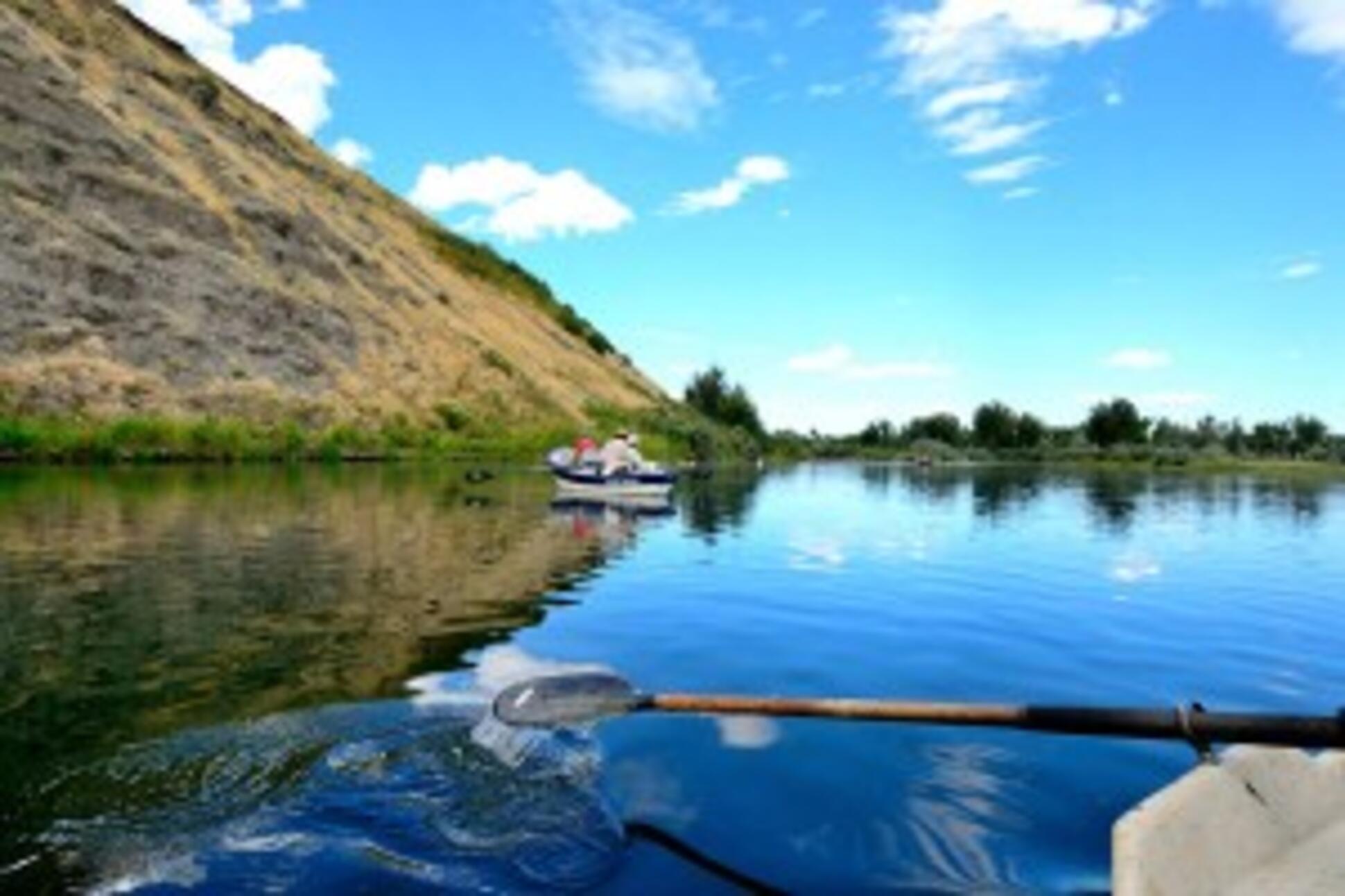 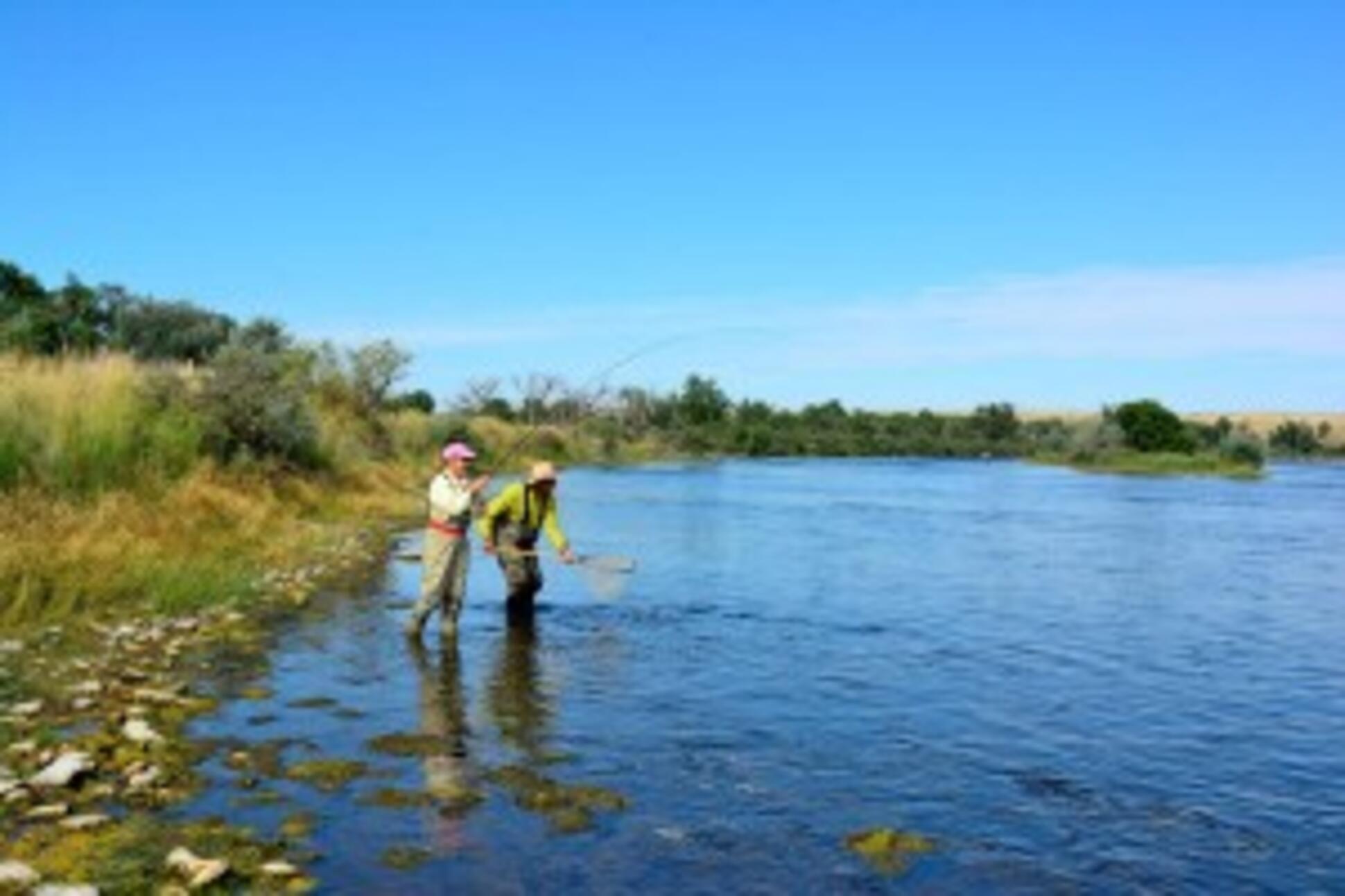