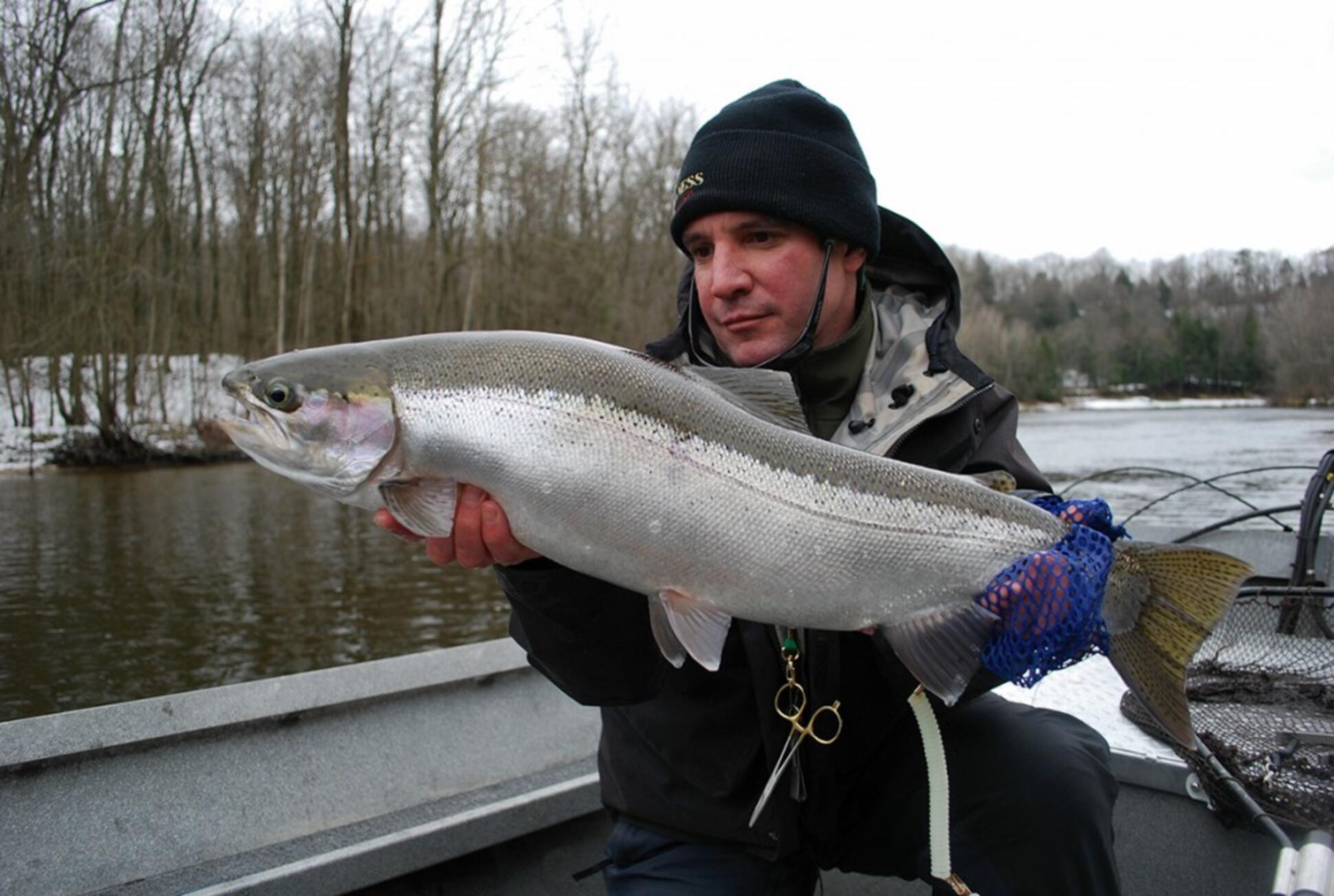 Michigan is blessed with a maze of crystal streams and rivers that etch their way across the state and into the Great Lakes. We have a prolific run of dime bright, feisty steelhead that eagerly snap at our swung flies, especially in the fall. On Michigan’s west coast, the two most famous Michigan big rivers are the Manistee, and my home water, the Mighty Muskegon. These two are “boat rivers.”

Michigan guides and anglers run flat-bottomed jet sleds and drift boats. We anchor up on runs and pools, dropping the boat slowly down between casts to best cover the likely holding lies. Spey casting has taken off like a wildfire here in Michigan, but spey casting from a boat presents students and clients with some challenges. 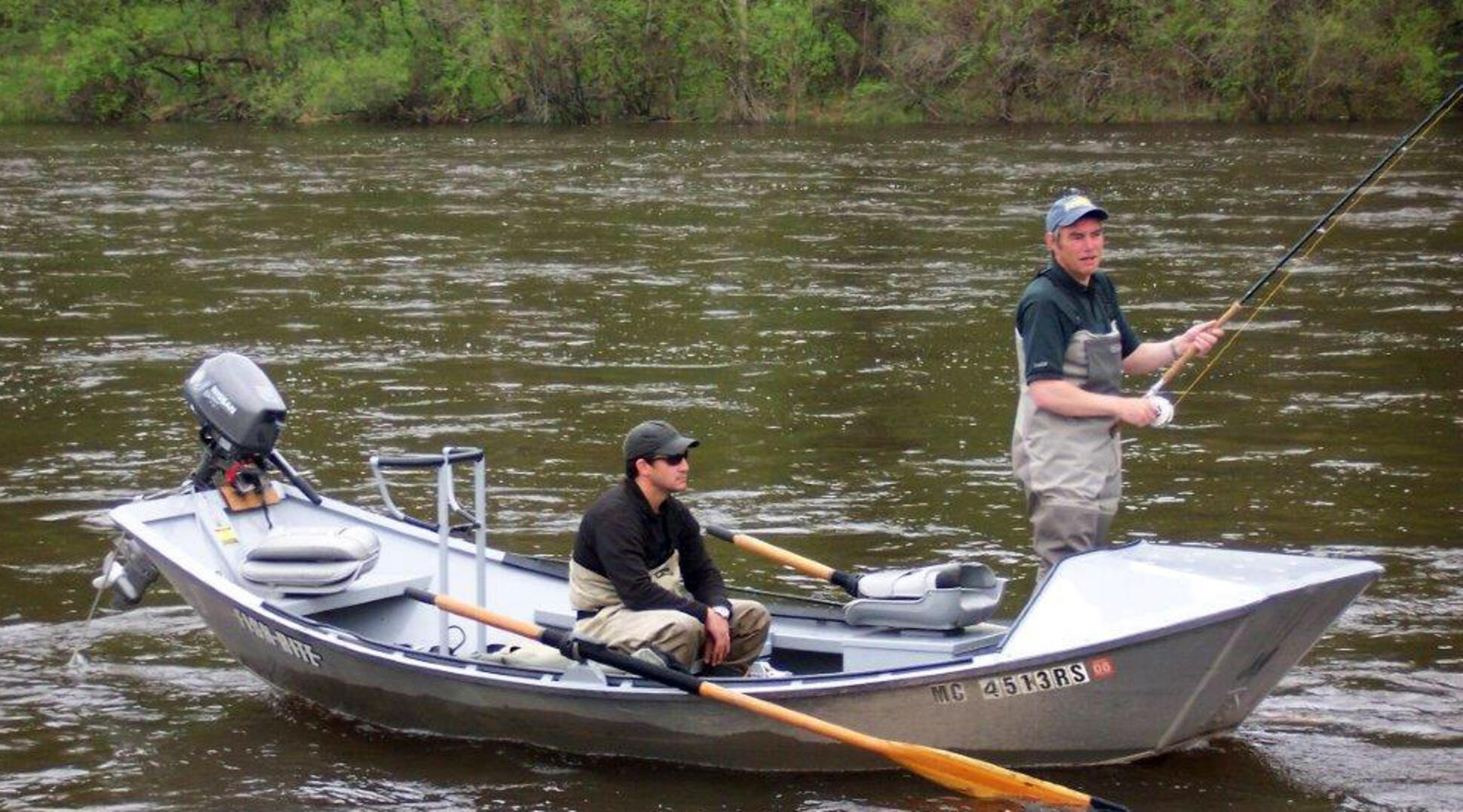 Pros and Cons of Spey Casting From the Boat

One advantage to casting from a boat is the height gained from standing on the casting deck. This can be forgiving for a poorly formed D-loop and provides tremendous lift to pick up fast-sinking lines and heavy flies. The down side is anchor rip. Due to the elevated casting position, the number-one cast killer is not leaving enough line stuck on the water prior to the forward stroke, resulting in the “whip crack” and a cast landing in a heap, 20 feet away.

Anchor rip is the fly leaving the water prior to the STOP on the forward cast. When this happens the fly rod will straighten and loose its load, resulting in a weak cast. The anchor should comprise the fly, the leader, and usually a portion of the front taper or sink tip, stuck to the surface of the water. The anchor has two main tasks. First, it allows us the luxury of not making a traditional back cast getting caught in the bushes behind us. Job number two is to secure the bottom leg of the D- loop to the water’s surface. Without a well-stuck anchor we have no tension and cannot bend the fly rod during the forward stroke. The anchor can pull free during the sweep back to the firing position, and during the forward stroke.

To overcome this we use a very compact casting stroke from a boat, closely watching the anchor. Asking the student to look at the anchor is a great teaching tool. It’s helpful to quickly gauge the tempo and stroke length, thus ensuring that sufficient anchor is left stuck on the water to avoid the dreaded rip. 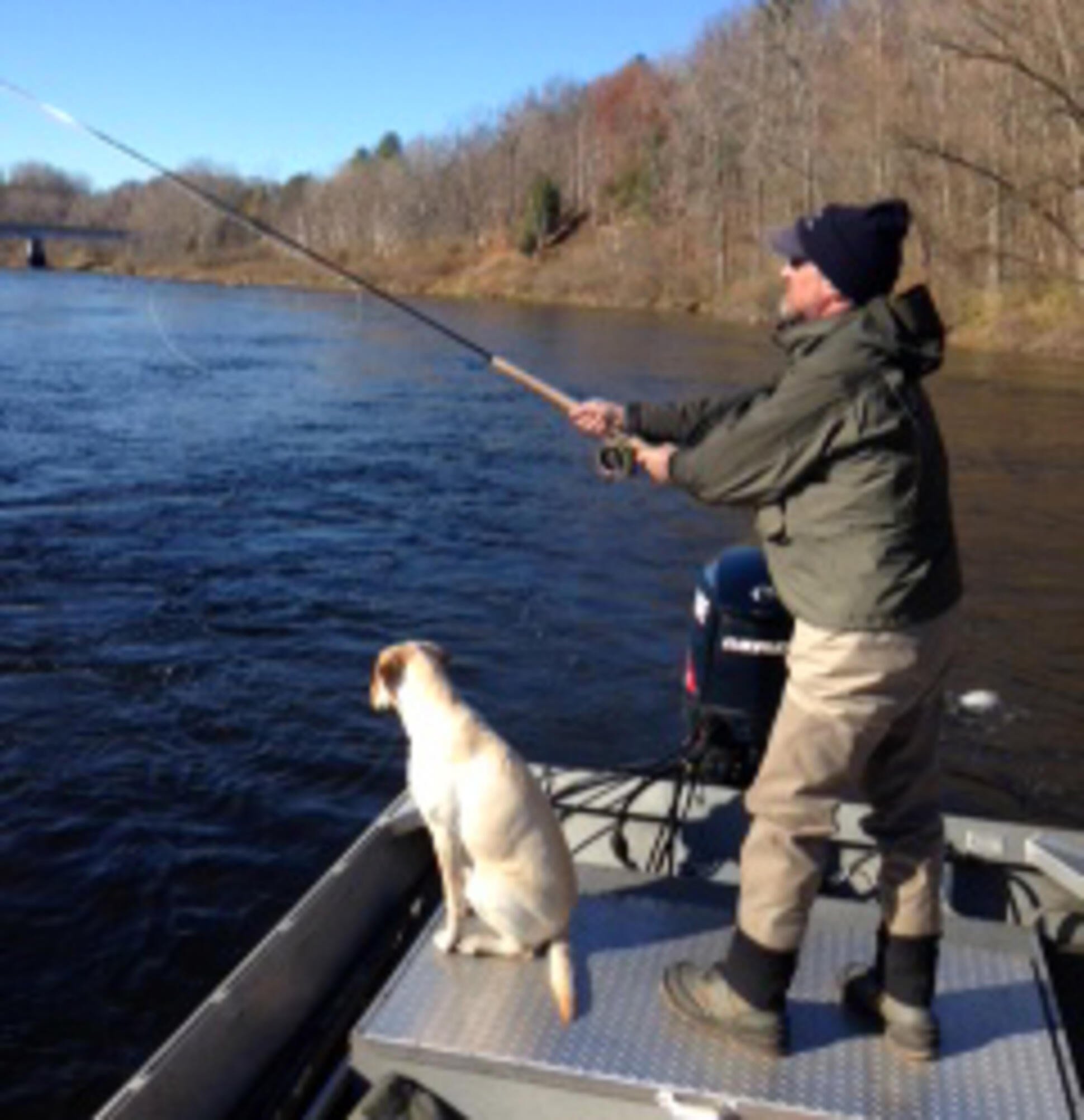 Great Lakes Steelhead are perhaps not as aggressive as their west coast cousins so we typically fish with full sinking lines and a weighted fly to help keep the streamer down during the swing. My choice is an 8 weight rod in 12.5 foot for the smaller drift boats and up to a 14 foot 8 weight for the roomier jet sleds. Modern short heads in Scandi or Skagit style such as the RIO Scandi Versi Tip system and RIO Skagit MAX are great choices. They both have the option of intermediate sinking bodies, adding a sink tip of choice to get the fly to the desirable depth. Longer traditional spey lines are just too long

Dealing With the Wind

Fishing single from a boat is easy; simply cast from the end of the boat where t he wind blows the D-loop and fly away from you. But, what happens when you have two anglers? The reality is, someone gets stuck on the “wrong end” of the boat. This can be challenging for client and guide and it’s also dangerous. There needs to be a distinction between a dangerous wind and a manageable wind. If it’s really blowing the guide should move, attempting to find a run that is sheltered or has wind coming from a helpful direction. Assuming we have a manageable wind, I will make sure the more accomplished angler gets the trickier wind into his casting side. I will instruct him to take his time and abort any cast he is not comfortable with. As with all fly fishing, always wear sunglasses with a hat and add the hood of your rain coat for extra protection.

From the high position on the boat deck you can get away with an exaggerated sidearm rod position without crashing the D-loop. Placing the anchor further away from you than on a normal cast will help keep the fly at a safe distance. It may not be pretty, but we’re not looking for style points on windy days, and success is simply getting the fly back in front of a steelhead. If in any doubt, I will ask the anglers to take turns fishing from the correct end of the boat, or if possible, drop one off in a wade-able run, then fish one angler in the boat only. Safety always comes first, no excuses.

Another hassle on windy days is managing excess running line. It tends to get caught on oar locks, switches and tiller handles and blown underfoot. I bought a pair of bottom weighted collapsible leaf baskets. They work great and prevent much frustration, leading to consistent casting, better fishing and more fun. I stole the idea from my pal Bruce Chard, a saltwater guide from the Florida Keys, where it’s always blowing 30 mph. 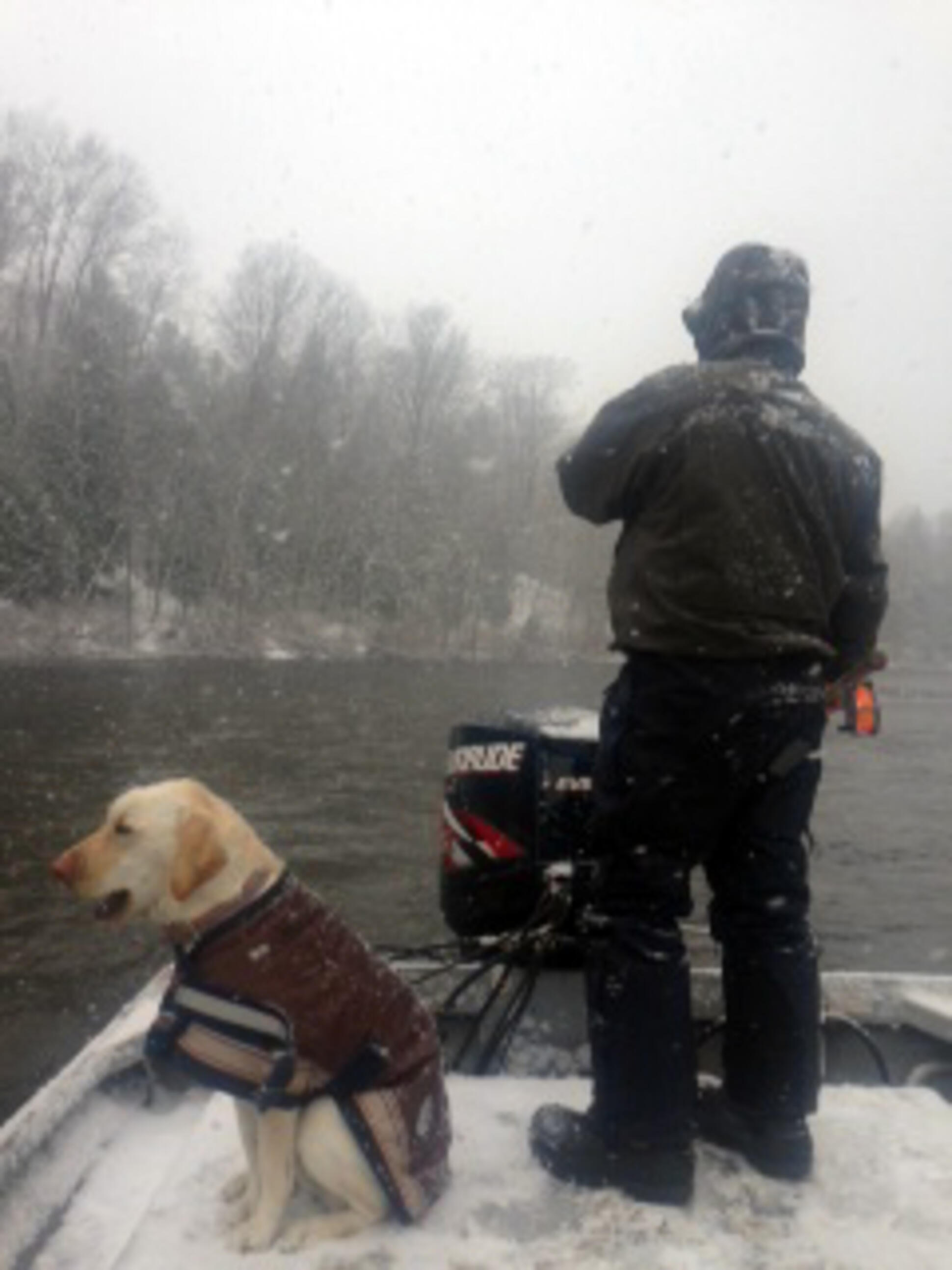 The Snake Roll and Double Spey work great when you are fishing alone but they have shortfalls when two anglers are casting. The anchor set-up with the Double Spey results in the rod tip being thrust upstream into the front angler’s face at the front of the boat – no fun. The Snake Roll is ok, but with the slightest puff of upstream wind, it’s a recipe for getting hooked in the face. Both the Double and Snake rolls have anchor points that land in front of the caster. This can be a nuisance for the guy fishing from the front of the boat because the back angler fly will often catch the flyline of the front angler as it fishes around onto the dangle. This can be avoided with good communication from both anglers and synchronized casting. But more often than not it ends up poorly organized with a mulligan cast or two, an unexpected extra Roll Cast to lift the sunken line and pretty soon the rhythm has been lost.

The very best back-of-the-boat cast is a “Reverse Snap-T or Reverse Circle-C.” The setup move is identical to the standard snap or circle cast, but the re-position move is performed below you and perpendicular to the river flow. From the hang-down on the back of the anchored boat, the angler lifts straight up and draws the rod tip away from the target and commits to the snap or circle move below the back of the boat and across the flow of the river. The rod tip should finish downstream and out into the flow past the boat, toward and pointing at the target. The fly should land just behind and downstream of the boat. Draw back with the sweep, generate a ‘white mouse’ loading the rod, carefully watching the anchor point so as not to rip it off, then circle-up to the firing position and make the forward stroke. This cast will never catch your boat buddies’ fly line. It can be performed with a manageable upstream wind and it is really the only cast to use when fishing two anglers from a boat.

Some of my clients insist on always Spey casting from the boat. I guess they want to learn the art, and feel it’s the proper thing to do. I like to use the RIO Scandi Versi Tip system form the boat. With the intermediate body and choices of sinking tips it offers the most versatile system to cover all conditions. I find myself using an overhead cast more than I used too. Why not? Providing I have room behind me, the overhead cast with a two- handed rod from the casting deck on an anchored boat is extremely powerful and allows tremendous distance effortlessly. It offers deadly accurate fly placement and will often result in a perfectly straight fly line that fishes immediately. The fish don’t seem to care that you didn’t do a Spey Cast― at the end of the day, that’s what really matters. 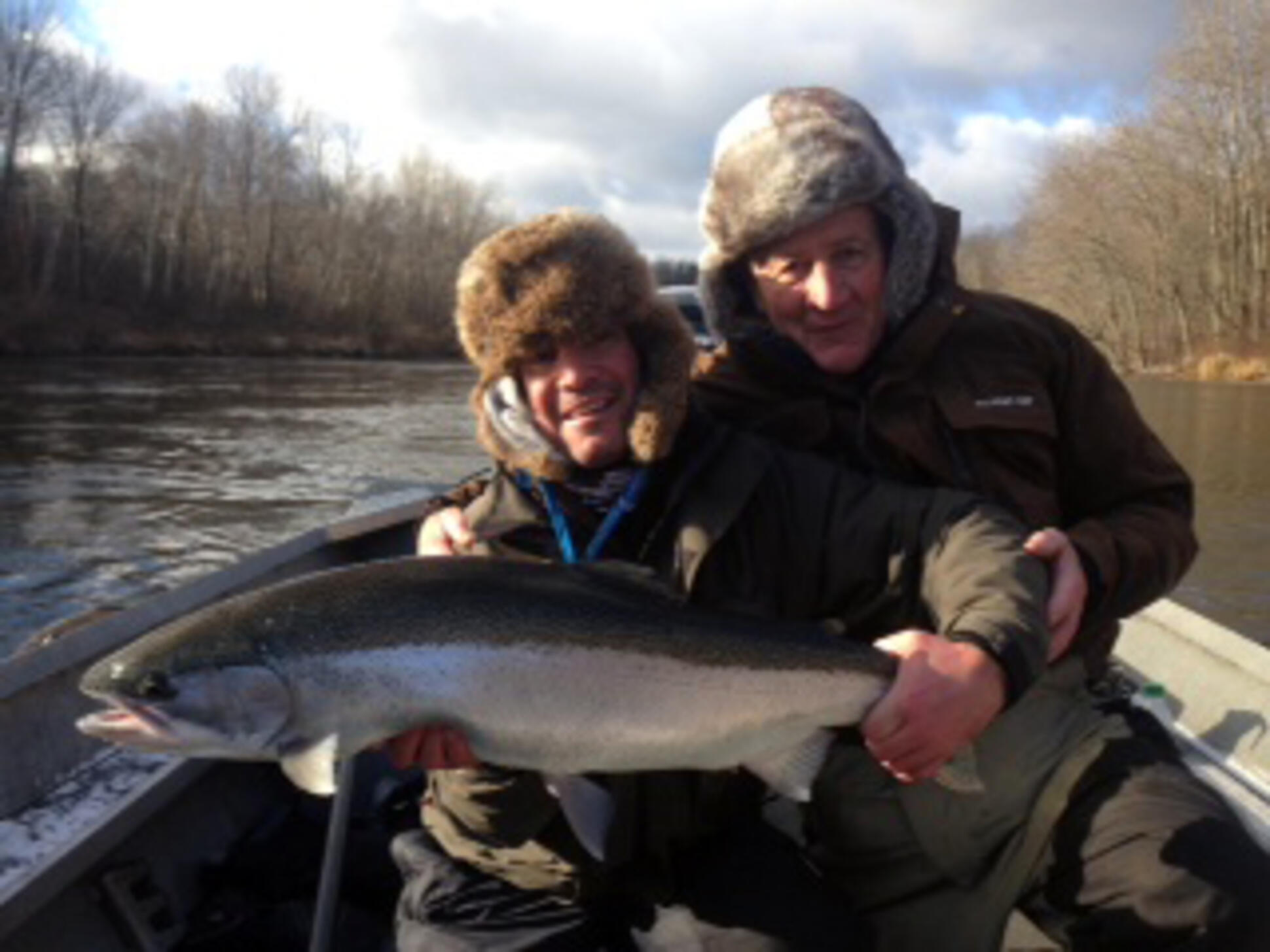