It’s a beautiful sight to witness a spey casting loop shoot through the air, seeming unbounded by gravitational force as it soars over the water while maintaining its tightly compressed symmetrical shape. Then, after the leader and fly turn completely over the line slowly falls to the water’s surface straight to the fly. It always seems more gratifying to hook a fish on a well-executed cast rather than the “ear piercing, cracking whip that piles up twenty feet short of your intended target cast”. When I make a cast and it pulls tight to the reel my confidence level slightly increases regardless of what the fish might think.

A well-executed cast is one that is effortless to perform and delivers the fly accurately with a predetermined presentation. Usually, I prefer the fly line, leader, and fly turn over completely in the air before landing on the water. This will allow for a setup that controls the speed and fly angle immediately upon entering the water. An example of an incorrect presentation often the result of a poor “D” loop that does not properly load the rod on the forward stroke causes the line to unroll on the water as the fly lands further upstream. The fish should not see the fly line swinging into them first while it’s towing a fly that is speeding toward them. In nature this is unnatural as prey usually flees from predators while traveling in the opposite direction. If this weren’t true there would be a lot of fat lazy fish.

The presentation and overall execution of a spey cast relies heavily on the formation of the “D” loop. This is the most difficult element; however, it is the most important. Let’s take a look at a few key points of information in order to understand how to create a better “D” loop. 1) The Anchor Point Placement, essentially the bottom of the “D” loop that makes contact with water, should land slightly in front of a 90 degree angle, one rods length off to your side. This location is optimum for loading; however, it can be placed accordingly based on the amount of room needed behind you to form the “D” loop. 2) Just as important as the specific location where the anchor point is placed, is the manner in which it lands on the water. Once its lands it must stop immediately. It should not touch down then bounce, skip or skate across the surface. 3) The load for the forward stroke is based upon the tension in the “D” loop that is created from a solid anchor point. If the anchor point is moving or not laying on the water or too far under the surface the rod will not properly load. Another important element of the anchor point is that it should be very straight and aiming toward the target that you’re casting to. The “D” loop should be formed 180 degrees opposite of the forward target. The position that you finish in should look like the picture below.

Notice in this picture that the bottom hand is close to the body and the forearm is within several inches of the stomach. The top hand is located close to the height of the chin and while the shoulders are relaxed. At this point the arms are simply hanging with elbows low next to the sides of your body. The rod tip is pointing toward a 2 o’clock position with the reel located at a height just below the shoulders. After executing the formation of the “D” loop and stopping the rod tip in this position there is a subtle hesitation for the formation of the “D” loop to load the rod. If your anchor point is further forward than 90 degrees off to your side, as you might not have room behind you, then your forward stroke will occur without hesitation. 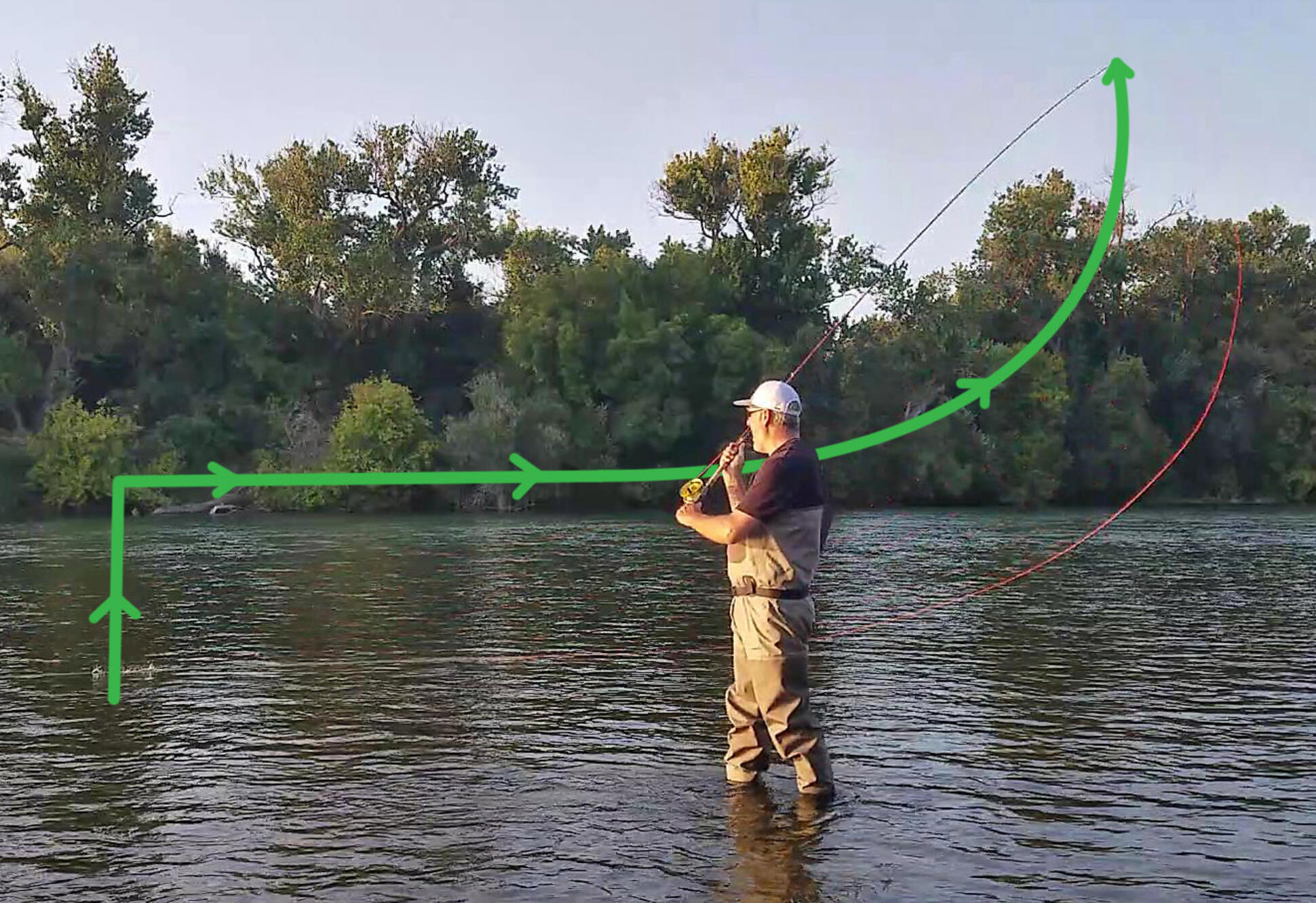 During the setup of the “D” loop there are many subtle errors that are usually made. One of the most common is that the bottom hand tends to push away from the body causing the rod tip to drop toward the water. This will result in the rod tip gradually increasing in height then curving downward toward the water as seen in the picture below. This incorrect curve path is shown with a red line. Usually a loud ripping sound is heard as the line tears off the surface of the water. Use this sound as a teaching aid. If you hear it then watch the tip of the rod follow the entire rod path. By looking at it you will greatly reduce the chance of the rod tip following an incorrect path. After some repetition muscle memory will occur and you will be able to feel it and won’t have to watch with your eyes. 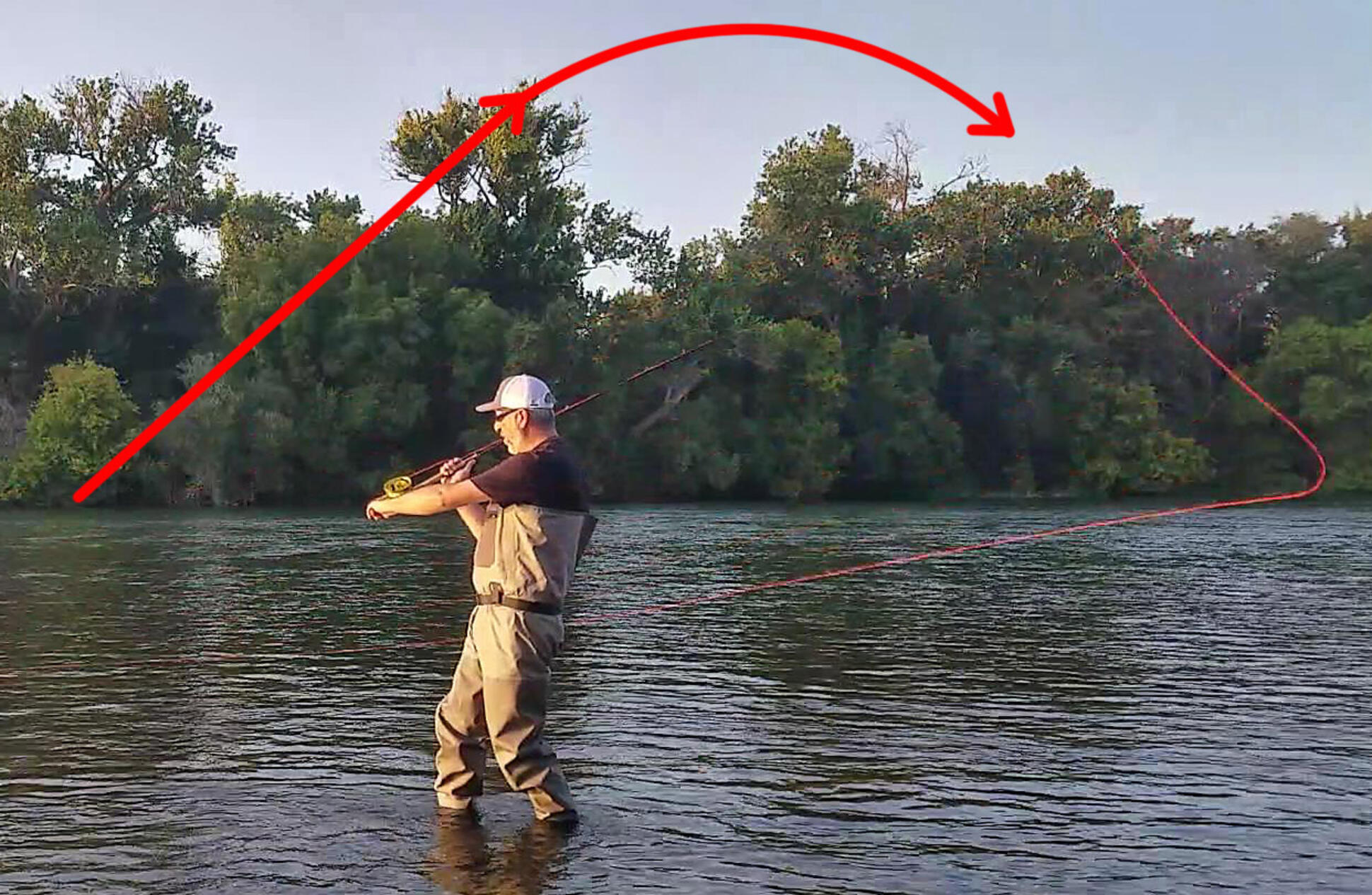 One luxury of using spey rods is the minimal amount of effort needed to cast a fly. There is very little movement of the body including the arms and shoulders. During the execution of a spey cast it is very important to keep the elbows low next to the body. The photo below shows the rod being lifted too high at the end of the casting path. Notice that the hands and reel are positioned above the height of the chest. The arms and shoulders will endure more fatigue than necessary. This exaggerated movement also results in the rod tip dropping downward toward the water while taking away from the formation of the “D” loop which is very evident in the photo. This position is much better for chopping wood rather than spey casting so leave the heavy work for the lumberjacks. 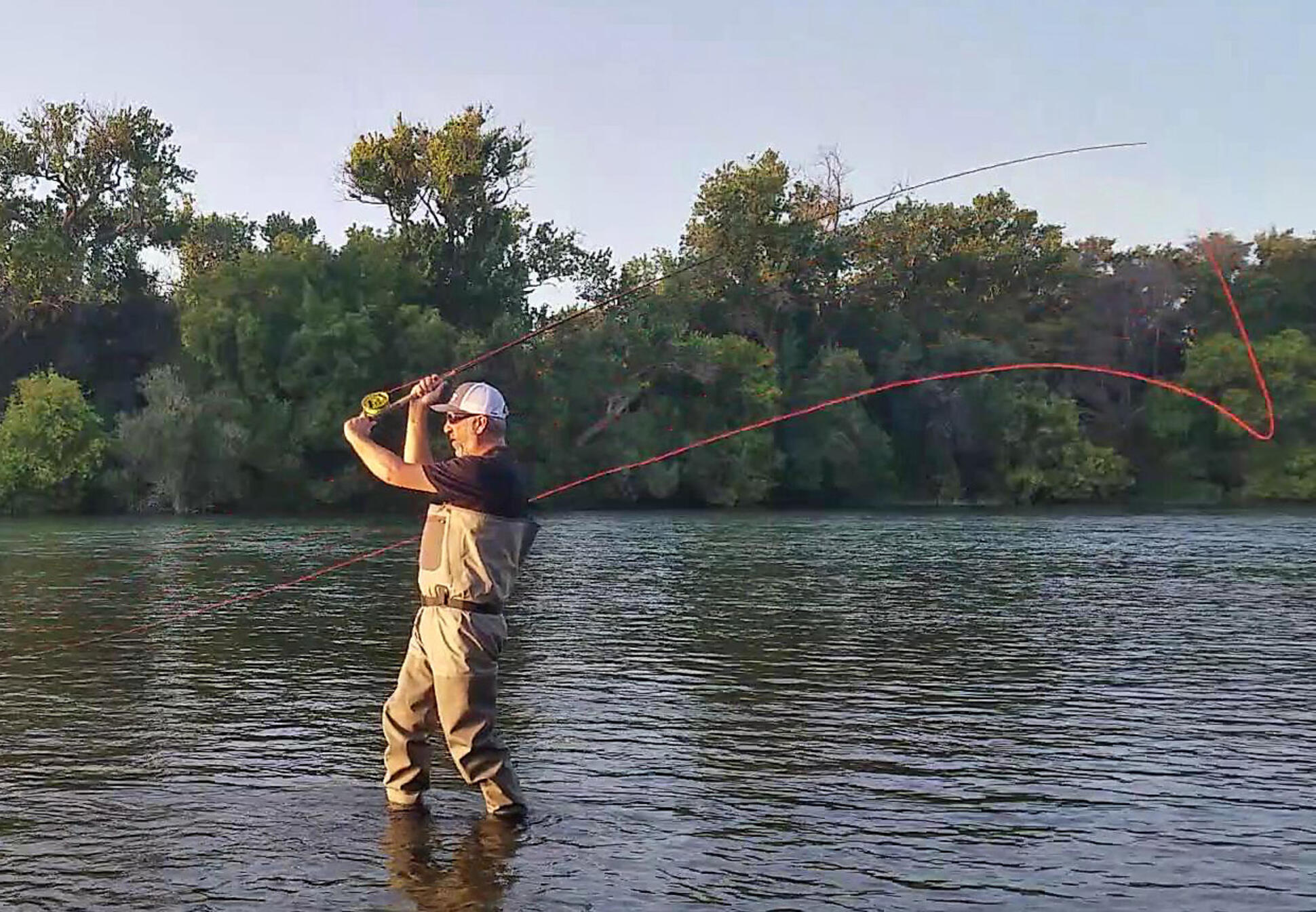 To review… first relax the body including the grip on the rod; keep the elbows lows even when elevating the rod tip to a higher position; watch the rod tip with your eyes until these motions feel natural; and don’t push with your bottom hand instead keep it close to your stomach. And the biggest tip I can give is… slow down and keep your rod tip pointed up.