The first Spey line that I ever purchased came packaged in a box as thick as an encyclopedia. Like a book cover designed to culminate my curiosity, the word ‘Spey’ prominently highlighted the box’s crisp edge and sold me on the promise of its contents.

Encyclopaedic was not far off from what I held in my hands. Rich with knowledge and the possibility of growth, the comparisons were evident — the difference being that with an encyclopedia I had an idea of where to start.

At the time I had just become a proud owner of the easiest Spey line to cast on the market: the WindCutter at fifty-five feet long. The kit included the mid-belly line (already fused to an integrated running line) and a series of fifteen foot sink tips in a compact wallet with a cardboard cut-out to explain the different sink rates. As a new caster, my casting stroke was unsightly and I imitated a flailing backwoodsman while chopping liquid wood with a piece of graphite. It was horrifying.

It was soon thereafter that the popularized Skagit shooting head hit the scene and nothing was ever the same. Half the length of the WindCutter, the short condensed head allowed anglers the option of turning over heavy sink tips and large flies with ease, especially in AV5-400areas with limited back-casting space. This particular line was developed in the Pacific Northwest and was specifically made to be cast with a tip on its thickly tapered end to avoid having its anchor ripped from the water’s surface before allowing the rod to completely load. As a general rule, a sink tip should not be longer than the rod being fished, making most tips somewhere between eleven to fifteen feet lon 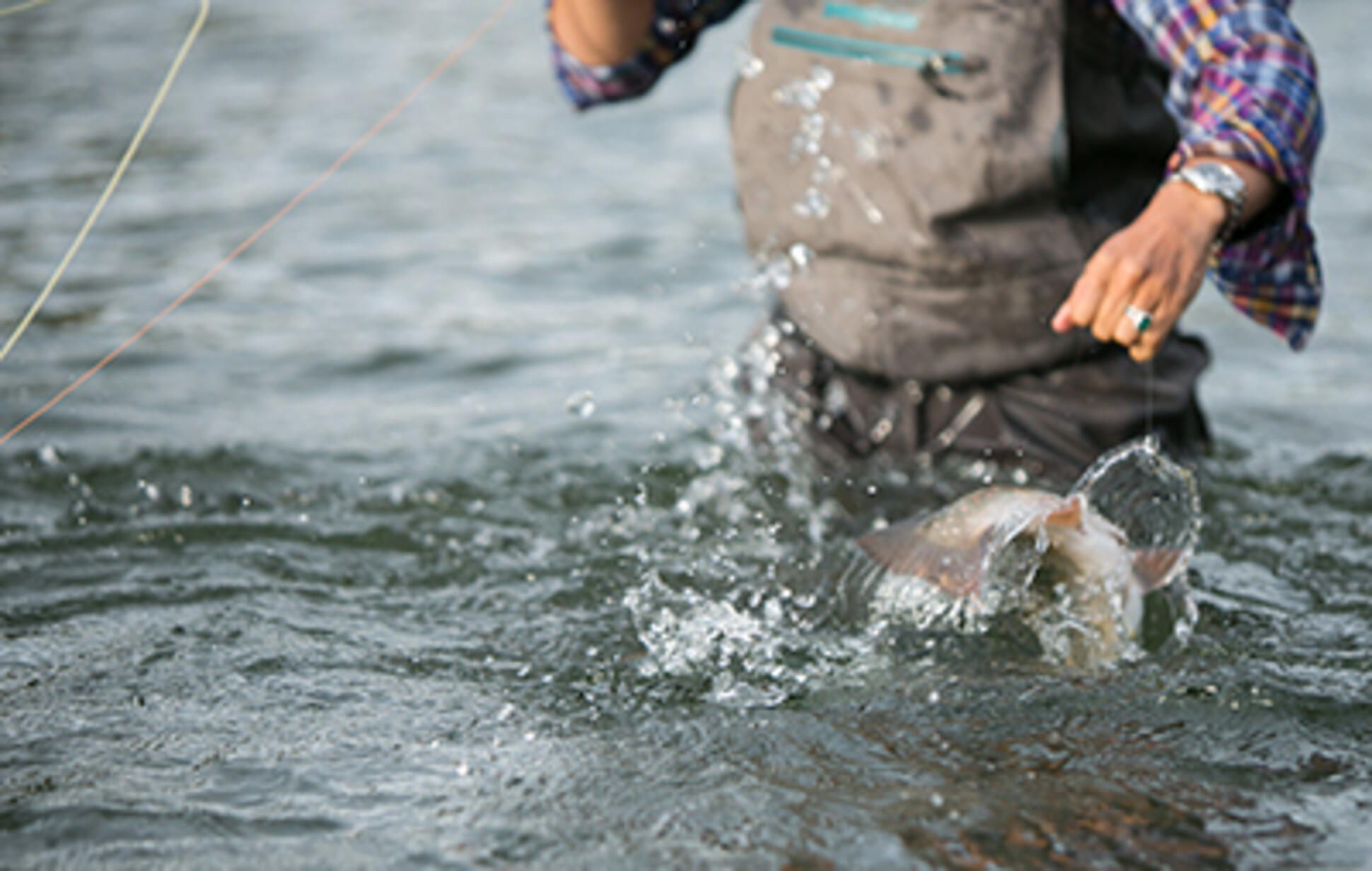 The Skagit line, while deemed the simpler of the line categories to cast, is one that is a blessing to many of us who guide. New casters easily adapt to the stroke of the short line and are able to keep their time on the water more efficient as their fly remains in the water and out of the bushes behind them. With this sudden casting aid, I dusted off my old lead-core lines and began to make my own cost efficient systems. I was not alone in my ventures…

Shops were soon selling tips in various sink rates/lengths in either a home-made tungsten fashion (labeled as T7, T11 or T14) as well as the RIO pre-made tip systems (labeled as Type 3, Type 6 or Type 8). To many customers, the differentiation between the two was unclear. For some, it was the simple matter that both systems were named with words that began with the letter ’T’. Others expressed confusion regarding each’s relation to depth and density. Between the MOW tip, T17 and fused looped tungsten systems and we had widespread befuddlement. With four tip systems available through RIO, the confusion only seems to grow within our clientele. While the systems are rather self-explanatory to those who use them regularly, to some customers this gave them the impression that they were outdated and intimidation set in.

While many of our guests come from overseas equipped with a variety of Poly or VersiLeaders, we have to explain that as a standard rule of thumb such leaders are best cast on a Scandi (or longer line) due to the inefficient energy transfer from the diameter difference between the thick front taper of the Skagit line and the butt of the aforementioned leaders. With that in mind, I had thought that a clear explanation of the very basics of Skagit sink tips might be nice.

I reached out to Simon Gawesworth of RIO to clarify the mystification, and have simplified it here for you in hopes that it may make your time on the water a little more enjoyable.

The original fifteen foot tips come with a color coded welded loop that indicate the tips’ density (or in this case, sink rate) and the weight of the rod/line weight it should be used on. One will note that the heaviest tip (type 8) is thinner than the lightest tip (type 3), thus explaining how the system works.

Such tips are tapered and allow for a much better presentation than their level tungsten relatives. They come in the following:

Intermediate (1.5 to 2 inches per second)

To ensure consistency as a balanced outfit, each tip is given a standard weight (measured in grains) per weight class of rod.

These tips are level (non-tapered), fast sinking, and designed to be cut to a desired length. Their lack of taper delivers them with a “punch” and large flies roll over without much effort from the caster.

Quite opposite to the density of the ‘Type’ tips above, these lines sink as per the amount of grain weight they have per foot. In the case of ’T’ tips, this equates to the amount of tungsten impregnated into each foot of the tip (for example, T8 weighs eight grains per foot).

Available in ten and twelve foot lengths, the Mow tips come in light, medium, heavy and extra heavy ratings. They are of the same tungsten material as the ’T’ tips and translate to:

So what’s the difference between the MOW and the ’T’ tips you ask?

There are times when an angler is looking to specifically sink their fly into pocket water or behind rocks/structure without the use of a full tip. At times, just a mere two feet of sinking line is required to get the necessary presentation to catch a fish

The dilemma here is that a two foot sink tip wouldn’t allow the short compact anatomy of a Skagit line to anchor in the water without “popping” itself from its loading sweet-spot.

The MOW tips feature six different tips with differing lengths of sinking sections seamlessly fused to a floating line. Each of the below blended tips is available in the light, medium, heavy or extra heavy as mentioned above.

best with a light, medium, heavy or extra heavy class, the RIO recommendations are that:

Personally, even after gaining an understanding of the above explanation, I still find myself favoring the same sink tip I once did as a bright-eyed Spey hopeful: a 15 foot, faded grey to white ‘type 6’ fifteen foot tip (now slowly nipped down to about 13 feet). Fishing it differently, depending on the situation at hand, there are times where I high-stick it, times where I dump slack into it, times where I walk it through a seam with side-drifted tension, and the frequent occasion where I just let the pushy current fondle it as it sees fit.

Like all things casting, mathematics and physics are the sole components of the efficiency of proper rod load. Both are equally as essential for comprehension of how objects of various densities/materials sink with varying current speeds or hydraulics.

Truthfully, one could spend a lifetime trying to analyze every factor that plays a role in a presentation that they feel the fish prefers to see… or one could find something that simply works for them and just go fishing.