RIO Pro Jon Cave writes about fishing for Redfish and Seatrout in their lagoonal habitats. He provides many great tips – from flies to technique to gear that works.

My home waters of Mosquito Lagoon and redfishthe adjacent Indian River in East Central Florida have a deserved reputation for being premier fisheries for redfish and seatrout – particularly in the vicinity of the interconnected federal lands of Merritt Island National Wildlife Refuge, Canaveral National Seashore, and Kennedy Space Center. The waters adjoining these federal boundaries are known as much for having trophy sized fish as they are for the large populations of both species. Reds over 10 pounds are relatively common with an occasional specimen exceeding 35 pounds. Seatrout frequently top 5 pounds and fish weighing well over 8 pounds are not at all unusual. While the high quality of the fishery is undeniable, it’s the sight-fishing opportunities that make the area stand-out amongst redfish enthusiasts who relish the challenge of stalking their prey in clear-watered flats.

Reds and trout are closely related members of the Sciaenadae, or drum, family and therefore share many similarities. Both frequent the same general lagoonal habitat of broad grass flats intermixed with occasional sandy potholes, oyster bars, tiny islands, and shorelines of mangroves and/or spartina. Trout and reds won’t venture far from a nearby available food source and that is one of the keys to locating them. Depending on seasonal variations, mullet, menhaden, penaeid shrimp, and various crabs make up the bulk of the diet of both gamefish. Since reds and trout share the same general habitat and preference in prey, the same flies, tackle, and techniques work effectively for both fish. As a matter of fact, fly fishers often catch one species while looking for the other.

For both species, I opt for one of myPaul Cave w/ seatrout Wobblers about 95% of the time. Its flashy oscillating movement consistently draws interest from reds and trout and the fact that it does not spin prevents the line from twisting, unlike other so-called spoonfly imitations. Dorsey’s Kwan is another favorite for shallow to medium depths and a Clouser Minnow is very effective when fish are hanging close to the bottom on deep flats and around drop-offs. During early morning hours and on cloudy days when low-light limits sight-fishing opportunities, blind-casting with a deer slider and then stripping it across the surface can draw a vicious strike from one of the area’s huge “gator” trout or a cruising redfish as well. When a soft presentation is required for tailing redfish, I normally opt for a Saltwater Muddler tied bendback style or a Lil’ Wobbler.

Six- through nine-weight gear can be utilized for sight-fishing both redfish and seatrout. I Paul Cave w redfishrely on a 7- or 8-weight for the majority of situations, but often opt for a 6 for small- to medium-sized fish. A 9-weight is normally reserved for casting big flies on those occasions when big “bull” reds are in an area.

RIO’s Redfish Taper is the best all-round fly line choice for reds and trout as it is designed to turn over relatively large and/or heavy flies even under conditions that are frequently windy. It also loads the rod quickly and thereby reduces false casting for quick presentations that are the norm when sight-fishing. However, when it’s calm, I keep a separate outfit on hand that is rigged with RIO’s Bonefish line because it lands a little softer on the water and is less likely to spook fish – especially when they’re tailing. For drop-offs, lines with a sinking-tip like theRIO products pro Jon cave with Redfish on fly Saltwater Tropical F/I or Tropical Outbound Short are needed to get the fly down in the strike zone.

A 10’ RIO Light Saltwater Shock Leader is perfect for using with subsurface flies. The high density of the leader’s fluorocarbon shock tippet helps sink a fly so that it won’t ride-up in the water column when stripped in. For topwater sliders, I prefer a 9’ Redfish/Seatrout Tapered Leader to which I attach an 8” – 10” RIO Max Plus 30# test monofilament shock tippet because the relatively neutral density of monofilament keeps the deer hair slider floating higher on the surface than if a fluorocarbon shock tippet is used.

The lagoons offer many unusual contrasts – natural beauty next to space-age technology; peaceful manatees sharing the water with motorized watercraft, and pristine wetlands bumping up against waterfront condos. Despite these dynamics, the lagoons remain one of North America’s premier saltwater fishing areas – a mecca for those who delight in casting flies to big redfish and seatrout in transparent water. 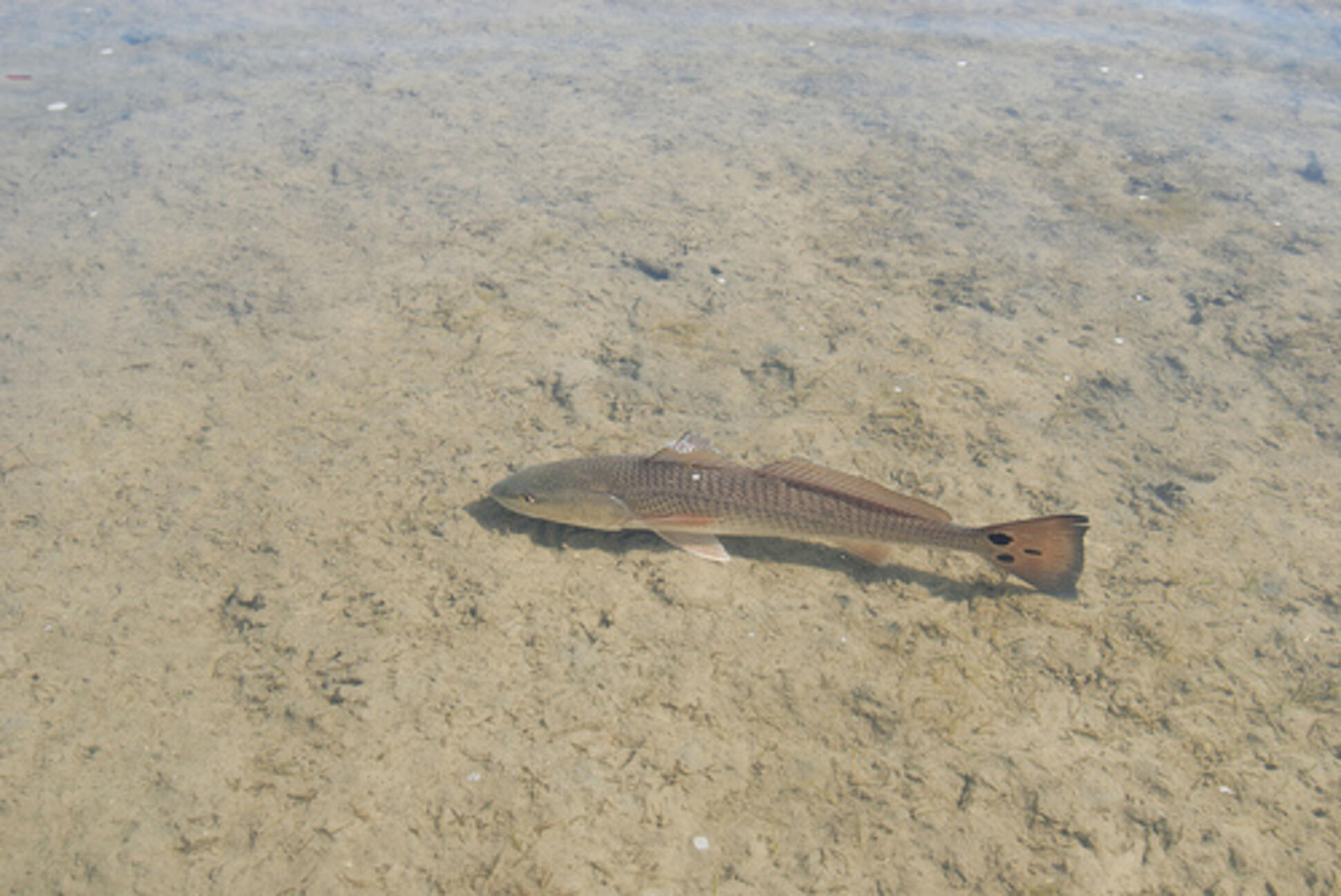 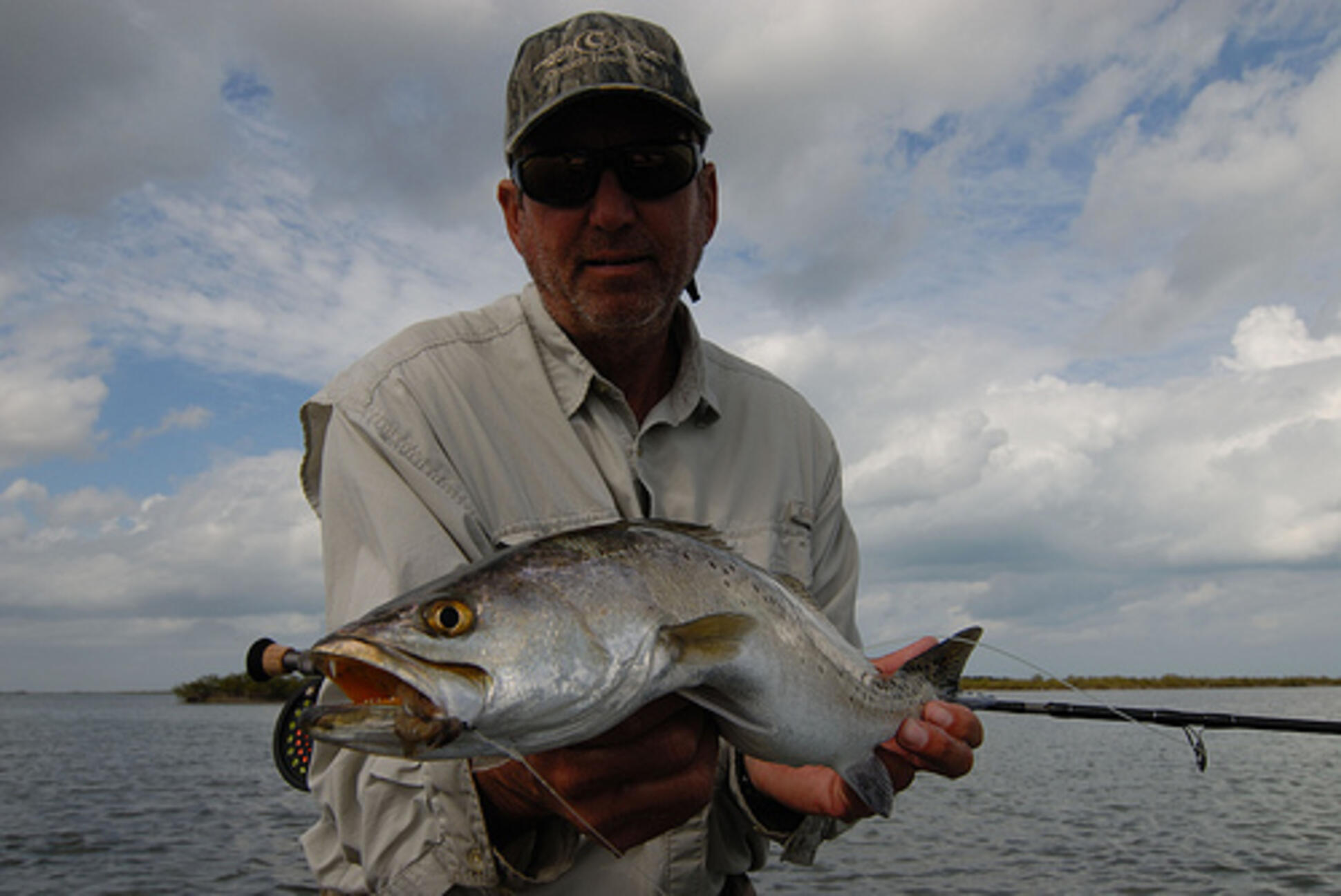 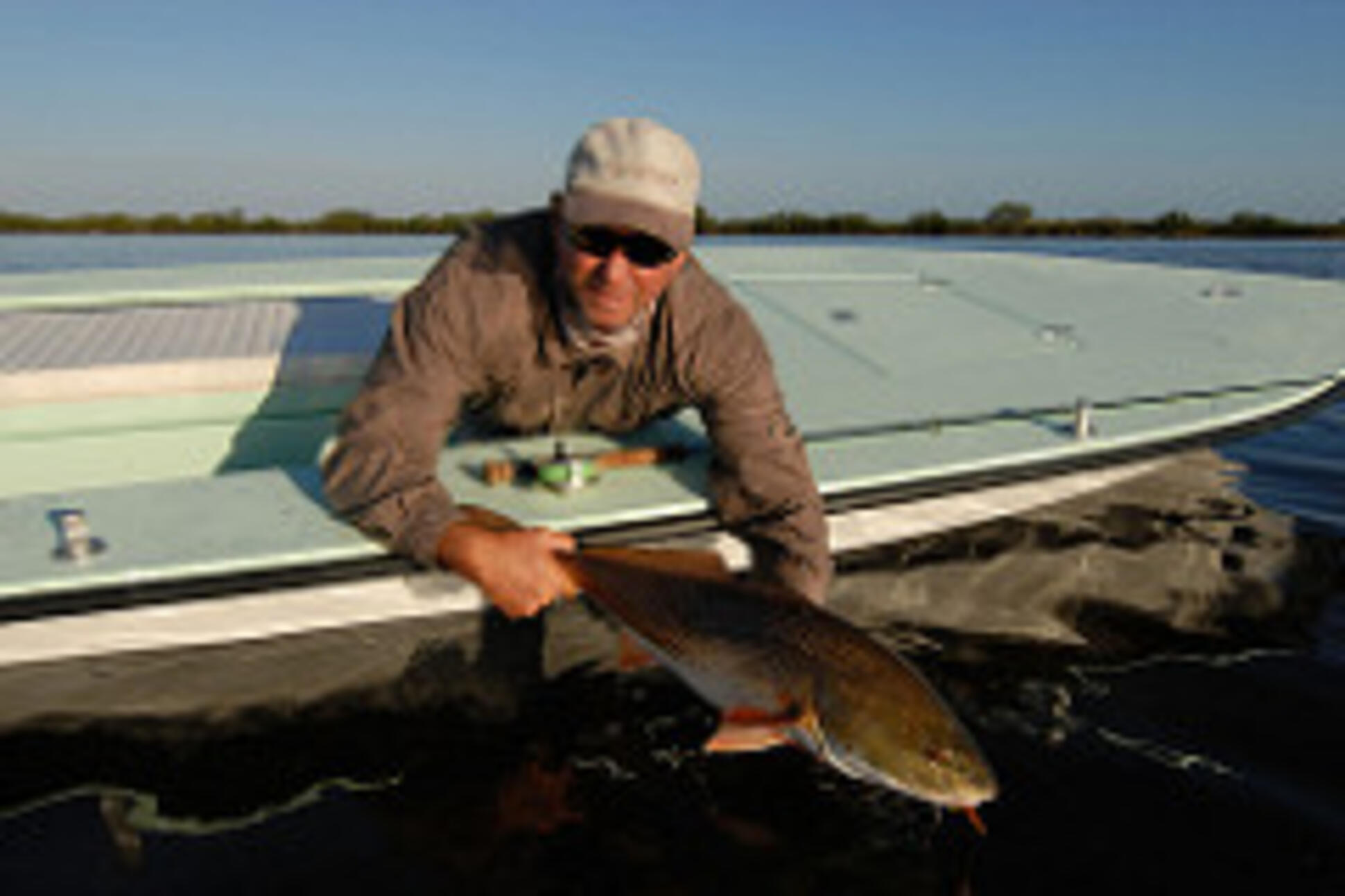 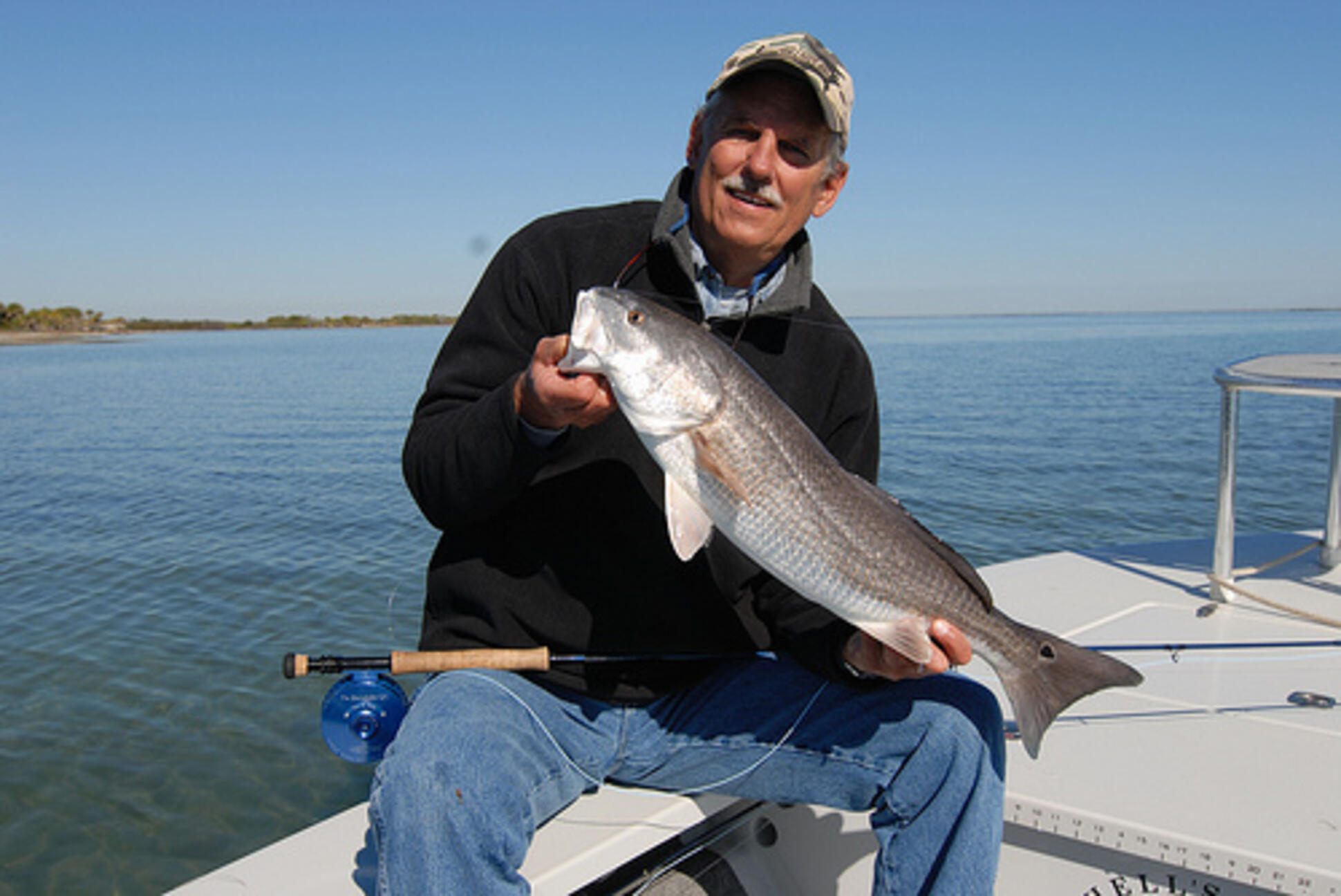