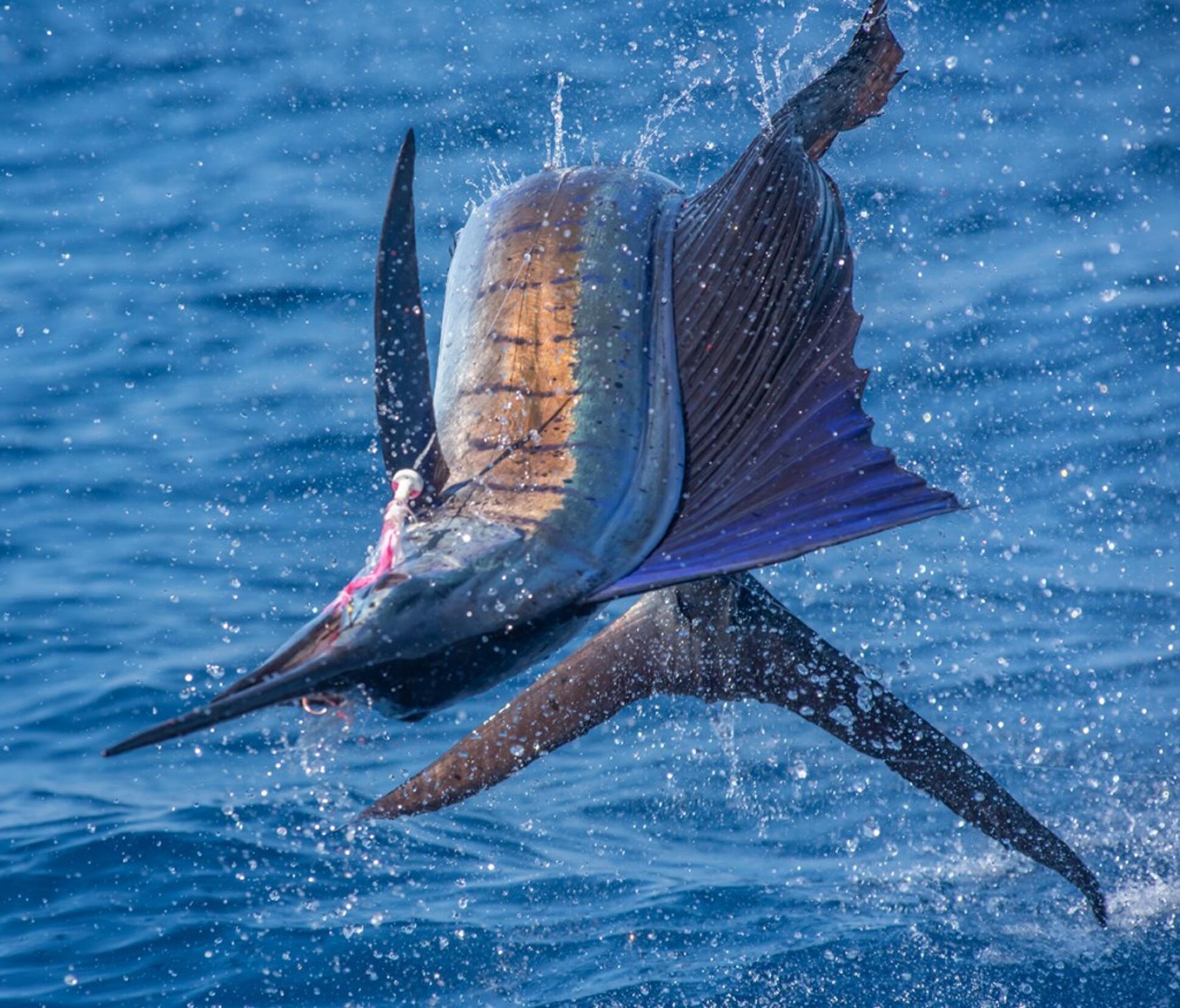 Fly-fishing for billfish is definitely a think-outside-of-the-box situation for most fly anglers. Still, there is a growing group of fly fisherman who embrace the challenge.

Put Me In, Coach

Successful bill fishing is a team sport. That team generally includes a captain, two mates, and the angler(s). Like with any team, everyone has a position. The captain handles the boat and decides where to look for fish, while the mates rig teasers, keep them in the proper position in the water, and tease the billfish into fly-casting range. The anglers’ job is to precisely deliver the fly and hook the fish—and it’s not as easy as it sounds. Believe it or not, fighting and landing the fish are the easy parts. 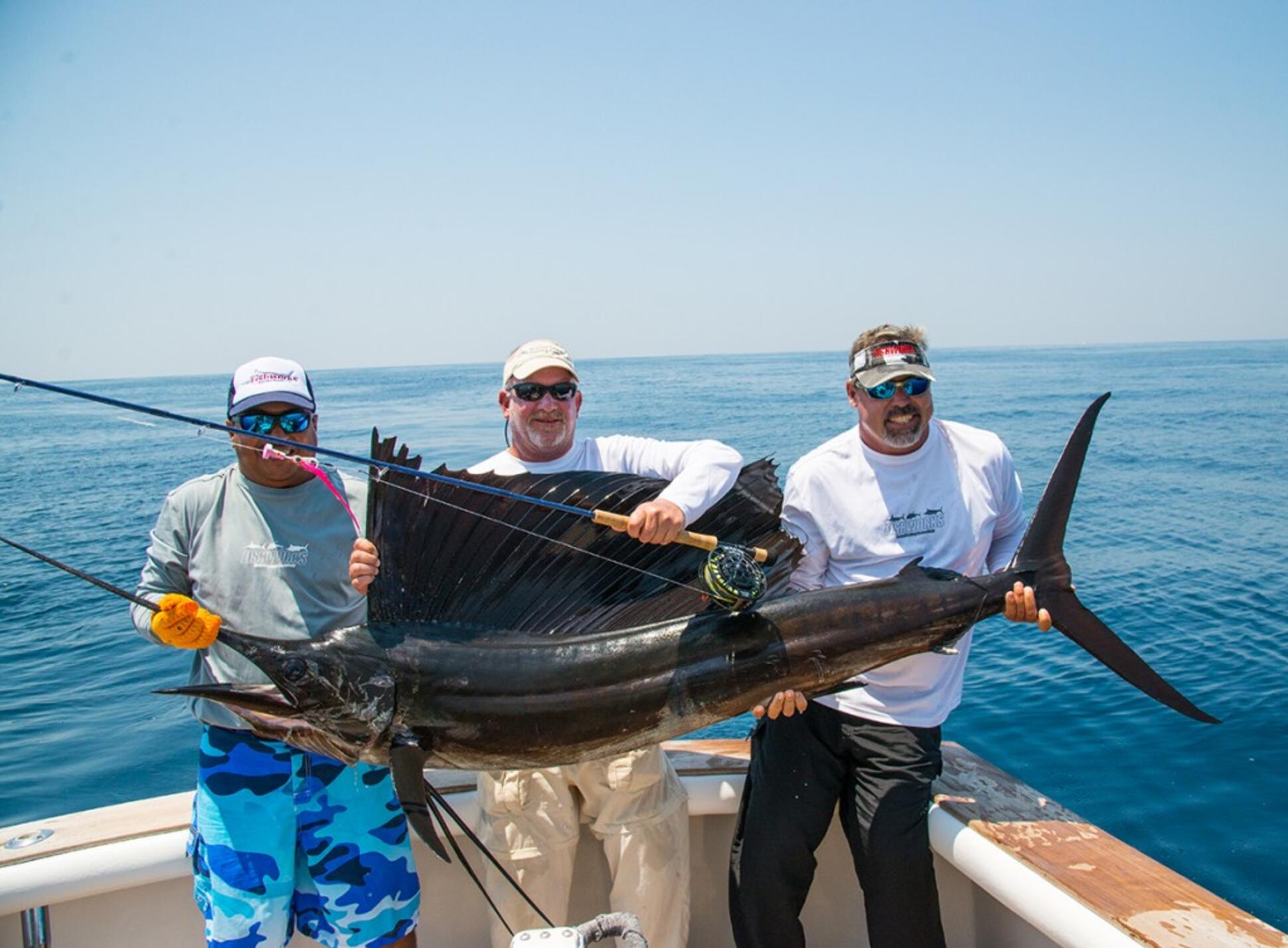 Rigging fly lines, flies, rods, reels, and properly setting the drag have evolved over the years, making landing a billfish on the fly much quicker and easier. In the past anglers would use 80-foot long floating billfish line, or an 80-footer cut down to 60 feet. The problem with this setup was when they hooked a really hot fish the large diameter of the line would cause big bellies in the line. This often would create enough drag to part the 20-pound tippet.

As anglers caught and released increasing numbers of sailfish—but continued to lose many bigger fish, such as blue and striped marlin—they began to try out different fly line configurations. Over the years, anglers like Captain Jake Jordan came up with a very effective fly line system that is now the standard in Guatemala—one of the hottest spots in the world for billfish on fly. 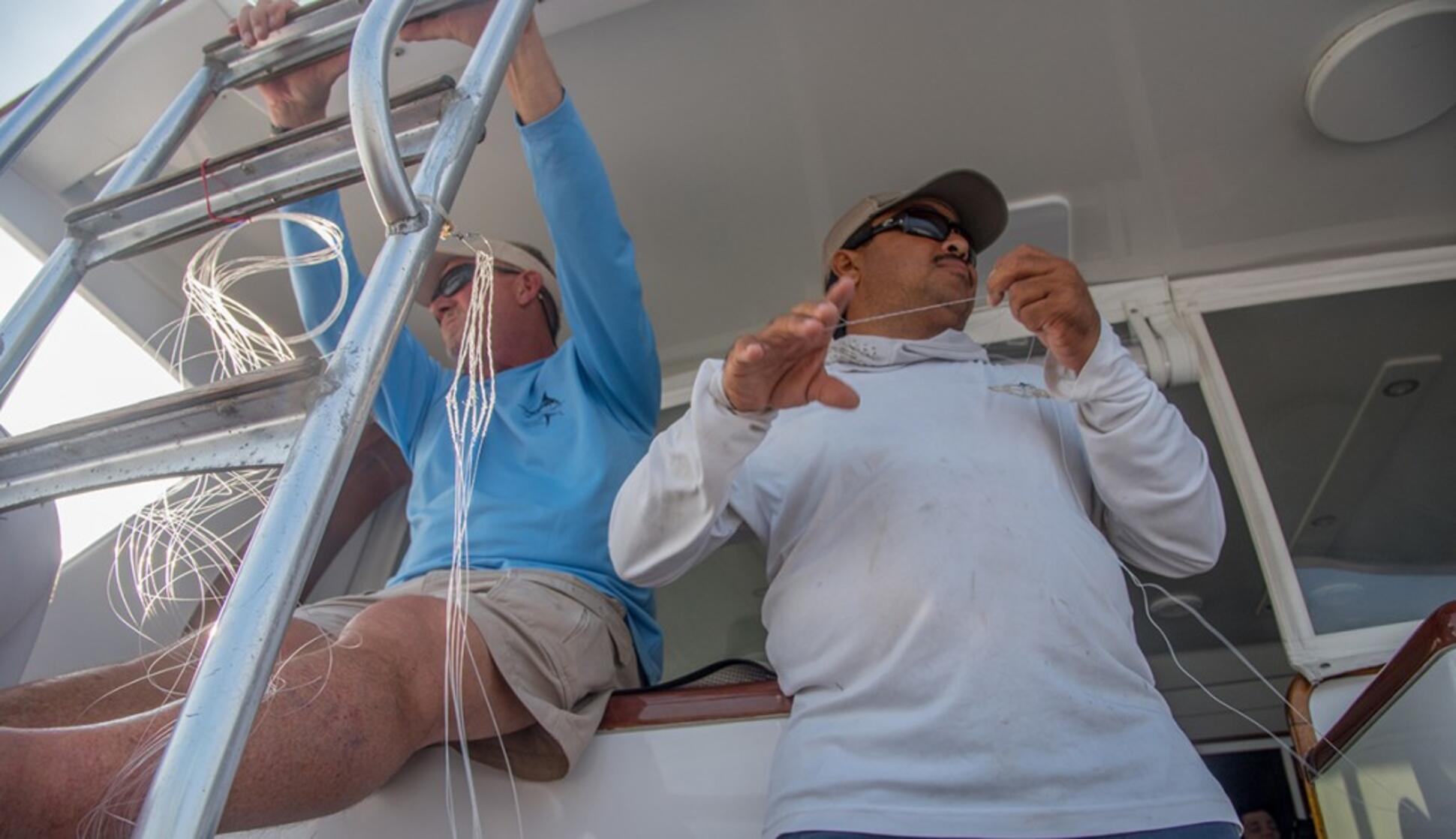 The system is made up of several parts. It is basically a shooting head system with a mono running line. The head is a Billfish Shooting Head, which has a 550-grain, 30-foot head. It is connected to an 80-foot section of 50-pound, hi-vis mono, which terminates at the new 2 Tone Gel Spun Backing. The mono acts a shock absorber—it will stretch 20 feet before the 20-pound tippet breaks.

All connections are made with Dacron loops that are whipped to both the fly line and the mono. The butt section is eight feet long and made of 60- to 80-pound mono. It has a Dacron loop on the back end that connects to the loop on the shooting head, and a loop on the forward end that connects loop-to-loop with the tippet. The tippet is 20-pound test with a Bimini twist on each end and 12 inches of 80-pound shock. This produces a knotless system that can go in and out of the rod guides at an alarming speed without hanging up on the guides. 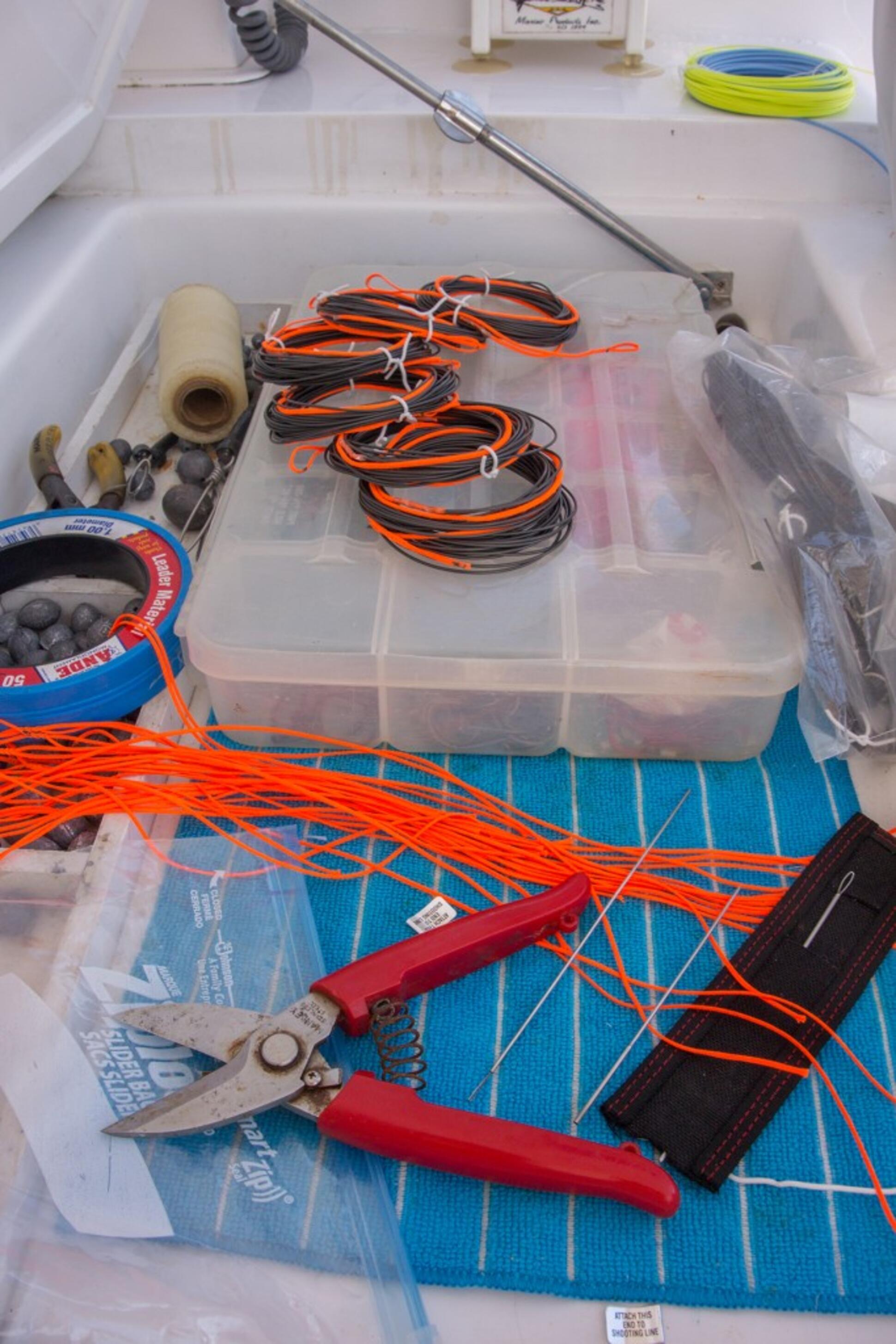 Fly rods for billfish need to be stout, such as Sage’s SALT series in 13- or 16-weight flavors. The Sage SALT 16-weight is the preferred rod weight by most billfish fly anglers. Why a 16-weight for an 80- to 120-pound sailfish? It is all about being able to put the heat on the fish if they go deep; sailfish can be a bear if they go deep. The more pressure you can put on a sailfish with a 20-pound tippet the more it will jump—and the quicker the angler can land it. This is better for both the angler, and the fish.

The most important thing to look for in a billfish fly reel is the drag—and large-arbor reels are preferred. Consider reels such as Sage’s 8000 Series, Tibor’s Pacific, Gulfstream, Billy Pate Bluefin, or Mako’s 9600 and 9700 series reels. Drags are set to 5.5 to six pounds for sailfish. This amount of pressure will keep the sailfish jumping and provide the angler and crew the stunning visuals a pirouetting sailfish can deliver. Blue marlin are not encountered as much as the sails and drags must be backed off to around two to three pounds just to survive the first blistering run. The drag is slowly dialed up as the fish tires out during the fight.

Pink and white Cam Siglar Big Game Tube Flies are pretty much the standard fly. These are rigged with twin Gamakatsu 5/0 Octopus hooks. Other colors of flies work well but generally produce no better than the pink and white. Sailfish are tempted up to the stern of the boat with teasers. When one is within firing range the teaser is removed from the water while the fly angler simultaneously casts the tube fly in its place. If you’re lucky, the sailfish will attack the fly. Fish on!

Brian used the mentioned the following RIO products to catch billfish on a fly...