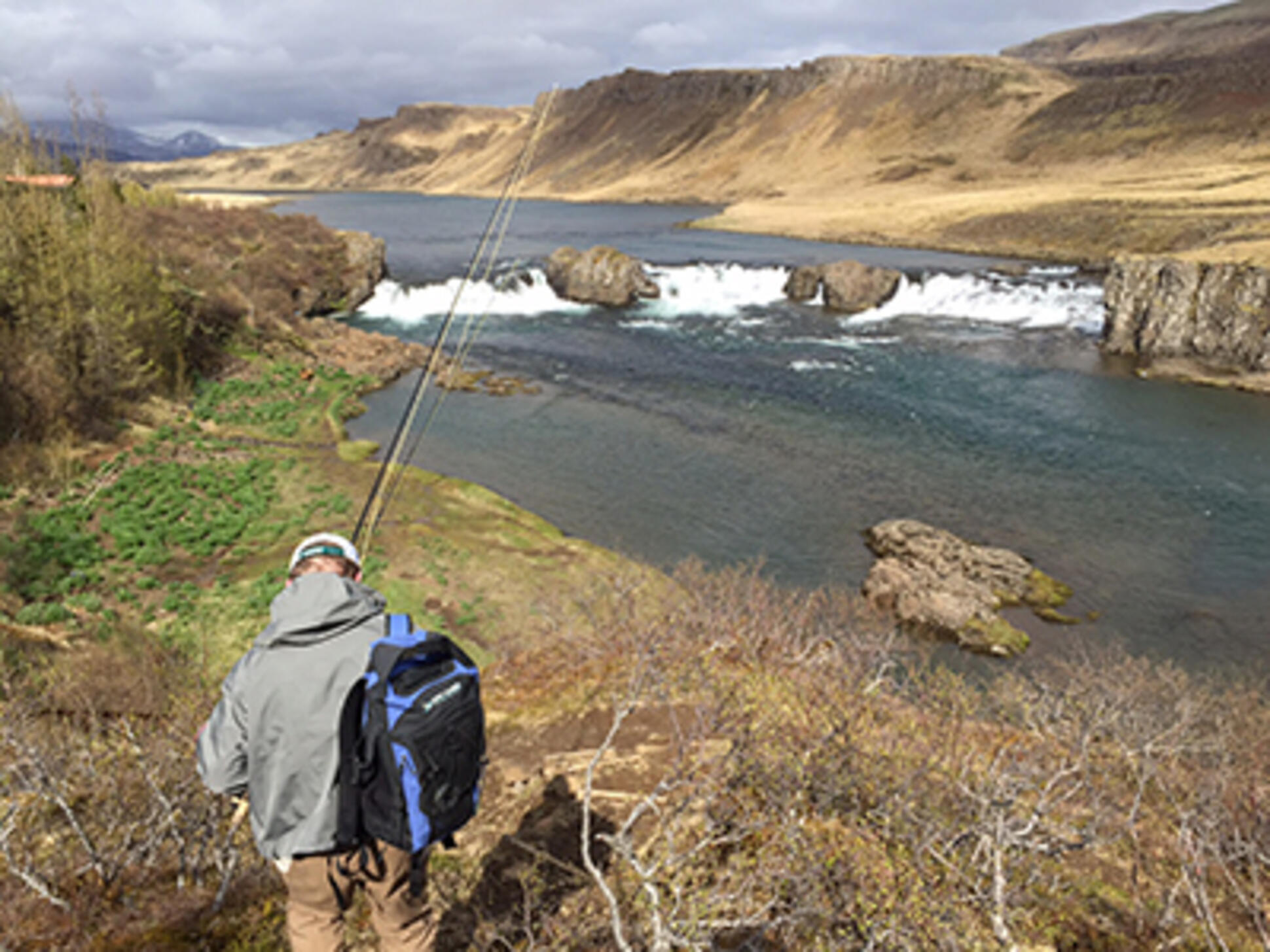 This was the 3rd day of the 2015 season on the Nordura – one of only two rivers in Iceland to open at the beginning of June. A long, cold spring had ensured unseasonably cold water temperatures, but good water flow. The river was only 41 degrees and the air not much warmer at 44 degrees. Despite this, the river had seen 12 fish landed in the first 2 days, and so expectations and hopes were high.

If you are not used to it, there is a fairly strange fishing system employed in Iceland. Your day of fishing is split into two blocks of 6 hours; fishing either from 7am until 1 pm, and then from 4pm until 10pm, or fishing the afternoon session first, overnighting at the lodge, and then having the first shift next day. Nobody is allowed to fish outside these hours as the river and pools are rested. Also, you rotate throughout the beats that are available, so you don’t end up fishing the same piece of water too often.

Upon arrival at the lodge, Johannes and I were informed we had been drawn beat 2 for the Sunday afternoon, and then beat 3 for the Monday morning. Beat 2 had the legendary “Foss” (waterfall) with a wonderful holding pool below the falls, and at this time of year the falls should have a few fish stacked up below. 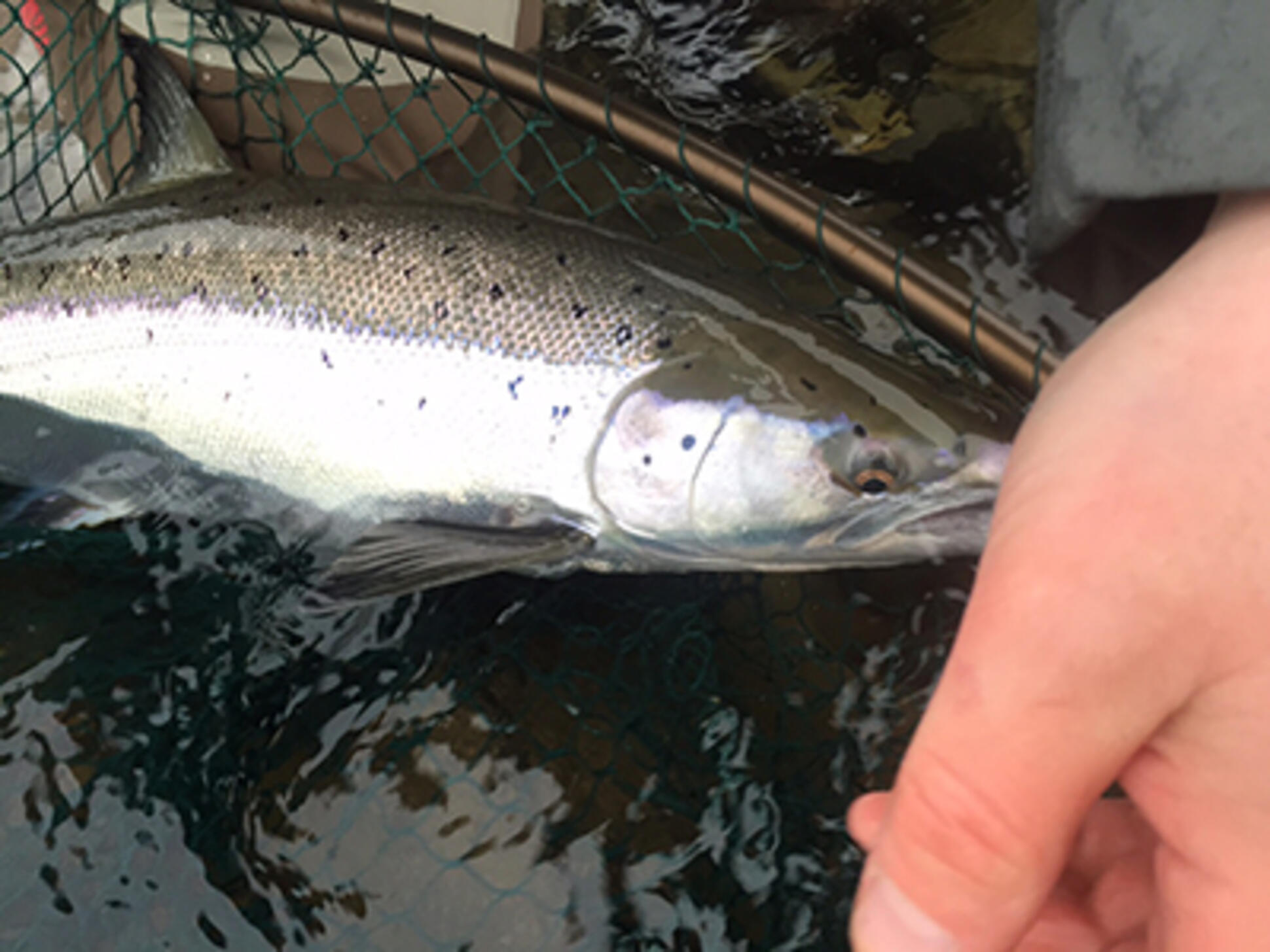 Upon arrival at the lodge, Johannes and I were informed we had been drawn beat 2 for the Sunday afternoon, and then beat 3 for the Monday morning. Beat 2 had the legendary “Foss” (waterfall) with a wonderful holding pool below the falls, and at this time of year the falls should have a few fish stacked up below.

Johannes and I fished a “shared” rod, meaning only one person could fish at a time, and he would go through the pool, followed by me, and then you keep repeating this alternating system for the duration of the day. On Beat 2 we only had a single pool, which meant we went through it about 10 times in our 6 hours (though from both sides of the river), which could have gotten monotonous if it wasn’t such a spectacular piece of water. 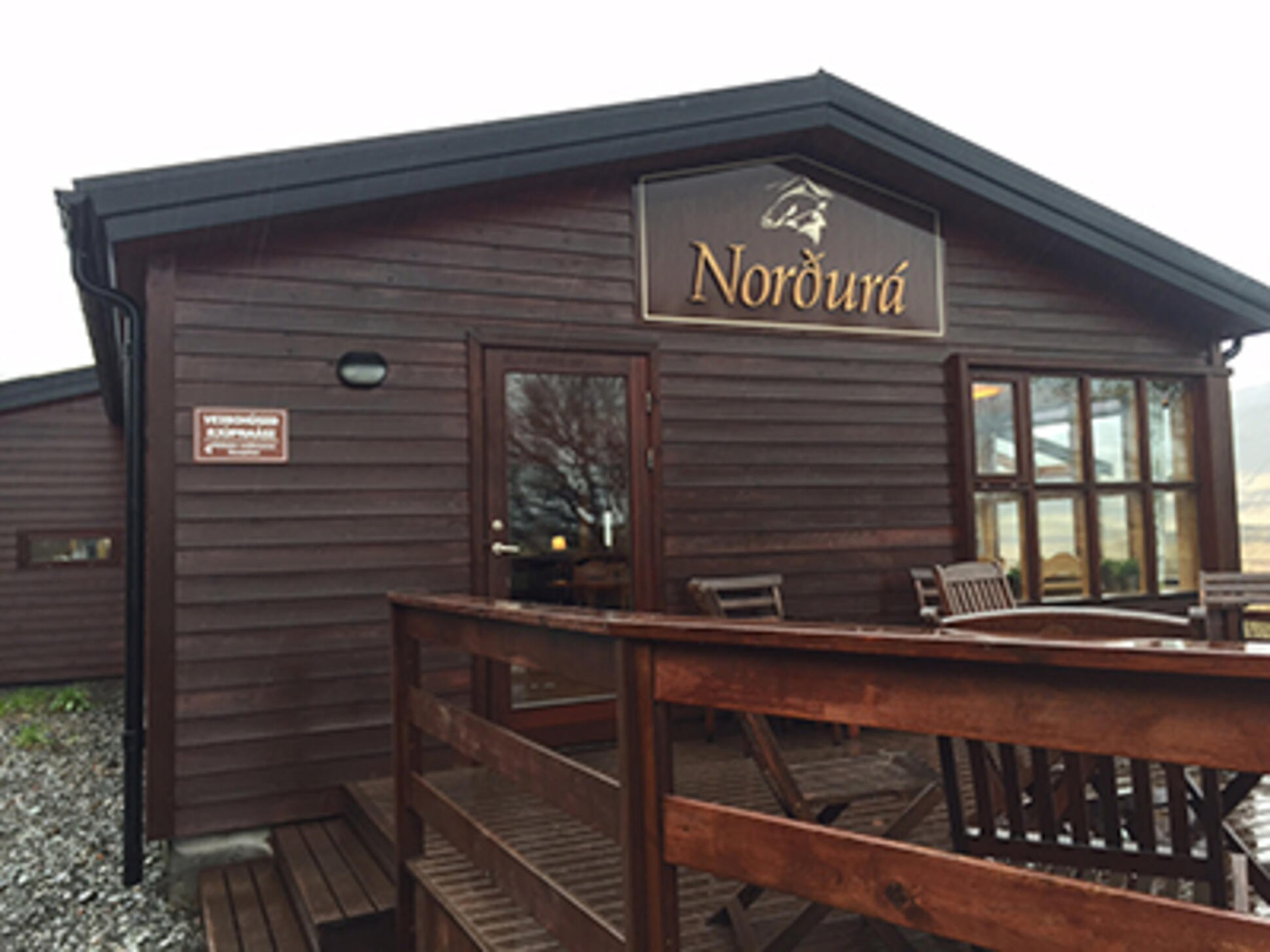 A couple of fresh salmon jumped in the Foss pool during our afternoon, and we worked hard to try and entice them to eat. Johannes started by skating a riffle hitched plastic tube on the surface and from then on we changed fly size, depth and swing speed. After no grabs in the first 4 passes, I switched to a fast sinking tip – something I would have fished from the outset in Scotland – and a large, weighted tube fly. This did the trick, and half way down the pool with this rig I had a soft, gentle take, which I lifted into, promptly hooking my first Icelandic Salmon. Though silver as a pin, and so fresh that scales were falling off, the fish did not have sea lice on. It was 75cm long, and about 8lbs

We didn’t get any other action that day, and left the cold, windy river with rain lashing down a couple of minutes before the scheduled 10pm finish.

Next morning the river had risen and there was a hint of color in the water. It was blowing hard (up to 25mph), was bitterly cold and with rain still coming down, so pretty brutal conditions for June! Johannes and I fished through the main 4 pools on the beat without a grab, until arriving at the last pool on the section; just above a powerful rapid, and with a deep, slow inside edge – it looked like the only possible place to have a realistic chance. Sure enough, half way down this pool I had another very soft grab and hooked into an almost identical fish – this one covered in lice. The sink tip and big tube had done the job again, and after landing it, I told Johannes I was content and would leave him to fish the rest of the session, while I thawed out in the lodge! 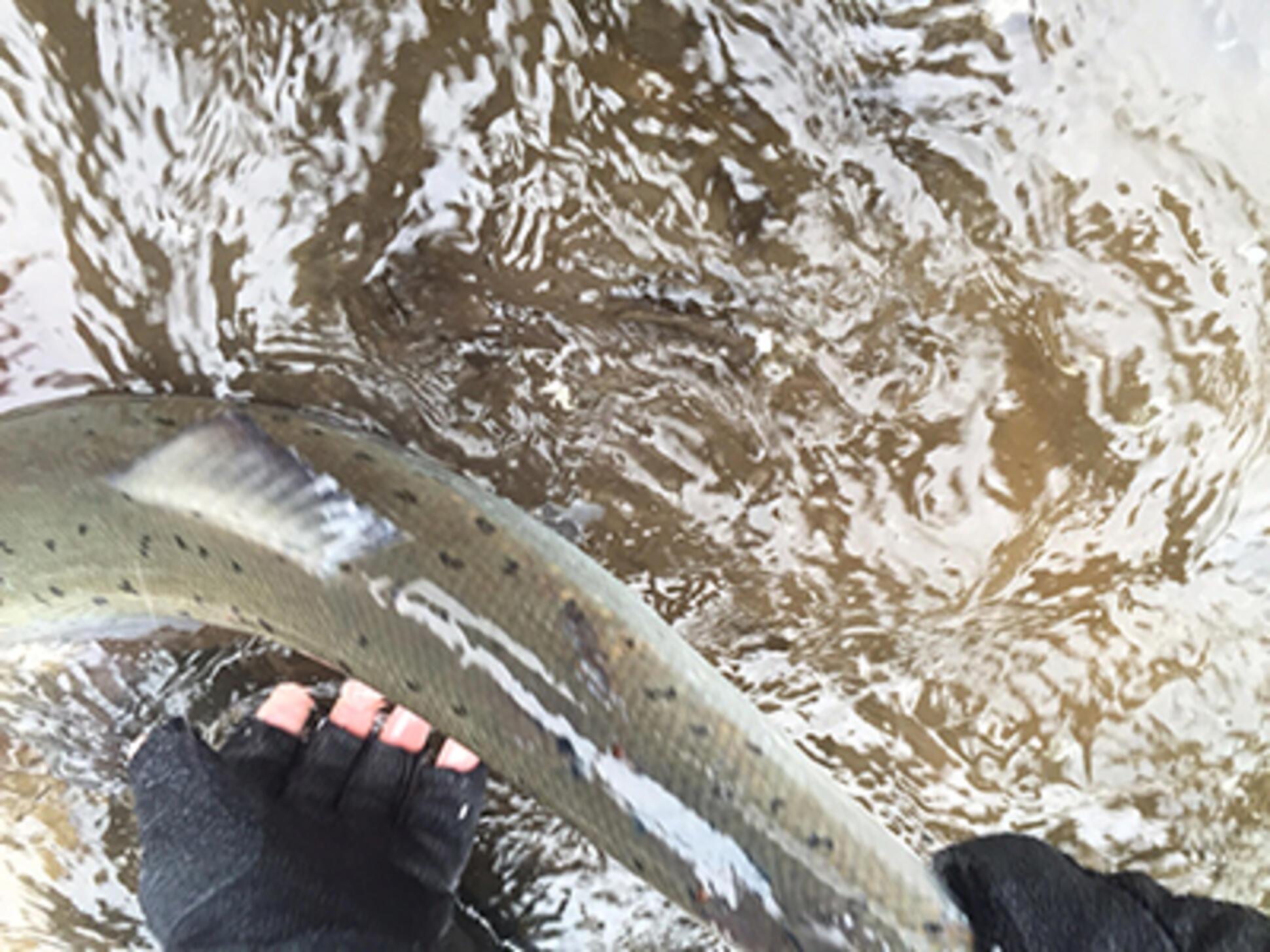 Iceland is an incredible country, and with easy flights from most big US cities direct to Reykjavik, and then on to Europe, it is an excellent place to stop off for a couple of days fishing on your way to Europe. I would thoroughly recommend this to anyone, but remember to take your thermals – even if you are fishing in June! 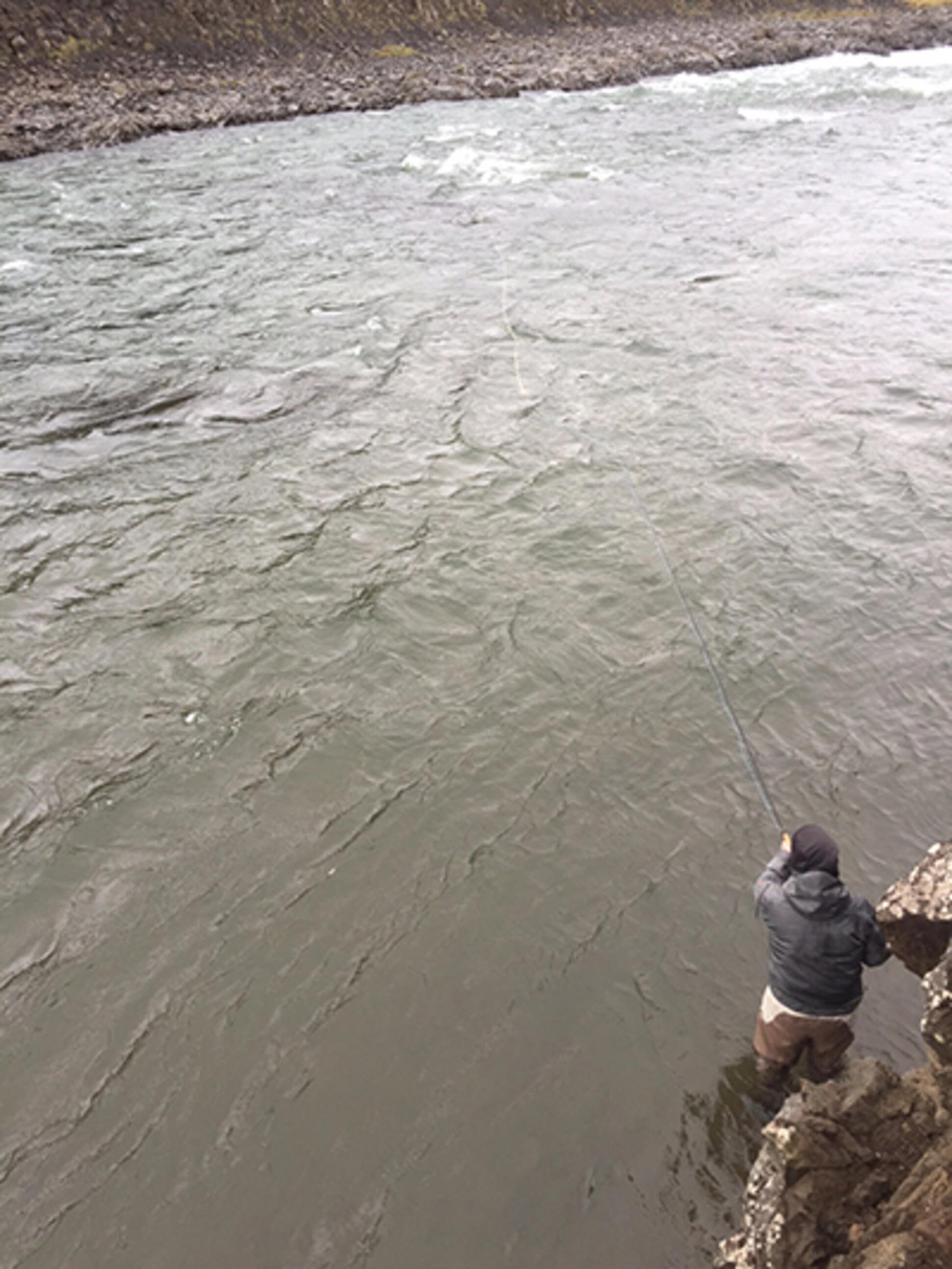