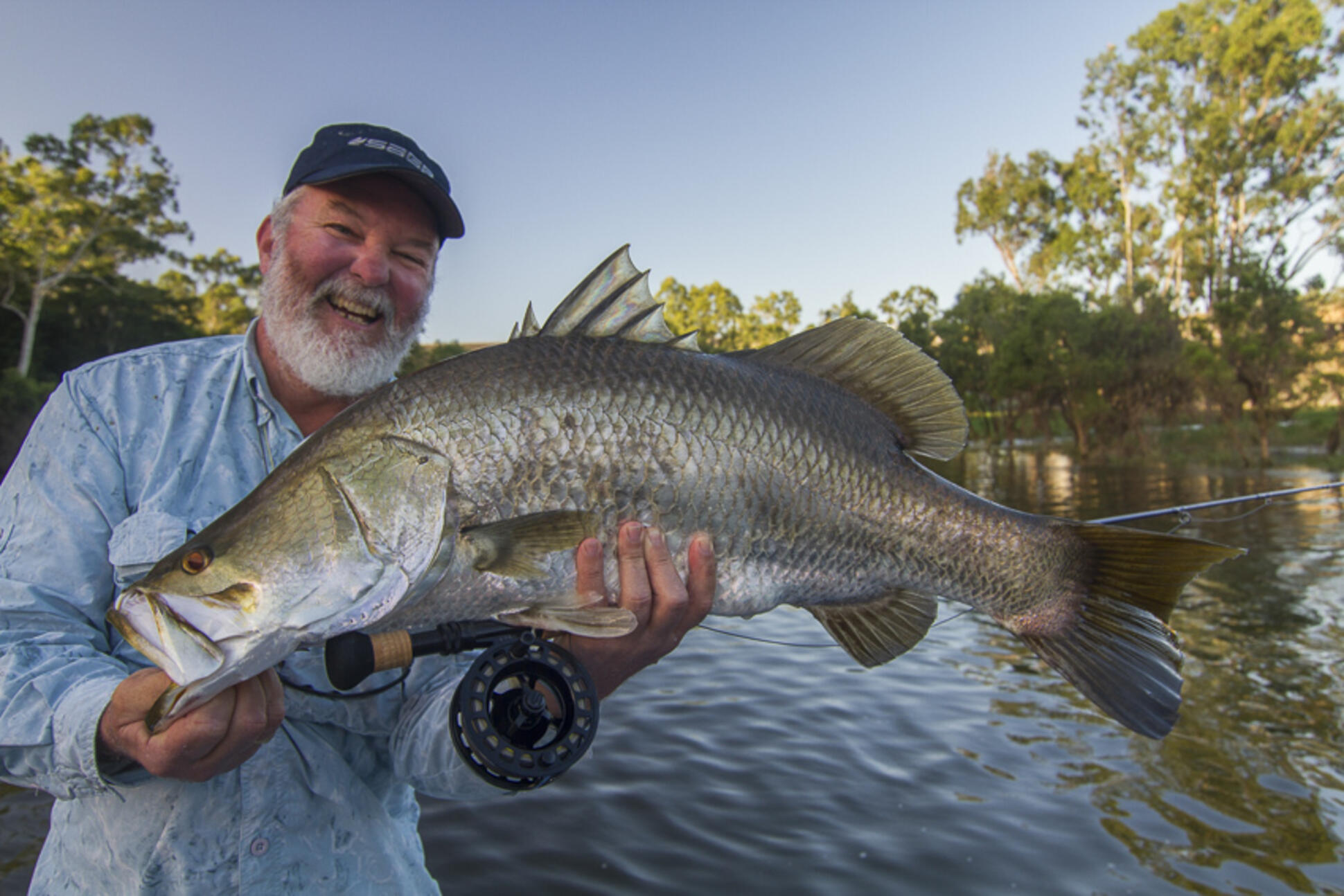 Lates Calcarifer, commonly known as barramundi, are one of the great sport fish of the world, and are a special target species for fly fishermen. They offer a wide range of challenges often requiring considerable fishing nouse and expertise to overcome. If I was to sit down and draw up a list of my own favorites they’re at number 1. This always begs the explanation of why.

Firstly, they live in a wide range of habitats in fresh and saltwater. You can find them in rivers miles inland from the sea and in billabongs that might be cut off from the rivers for several years, and where they grow big and fat. You find them through all the transitional stages of a river between fresh and saltwater but they are most prevalent in the tidal reaches around mangroves. In rivers with large tidal flows (up to 8 meters) many fish move in and out with the tide traveling many miles in a day drifting up and down the river with the flow. 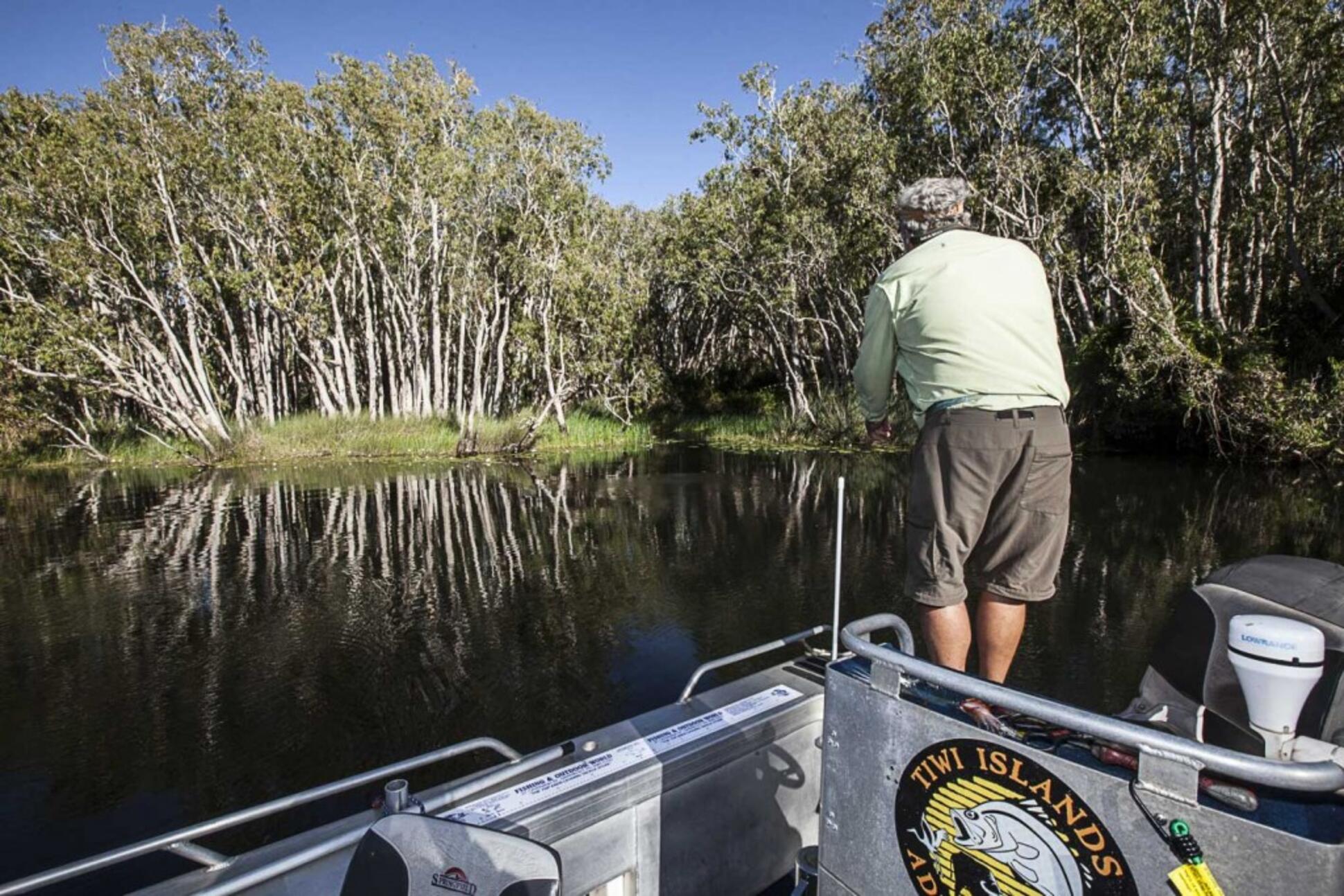 You also find them along mangrove edges, among fallen trees, and when the water’s clean you can sight fish to them along these edges as the tide moves in and out of the mangroves. They loiter under the shade of prominent single mangroves that are outermost in the tidal flow, they wait in ambush among mangrove saplings and in small indents in the muddy bottom, anywhere that might break the flow. You find them around rocky headlands and on sandy beaches and around close inshore reefs. You find them in all sorts of places.

Saltwater fish are lean and bright like burnished silver ware. They have bright yellow tails and for their length weight less than the freshwater fish. They have to work harder and are fitter. All barramundi are born males and at a certain size (usually around 70 centimeters, but this varies from region to region) they become female, so all the big fish are girls and these spawn in the saltwater around river mouths. The benchmark is a meter long fish, known in all places around Australia as a “metery”.

Barramundi are fundamentally a very lazy ambush feeder. They like current eddies where baitfish become trapped in the swirl, or where baitfish rest before making their next move, and the barra can sit under them and inhale them with a gill flaring implosive intake, much like a tarpon.

If they have one shortcoming it’s that barra are not regular surface feeders – who doesn’t enjoy a smashing surface strike. On the rare occasions when they’re “boofing” surface baits they’ll eat poppers, sliders, Dahlbergs and stick bait imitations, but don’t bet on it happening in a week of fishing. 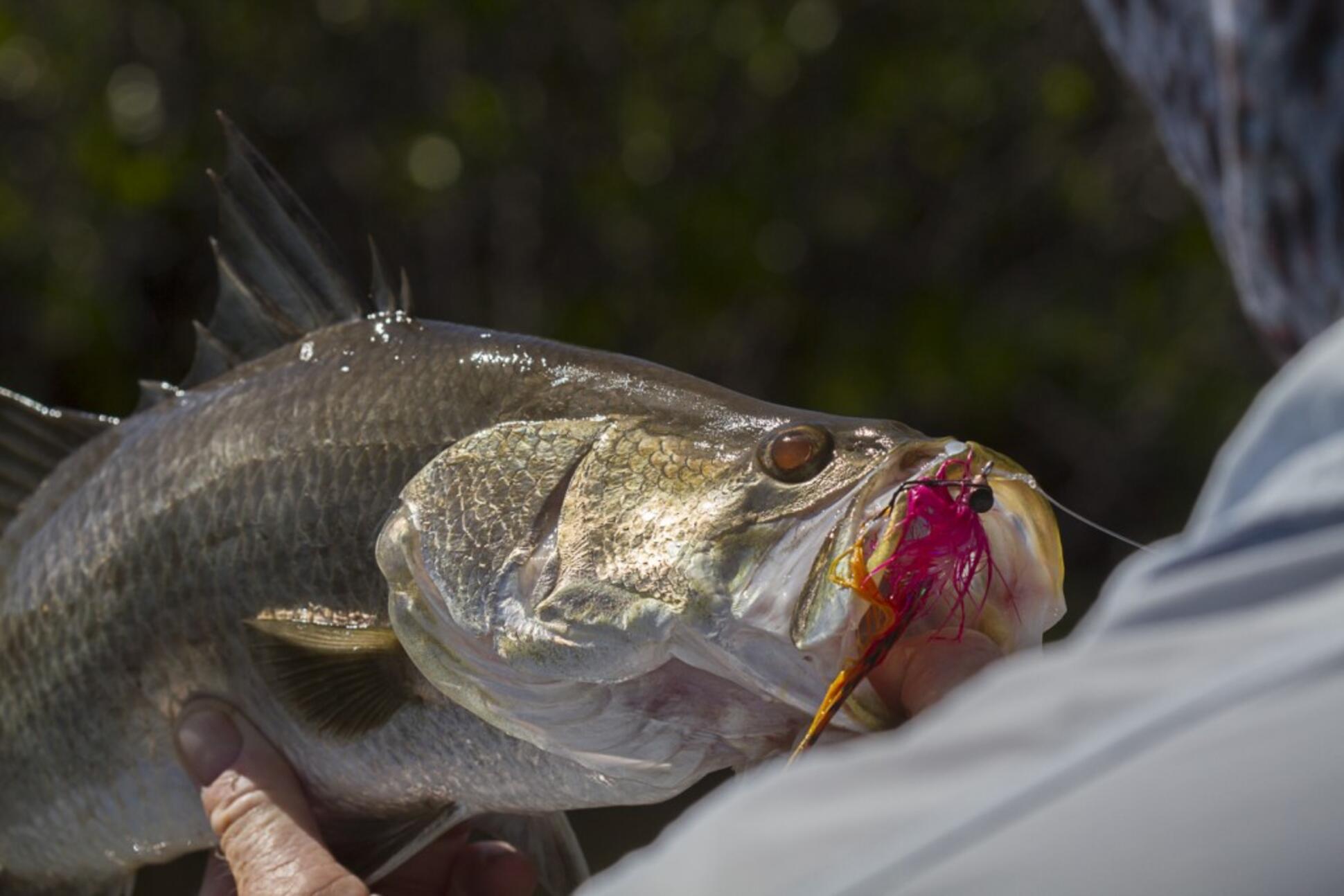 When they’re hanging under mangrove branches and in the slightly murky water of muddy flats and you can see them, a floating line is best, but the fly needs weight and you need to be accurate as you have to get the fly in their face. Sometimes in this situation, if they’re in a particularly aggressive mood they’ll eat a surface fly.

But most of the time we fish deeper, and a good barra fly fisherman relies on having a wide range of line densities from floaters toRIO Leviathan 26ft sink tips. My most used line on barra water is RIO’s tropical saltwater intermediate. At a pinch you can fish a surface fly on this line, and provided there isn’t too much current and you have sufficient “metal” in your fly, and a long leader, you can suspend a fly 15 ft deep on an intermediate.

Barras have very abrasive, hard mouths and wickedly sharp gill cutters. A bite tippet is essential; preferably a hard fluorocarbon in 40-50lbs. “Trout striking” will miss you plenty of fish, these require a solid strip strike then a lift of the rod to start the process of hauling them out of cover – it’s a hand to hand fight and lightweight reels are perfect, if you’re in the backing you’re in trouble. Blind casting to snags, cover, creek junctions and the mouths of ditches that drain the mangrove swamps is the standard approach. These are a casters fish. 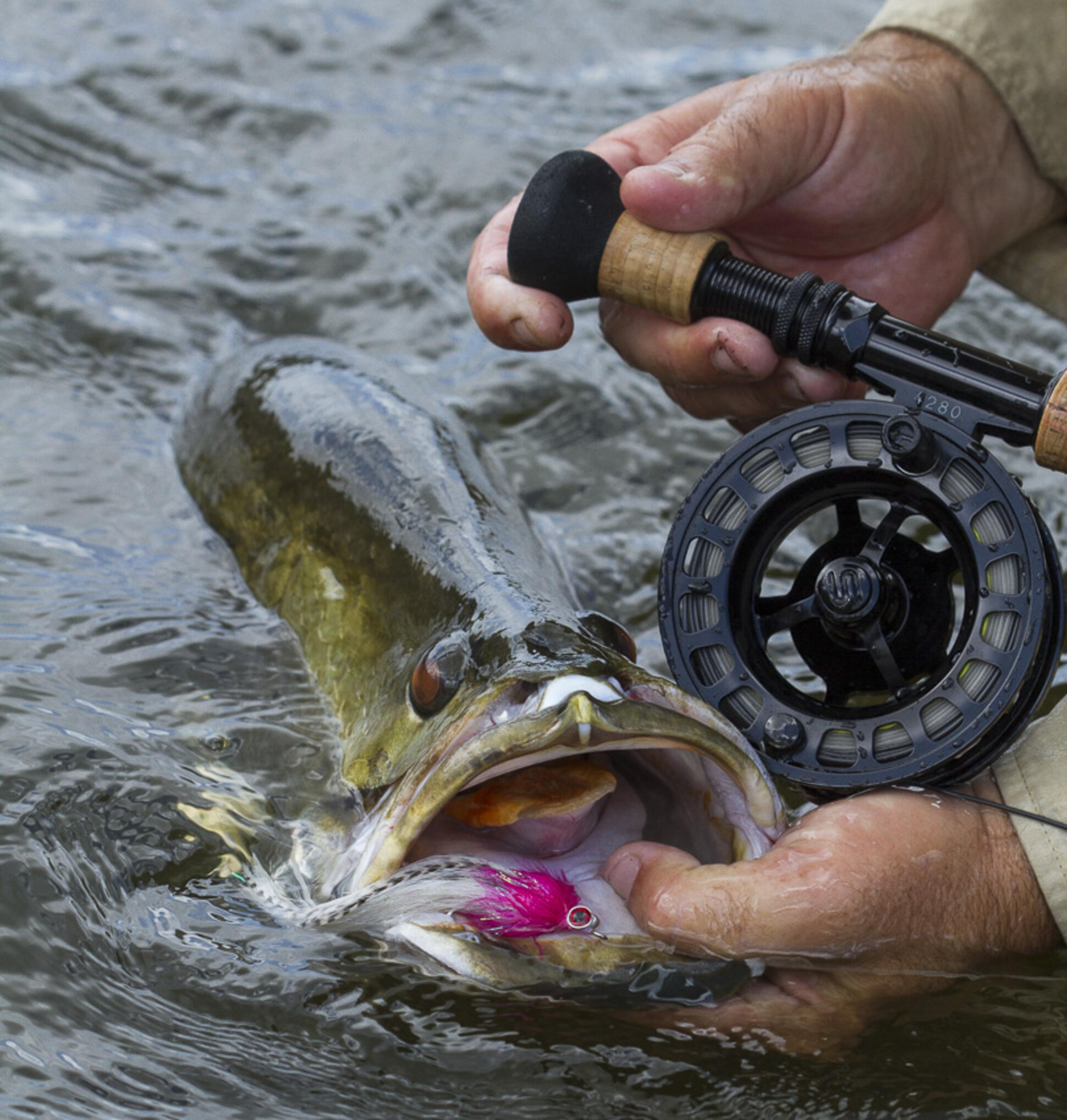 What I like so much about these fish is that they reward good casters and thinking fishermen. You need to know your fly’s sink rate, your line’s sink rate, how to throw mends to give you sink time in variable current seams, and how to work through the water column. They generally like flies with plenty of mobility and your retrieve needs to contribute to this. In clean water on the flats I use fine small tarpon style flies, in dirty water flies with bulk are an advantage. We should NEVER underestimate a barramundi’s ability to detect a fly even in heavily discolored water; they are remarkable.

If I had to single out just one thing I love most about these creatures it’s that they hit like a hammer blow, its sudden, hard and powerful – that is perhaps their greatest appeal, but then they follow it up with powerful surges and runs that can take them in any direction, but its often right back into where they came from. Then you add in their gill rattling leaps and just the sheer beauty of them, they’re a very complete package and I suspect they’ll remain my favorite fish for as long as I live 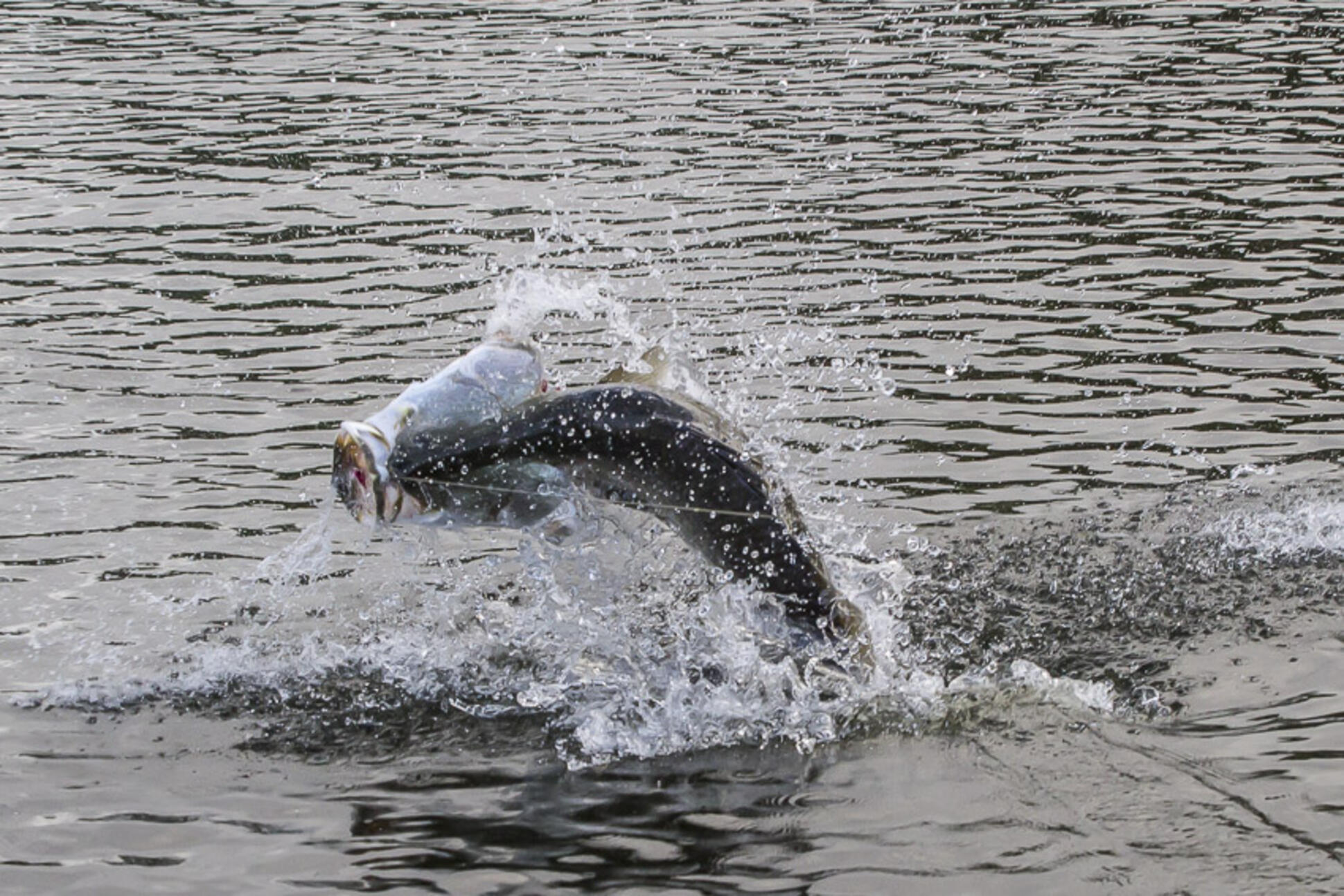 Billabong – a waterhole that is part of a river system during the wet season.

Boof – an onomatopoeic word describing the sound a barra makes when it feeds. It’s a sound created by a detonative implosion as they flare their gills to create a vacuum to inhale a baitfish, prawn, or your fly.

Snag – fallen trees lying in the water providing cover and breaking the flow.

8-10 weights. 9’s are excellent all rounders that are cast-able all day and powerful enough to manhandle most barras

Lines – all should be tropical

A full intermediate is first choice most of the time.
A full floater in specialized shallow water or topwater situations. RIO’s Permit line is a cracker for this.
An intermediate tip for shallow mangrove edge fishing.
A Leviathan 26ft sink tip for big flows in big water with big fish.
For much of the fishing flies should have weed guards so you can unhesitatingly throw them right into the cover.
Hard mono tippet material – I fish 20lb most of the time, with a fluoro bite tippet      40-50lbs. 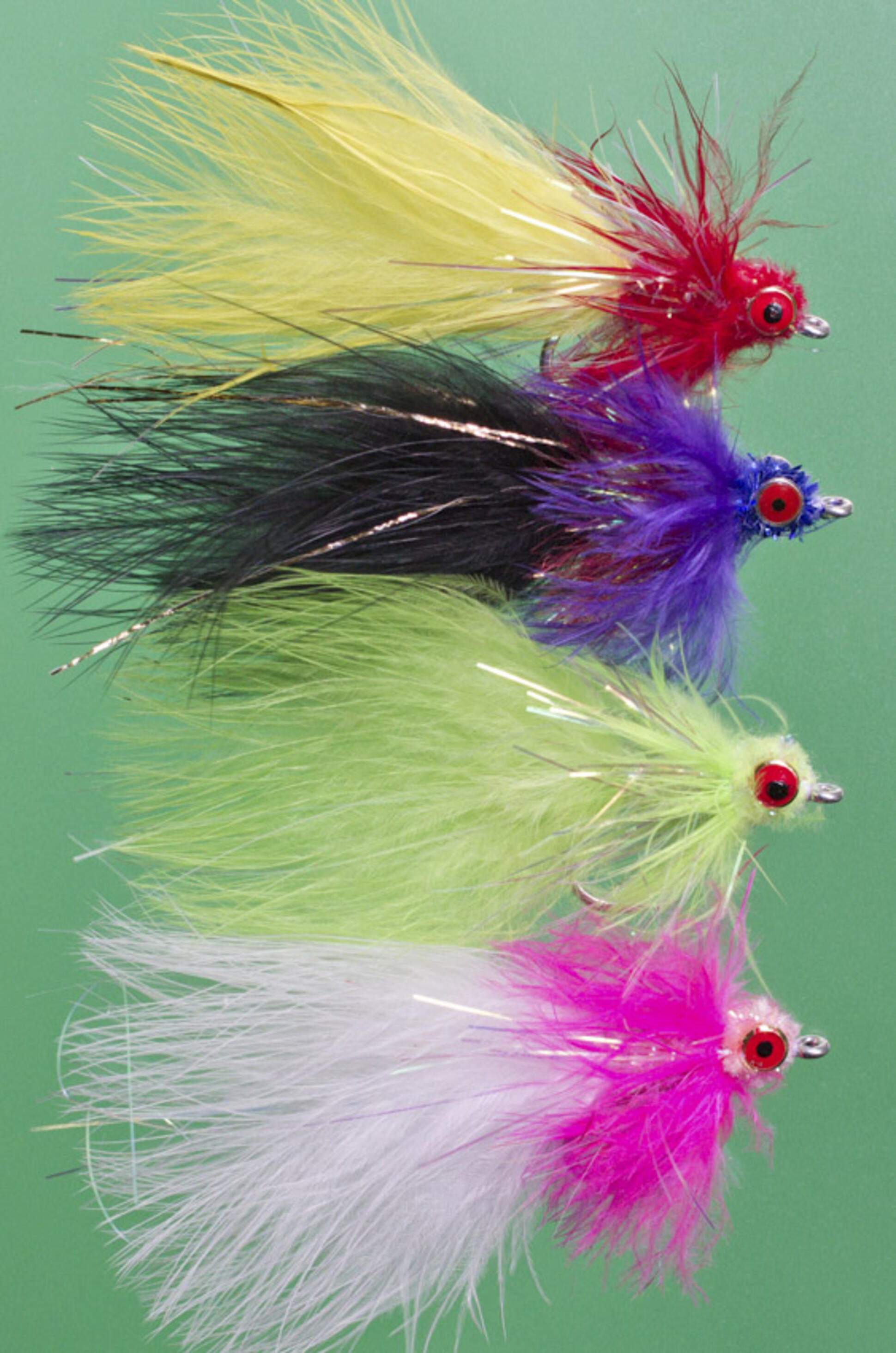