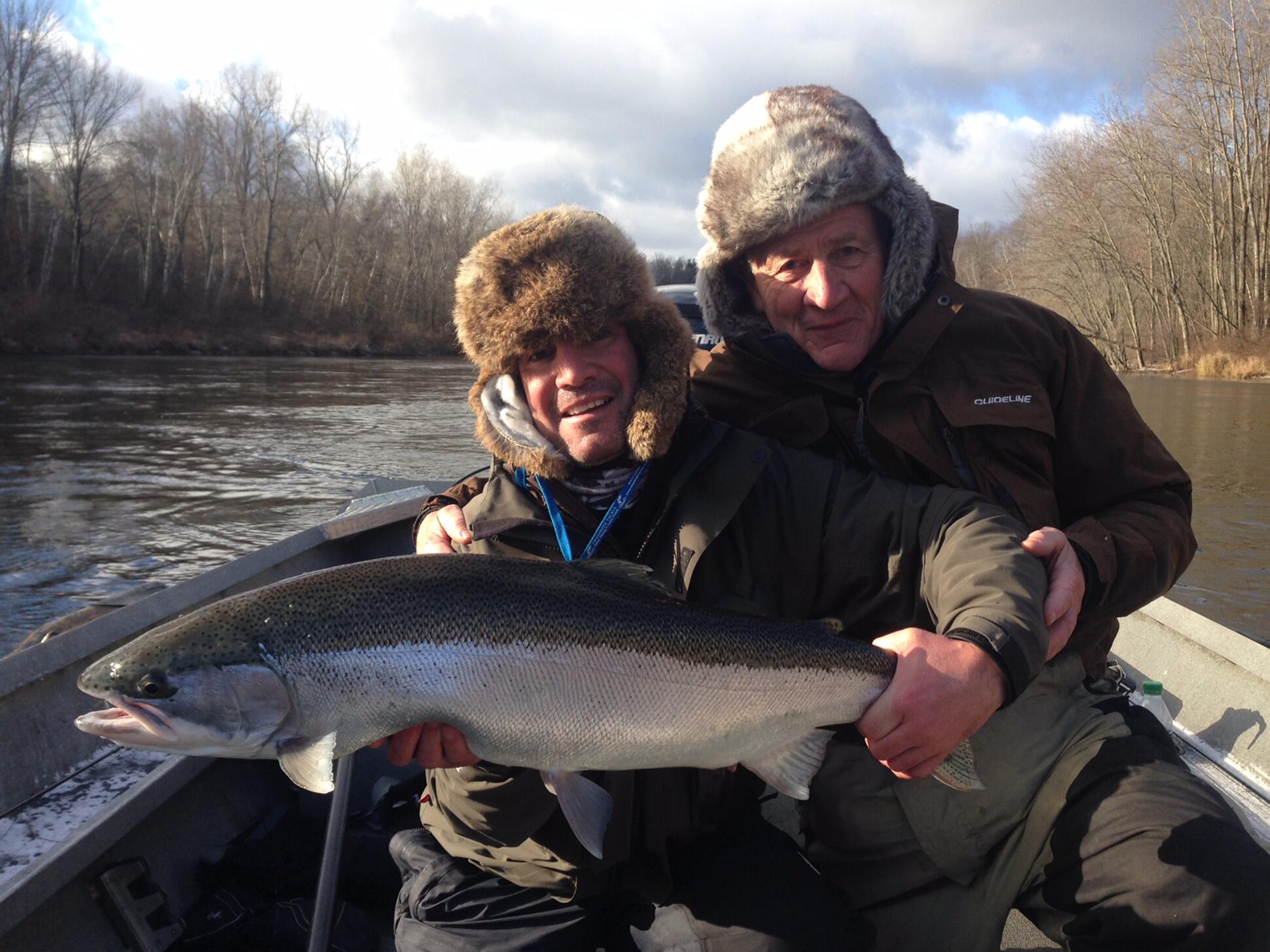 Fall is my favorite season to be in Michigan. The humid summer days melt away, like the vanishing snowpack in spring, it marks the changing of a season, from the summer swelter to cool crisp autumn. As the trees change their cloaks of green for the brown and red colors of the fall, Michigan spey guys are gearing up for the migrations of salmon and steelhead into the many tributaries of the Great Lakes.
The ultimate fly fishing experience is catching the fall run steelhead. They are a noble species, in my opinion greatly out classing our Chinook salmon. The autumn steelhead don’t spawn until the spring which is why they are so special and eager to snap at our swung flies. No one really knows why they come in the fall. It could be food source, water temps, moon phase - the list goes on.
On a typical year, we get our first run in late September, with great fishing up till the end of December depending on the weather and most importantly, the all-important water temperature. Prime time for the hottest action would be late October through the end of November. As the winter chill tightens its grip, the run of fresh fish slows down, but new ones continue to trickle up the rivers to join the hold over steelhead.
Michigan Steelhead are a winter run strain of fish. Water temperature is our biggest consideration when targeting them with a swung fly. Earlier in the season we may have fifty five degree water and the fish can hold in faster flows, perhaps in the heads of the pools, often sitting behind the spawning salmon. As the season progresses and temps fall, we look for slower, soft water with 4-6 foot of depth. The colder the water, the slower the better. As we move into late season and true winter steelheading we may have 34 degree water. During these conditions steelhead find the softest seems and slowest currents so they can expend little or no energy. No matter what the season, identifying structure such as rocks and boulders, drop offs and submerged logs – these all create seems and soft spots that will be the preferred hang out for steelhead at any time of the season..
We typically fish a two or three inch fly that has good movement and seductive action such as temple dogs, rabbit strip leeches and sculpins tied with marabou tails. Adding large quantities of Flashabo as pioneered by steelheading guru Kevin Feenstra is a good recipe for aggressive strikes. Flash combinations like blue with silver, purple with pink and copper are all good choices and the addition of Flashabo adds significant action as it swoons and flutters across the stream. If conditions are low with clear water we will often have better luck by downsizing our flies, not dissimilar to fishing on the West coast rivers.

We like to get the fly down to the fish by casting a fast sunk line. Winter run steelhead are not as aggressive, so make it easy for them to grab your fly by getting it down to the fish and keeping it down there during the swing. Back in the old days I’d employ full sunk lines such as 200, 300, 400 and even 500 grain, full sinkers. These line systems, over head cast on double handers proved deadly. But, they didn’t spey cast well and only worked with room for a traditional back cast or fishing from the boat. With the development of the RIO SVT system of scandi bodies available in a float, and a full intermediate body, combined with fast sinking tips, we have the most versatile line system and one that will get the fly down deep and keep it down during the swing. The SVT is very easy to cast and will handle big flies and T type tips with no problems.
I always pay extra attention the hang down when swinging in the Great Lakes. We get a lot of grabs in the warmer months as the fly straightens but this is even more so as the water cools. A good rule is to count to ten after the line straightens before stripping in to re cast. 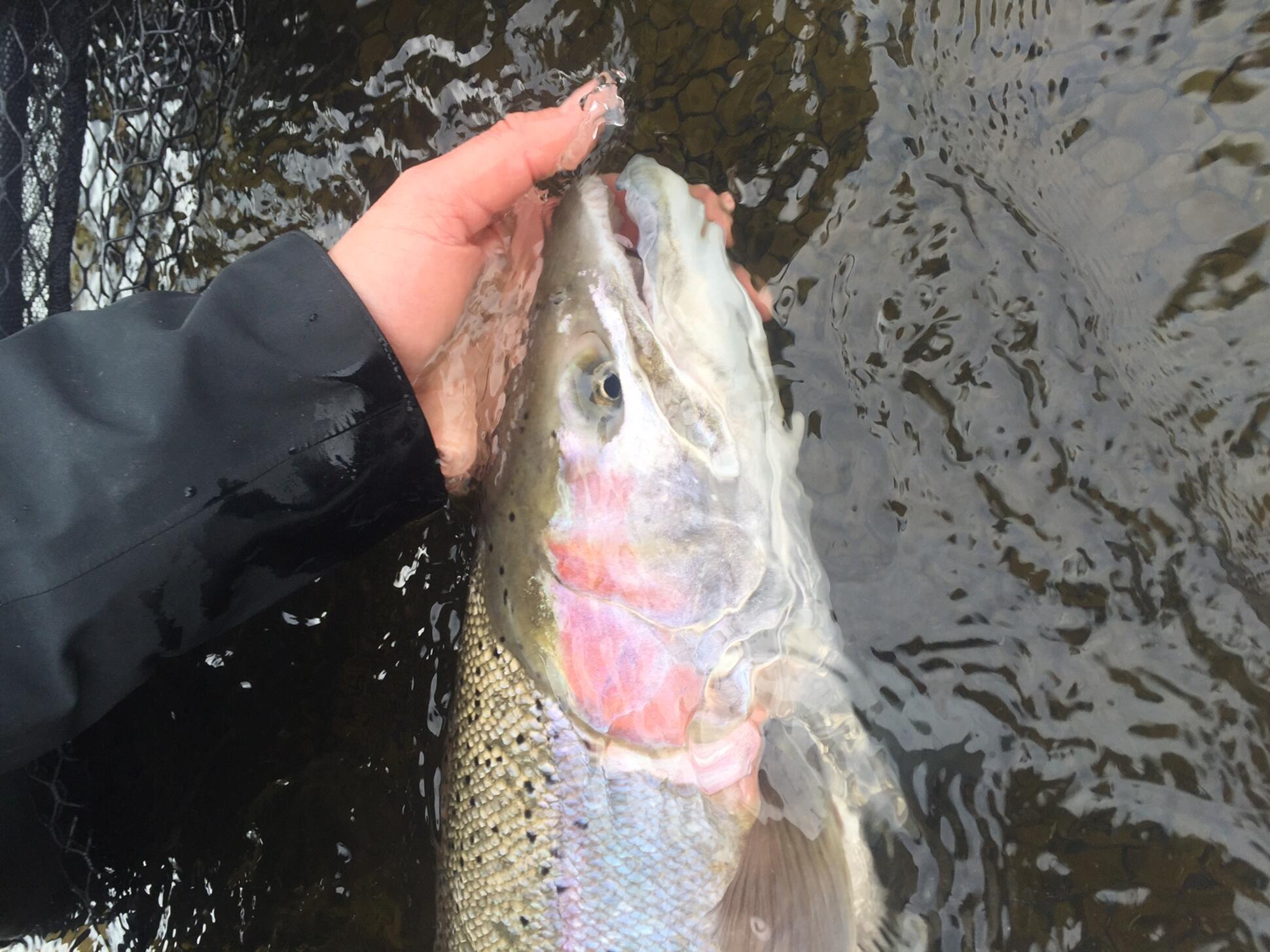 A sound piece of advice to Michigan steeheaders is to get well kitted out with good quality clothing. The advancements in modern, high tech gear such as base layers and thermal fleece products, being comfortable in the boat or wading will make the difference between a fun day on or misery. Invest in good winter gear. When I’m in the boat I always prefer to wear heavy insulated bibs and boots – much better than waders to stay cozy and warm. I also use an old fashioned hand warmer - the antiquated style that runs off lighter fluid with a heating element that glows when you blow on it. It’s a brilliant piece of kit. I stuff it in a pocket underneath my over coat and it warms the whole body.
Steelheading in the Great Lakes tribs can be challenging, but the rewards for the effort are well worth while. It’s the most beautiful time of year to be on the water. Most days you will share the river with the company of bald eagles soaring above, white tailed deer staring at you from the woods and geese migrating south overhead. If you have the chance to experience the fall chase for a great lakes steelhead, I highly suggest you give it a go – you’ll not be disappointed.

Smaller streams we love switch rods. 11 foot 7 weights with short Skagit heads are prefect. For the bigger rivers such as the Muskegon, Grand and Manistee we utilize the longer two handers. The new SAGE X in 7140 or 8140 is a wonderful choice especially if you plan to wade fish. I am a big fan of the RIO SVT system, but the RIO Skagit I flight, combined with lengths of T 14 or MOW tips is also an excellent line choice for great lakes steelhead.
Pete Humphreys, Muskegon River, Michigan.
×