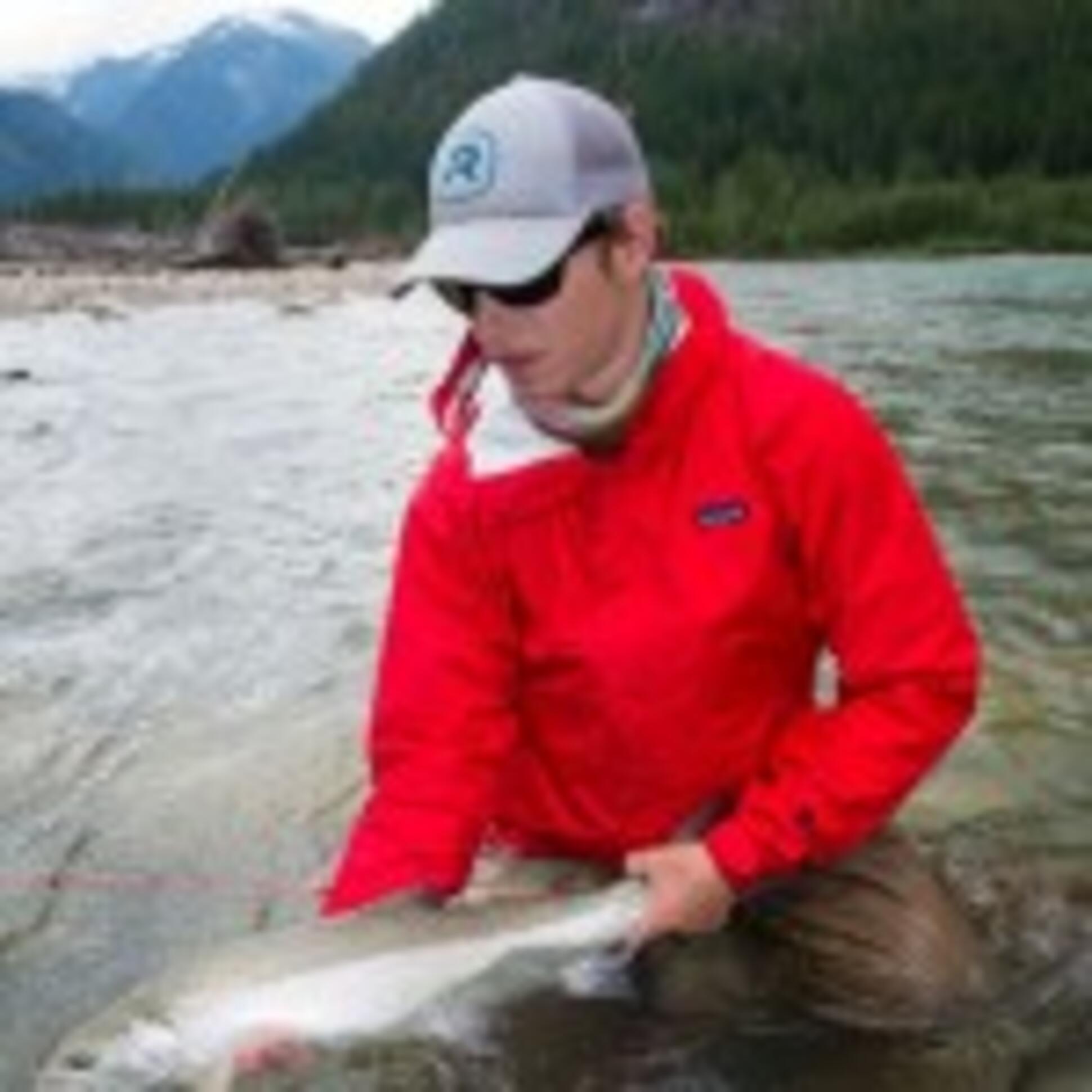 A few short weeks ago I ended up on the Dean River through an unfortunate stroke of fate. An injury to the another RIO employee (that contrary to popular belief around the office was not inflicted purposely!) came less than 24 hours before they were slated to head out. I was told if I could make it to Seattle by the next morning to rendezvous with the rest of the group I was going to the Dean. I made it to Seattle. I’m pretty sure I’m the only person on earth who’s felt bad about going on this trip. Our Sales Director told me, “Aaron, nobody ever sat on their deathbed and wished they’d spent fewer days on the Dean River.”

I struggled with whether or not to post a report to the masses. Currently the Dean is as crowded as it’s ever been. After a few banner years of fishing, campers are all over the river. Angling ethics seem to be less and less important, as was evident by stories of illegal guiding and people fishing in closed sections. To compound the frustration, the commercial salmon fishery off the coast exploded in size this year, severely affecting the size of the run. The Dean needs all the help and support it can get right now! This article talks about the aforementioned issues. Check in with the Steelhead Society of B.C. for the latest news or to write a note to an official on the subject.

The Dean River is the quintessential steelhead river. Made famous by its remoteness as well as some of the grabbiest wild fish in existence. Glaciers are still carving away at the canyon depositing boulders throughout the river. You couldn’t create more prefect steelhead runs. It’s what Cham is to a skier; Yosemite to a climber; the Colorado to a boater; you get the idea.

With no connecting flights available in such short notice out of the metropolis of Idaho Falls, I packed my bags in preparation to drive to SLC, at 0230, in order to catch a plane. Packing was no easy feat, I had only known for a few hours at this point where I was headed, and was bristling with nervous energy. The Dean had been atop my bucket list for as long as I can remember, and giving me a few hours to prep could not have elevated my cortisol levels further!

After arriving in Seattle and linking up with the rest of the group we made the short drive to Vancouver, then hopped a plane to Bella Coola, BC. If you’ve watched a ski movie in the last decade, you’ve seen the incredible geography surrounding this place.

At this point a nervous angst crept in, one of the coolest parts about a Dean River trip is the heli ride in. If there’s any activity that puts you face to face with the environmental issues humans are currently struggling with, Steelhead fishing has to top the list. With word of unsustainable bycatch and a lack of precipitation this summer fresh in our minds, we flew through a mountain pass in the BC Coastal range with a front row view to the quickly receding glaciers that feed the area’s rivers. With so many predicaments affecting them, Steelhead are a marvel of resiliency.

After a much too brief flight we banked into the Dean River canyon and quickly landed at the Lower Dean River Lodge. We were quickly met by our gracious host Billy Blewett, shown our rooms, and hastily made our way to the boats to make the most of the afternoons fishing.

The guides were excited as a summer thunderstorm rolled through the canyon bringing the first real precipitation and cloud cover they had seen in close to two months. I cinched up my rain jacket as we blasted up river, the summer rain and low lingering clouds made for a surreal atmosphere. This was Steelhead Nirvana! There’s something magical about swinging a fly and playing a fish in a downpour.

One of the marvels of this trip is the skill of the guides in running their jets. Constantly while running up river we’d approach a rapid and I would think to myself, end of the line, only to watch the guides nonchalantly dissect the class III+ piece of water. These were by far the best boatman I’d ever seen. Coming back down these rapids often resembled a game of Frogger. We’d roll up on step to a rapid, the guide would flip a quick U-turn in the tail out, and work the boat back and forth through the safest line. Truly incredible skill

Part of the excitement of this trip was getting to put RIO’s brand new spey lineup to the test. Matched up with new offerings from Sage and Redington, we were pretty blown away by the ease and quality of the new lines.

The new Skagit Max and Max Short heads offer aggressive turnover for heavy tips and big flies. They also handled the Dean’s afternoon winds without issue.
The new RIO Scandi was an absolute pleasure to fish ‘grease lined’. With low water conditions a floating line was perfect for a variety of situations. Combined with a RIO Steelhead/Salmon Leader or a 10’ Intermediate VersiLeader it was a pleasure to cast and fish. It had the power to turn over a big foam waker while landing nicely with a size #7 Hilton.

Both of these lines are built with ConnectCore technology. They offer great feel to grabs and their power transfer is incredible. You feel the cast load throughout and these lines cut through the wind with ease.

I’ve always been a fan of that leader material that’s been around forever, but am now %100 sold on RIO Steelhead/Salmon Tippet. After watching one group member land a 15lb buck on 12lb RIO Steelhead/Salmon Tippet, with wind knots throughout, I was impressed. I didn’t break off a single fish the whole trip.
One of the coolest new RIO products is GripShooter shooting line. A coated handling section transitioning into mono gives anglers the best of both worlds for handling and distance applications.

The Lower Dean River Lodge itself is a cozy array of tent cabins for the guests with a beautiful hand built main lodge for dining and R&R. They have some young enthusiastic guides who work incredibly hard to show you what the Dean is all about. Several years ago their original camp was taken out during the last week of the season by the flood of the century. A season’s worth of rain fell on the plateau above the river in a matter of hours, bringing the river up massively in a short period of time. There’s something about this river that makes both the fish and the people incredibly resilient. 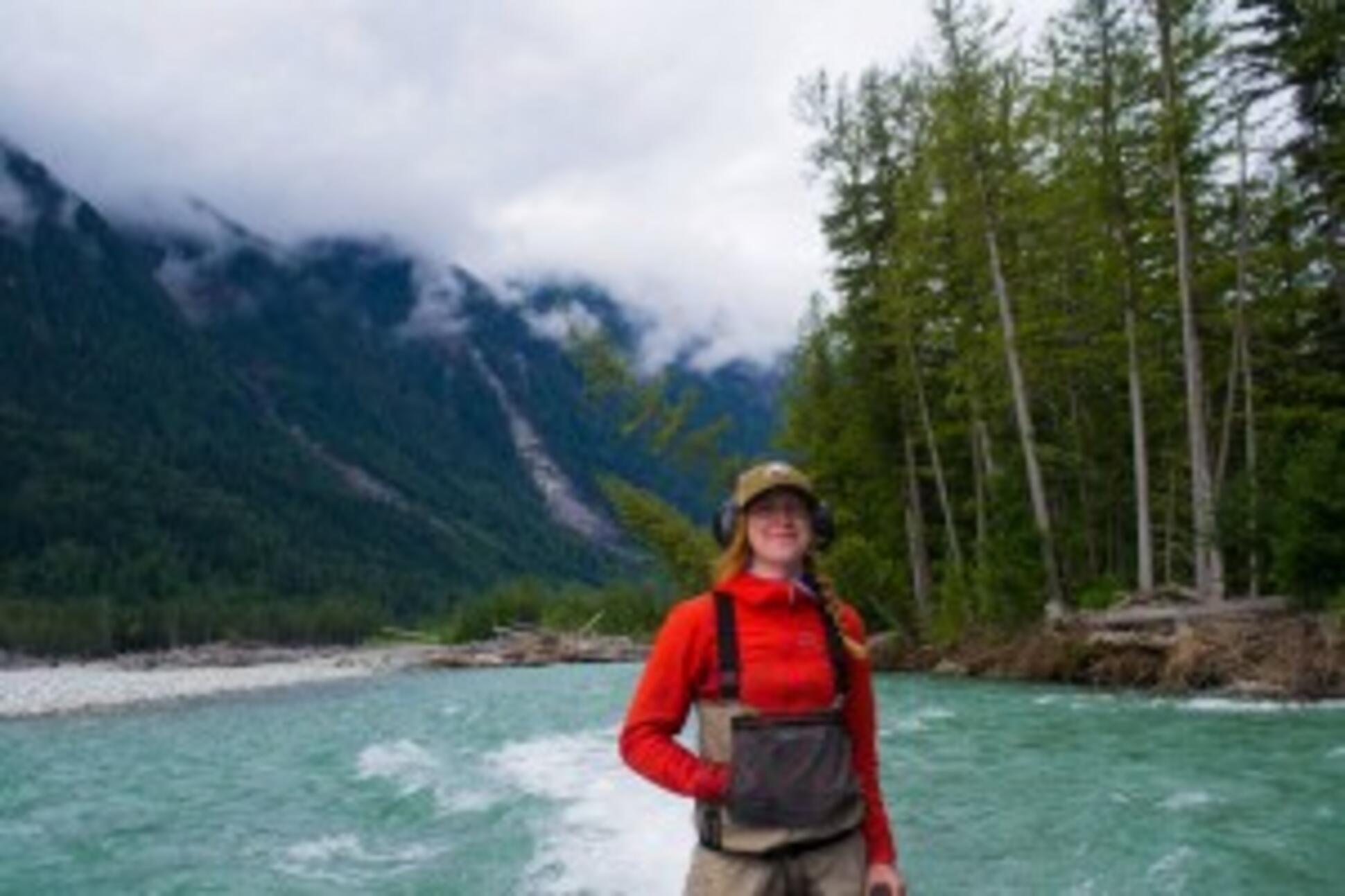 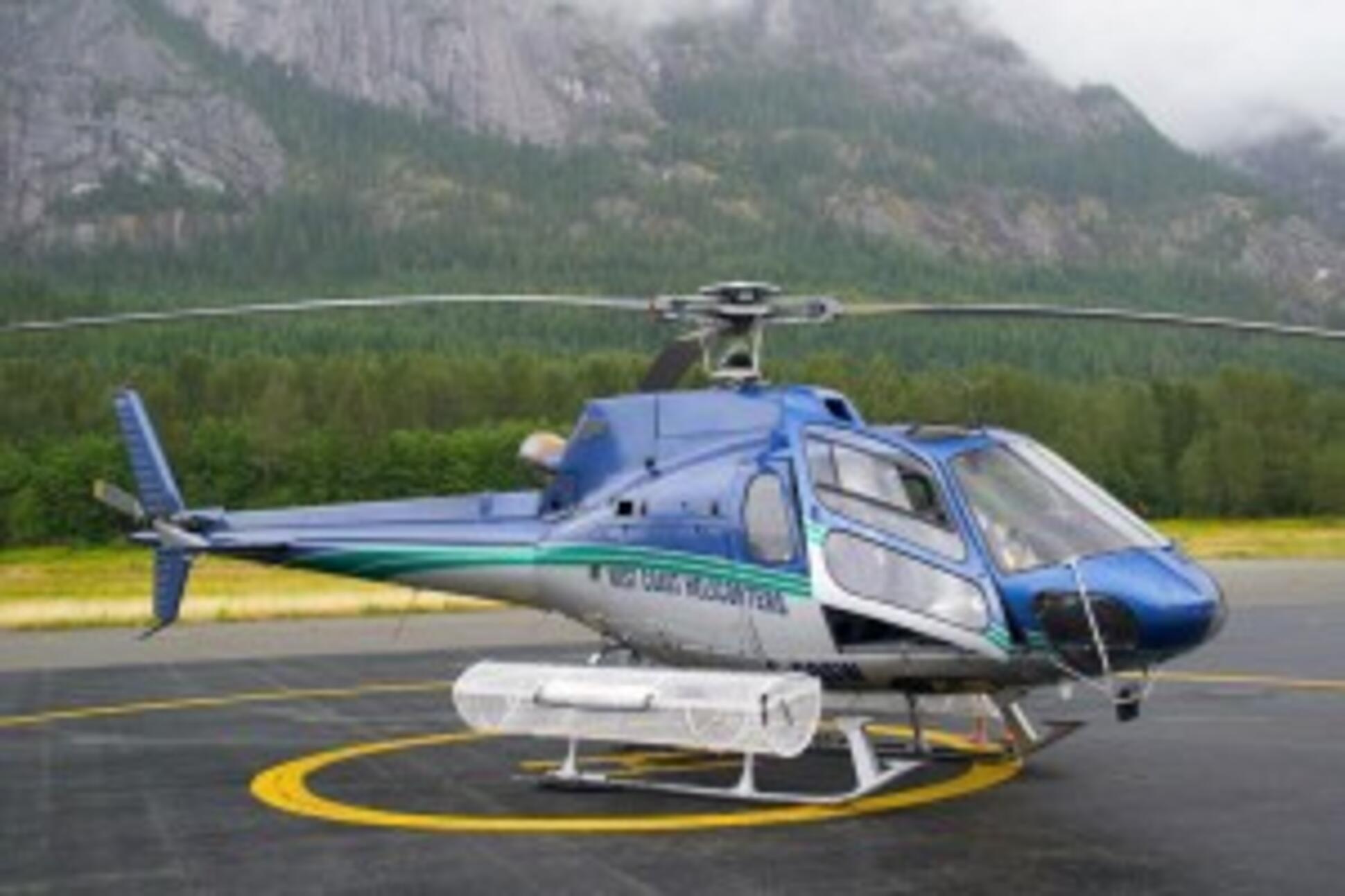 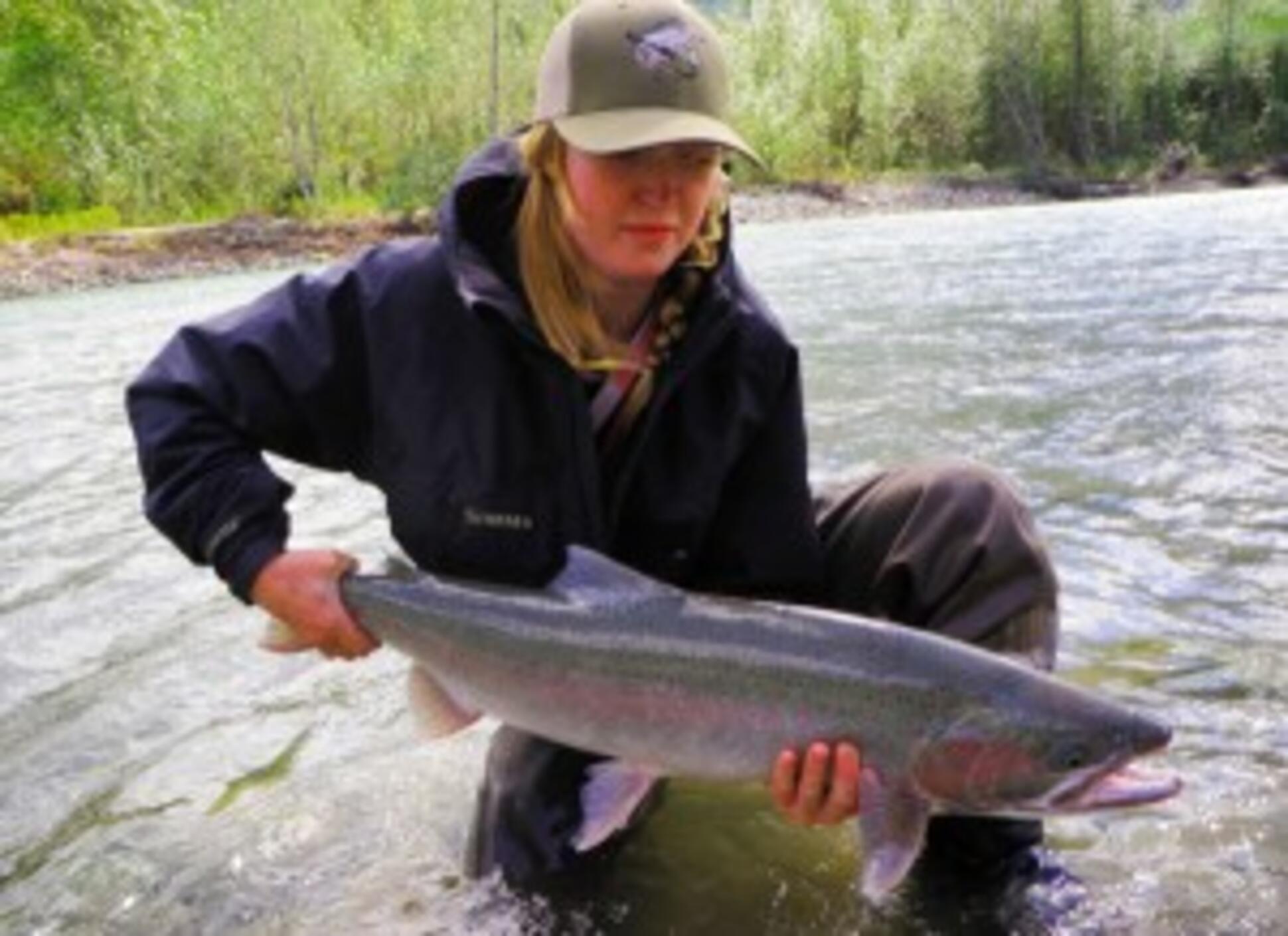