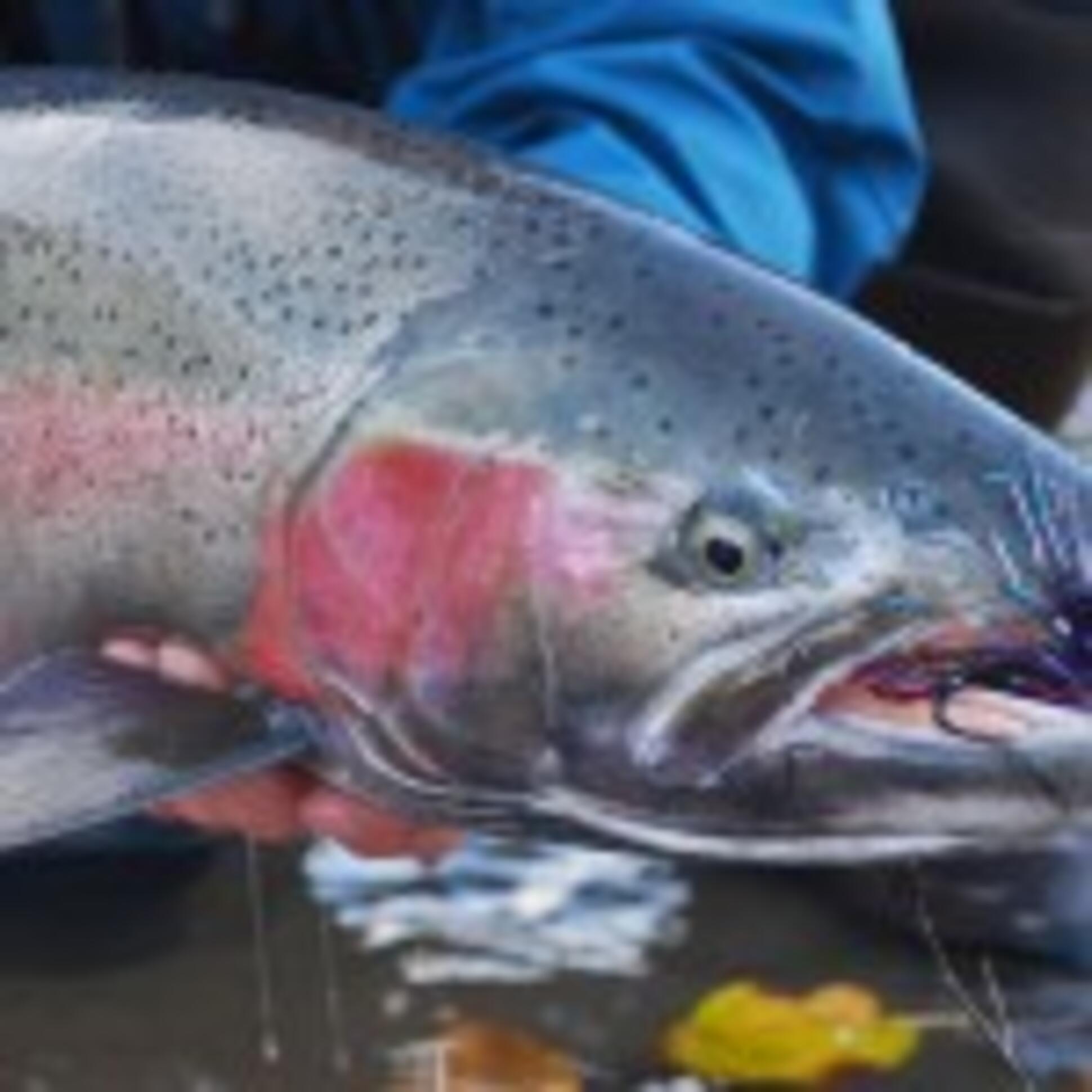 A 20lb steelhead is a special fish and the benchmark for a giant. A 30lb fish is the stuff of legends but three tributaries of the Skeena system in British Columbia can boost the opportunity to tie into one of these monsters; the Kispiox, the Babine and “the jewel of the Skeena” the Sustut.

I took a trip to the famous Suskeena lodge, the upper of two camps that service this remote river. A “white knuckler” from Smithers airport in a 10 seater plane, we glided in over fall cottonwoods and majestic evergreens to touch down on a gravel airstrip in the middle of nowhere. We had arrived in the Sustut valley, surrounded by snow capped mountains, 100 miles from civilization. We were met by a gaggle of young guides with scruffy beards, rosy cheeks and smiling faces. They were welcoming, friendly fellows and whisked us away in the camp van to the 6 cabin complex at the hallowed Suskeena lodge, tucked away on the banks of the Sustut river.

The Sustut is the most remote and least known tributary of the massive Skeena water shed. Sustut steelhead travel a mind blowing 270 miles to reach their spawning grounds, climbing 5,000 feet from the sea. Famous for its big fish in breath taking scenery, only 18 privileged rods for an 8 week season fish the 21 miles of river from the junction of Bear creek to the mouth of the Skeena. The upper 60 miles of river below Johanson and Sustut lakes are closed to fishing. Tragically, every season an estimated 1/3 of the wild Skeena steelhead are a bi catch to the commercial gill netters, fishing for Sockeye salmon in the mouth of the Skeena. When will the Canadian government “wise up” and stop this madness?

My pal “Bonzer” and I were room mates for the week. Our cabin was heated with a wood burning “pot belly”, nicely equipped with comfy beds, drinking water and a bathroom. We unloaded our kit, shaked out rain coats and waders in excited preparation, interrupted by a loud “clang, clang, clang” – the dinner bell echoing through camp. “Let’s eat Bonzer”, I hurried him to the main lodge, I was starving. Surrounded by photos of famous anglers posing with enormous steelhead, we sat to huge plates of fresh salad, homemade lasagna and plenty of claret. My companions in camp were all charming folk and the conversation crackled with some good laughs.

The lodge divides the river in 3 sections, upper, middle and lower; each day we rotate through the beats. We drew straws and my team got the upper, from the mouth of Bear creek down; rumored to be the hottest beat and a good chance of a fish. After eggs and bacon, we layered up, as there had been overnight frost and a chill in the air. Our guide Paul barked “get your life jackets on boys” as he fired up the 20 foot jet sled. Paul’s boat was equipped with an especially potent engine to negotiate the class 3 rapids that lay ahead on our 10 mile run upstream. I am familiar with jet boating but never anything like this. The engine roared to life like a swarm of pissed off hornets in a tin can. We sped upstream, tears rolling down my cheeks, dodging rocks the size of Volkswagens and crashing through white water at an awesome pace. This was not for the feint hearted. A long ride that got progressively more terrifying the closer we got to Bear creek. I was wishing I had packed a spare pair of under garments when finally Paul eased off the throttle and we glided into shore. He killed the engine and heaved the anchor. Paul is an expert jet boat pilot and has been running that stretch of river for nearly 20 years. I never felt I was in danger, but what a wild ride. I loved every minute of it.

The mouth of Bear Creek is a seductive steelhead run – a natural resting pool with the confluence creating a deep run close to our bank with softer current than the main flow. I was first in and started high, working my way down the pool. Bonz came in behind me and hooked a big fish on his second cast. He wisely made a very short cast to start his drift and picked up a fish that I had missed – a lesson for us all. Bonz fought the fish skillfully as it battled hard and deep, his rod bucking, the fish shaking its head. “It’s fighting like a big male, down and dirty”. It came to the rubber net soon enough and there lay 19lbs of wild Sustut buck. These fish are beautiful. I stared at it lovingly. It had an enormous tail with two big stripes of burgundy red down its flanks, steely grey back and an eye the size of coat button. What a fish. Bonzer was thrilled and deservedly so. Pictures taken and hands shaken, a great start to our week.

I landed one more fish that day, a hen around 15lbs that was equally as beautiful and a “cookie cutter” of the first. We had a few grabs and lost one or two that weren’t hooked for long. More buttock clenching on the ride back to the lodge including one particularly tricky rapid, aptly named “the graveyard”. Too dangerous to go through at speed, Paul skillfully backed the boat down the flow maneuvering around the rocks. We arrived back at camp to find our stove had been lit – a warming welcome after the chilling ride home. After hot showers and over steaming, heaped plates of roast turkey dinner we got the reports from the other boats with tales of triumph and disappointment.

We rotated beats each day and the lower and middle stretches introduced me to some classic steelhead pools. The river widens and softens the closer it gets to the confluence with the Skeena; riffling, deep cuts at the heads and freestone channels turning to never ending rocky beaches and shallow tail outs. Every cast I felt confident I could be covering a resting fish. Such pools as “Look Out”, “Boulder”, “Fishtrap” and “319”, named after three 19lb steehead were landed there in one day. The home pool for the lower camp at Valhalla lodge is aptly named “Surprise”. It lived up to its reputation and gave up some good fish during the week. I hooked a fish I would’ve given my right arm to have seen. It stayed on the bottom, head shaking and felt very heavy, only to come off – surely a big male. Bonzer also had a very large buck hooked in Surprise pool and almost to the net but it too came unpinned. He got a great look at the fish. I asked Bonz “how big buddy”? He smiled and sighed “definitely over twenty”. I could tell he was disappointed.

Our second run up to the upper stretch was again productive and we landed some great fish, but the magic 20lber had not come. We stopped for lunch above the confluence of bear creek where an old cabin sits. “See how the door is all shredded up” said Paul. “A big grizzly tore that place apart last season”. Encounters with bears are common place on B.C rivers, but after seeing the state of the cabin I kept my whit’s about me. On the final day as we sped up river a “griz” came swimming across in front of the boat in very fast current. He saw us coming and kicked it up a gear and powered through heavy rapids to hit the opposite bank, leaping effortlessly up 6 feet and on to shore. He stopped for a second to scowl back at us as he shook himself like a dog, spraying water into the bushes. He lollopped away and was gone.

In the afternoon Paul dropped me on a long tail out in the upper stretch. “We call this big buck boulevard for good reason” said Paul. “You can fish it down as far as you want” he shouted over the noise of the engine as they putted up stream dropping Bonzer off on the opposite bank. The river was cold – around 35 degrees and the water colored from overnight rain. I started with a very short cast, learning from my earlier mistake, I worked my Scandi Versi tip out to a comfortable distance, opting for the intermediate belly for a slower presentation, the sink tip dragging the large temple dog to depth. My fly was stopped with a hard grab followed by powerful head shakes. This felt like a heavy fish, fighting like a big male. He was well behaved and didn’t leave the pool, preferring to sulk deep and stubborn, tugging away and putting an almighty bend in my rod. Paul, back on my bank, was wading below me, net at the ready. I saw a huge tail surface, waiving at me – a sure sign a fish is tiring. Nervous moments but all went to plan. “That will go twenty” said Paul, as he cradled the mighty fish, taking measurements. I wasn’t so sure but I knew it was a big fish and if not a 20 it was bloody close. We took some hero photos. I could hardly get my hand around the root of his tail he was so thick. We watched him swim safely away as Paul grabbed a laminated chart from the boat, “22 pounds” he shouted. “39 by 20”. I was elated, thrilled and totally fulfilled. I didn’t care if I caught another fish all week.

A highlight was a day on the Skeena river. Our guide, Domenic, a cheery fellow and skilled steelheader, ran his sled past the mouth of the Sustut bringing it to rest at the Junction pool. “Welcome to the most beautiful place in the world” Domenic said. I agreed with him and looked up stream at the mouth of the Sustut as she joins the Skeena with a back ground of snow capped peaks. I felt privileged and blessed to be there. Domenic was superb company and great fun to fish with. This turned out to be our best day as between two of us we landed 8 steelhead and lost 4. One fish approached the 20lb mark and I had one boil on my waking dry fly, but no hook up – exciting sport at its best.

The week flew by and soon enough we heard the distant drone of the plane coming into land at the gravel strip. Gear loaded, we said our goodbyes, as the plane climbed up and away we followed the Sustut river and I could see Bear Creek and the pool where Bonzer had landed his 19lb buck; or was it a 20? We never weighed it and it was as fat as butter. If had been the guide, I think I would have given him the benefit of the doubt. 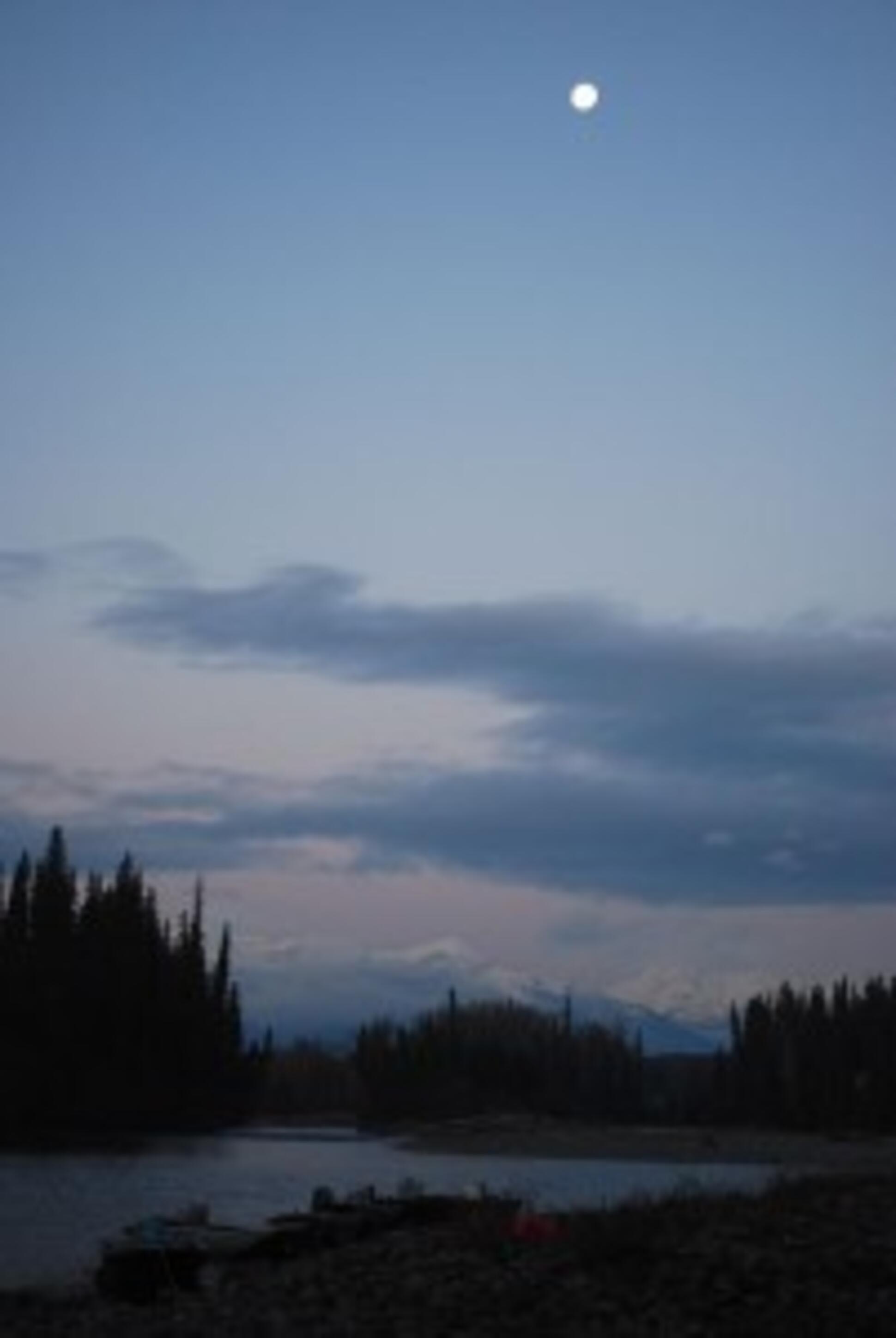 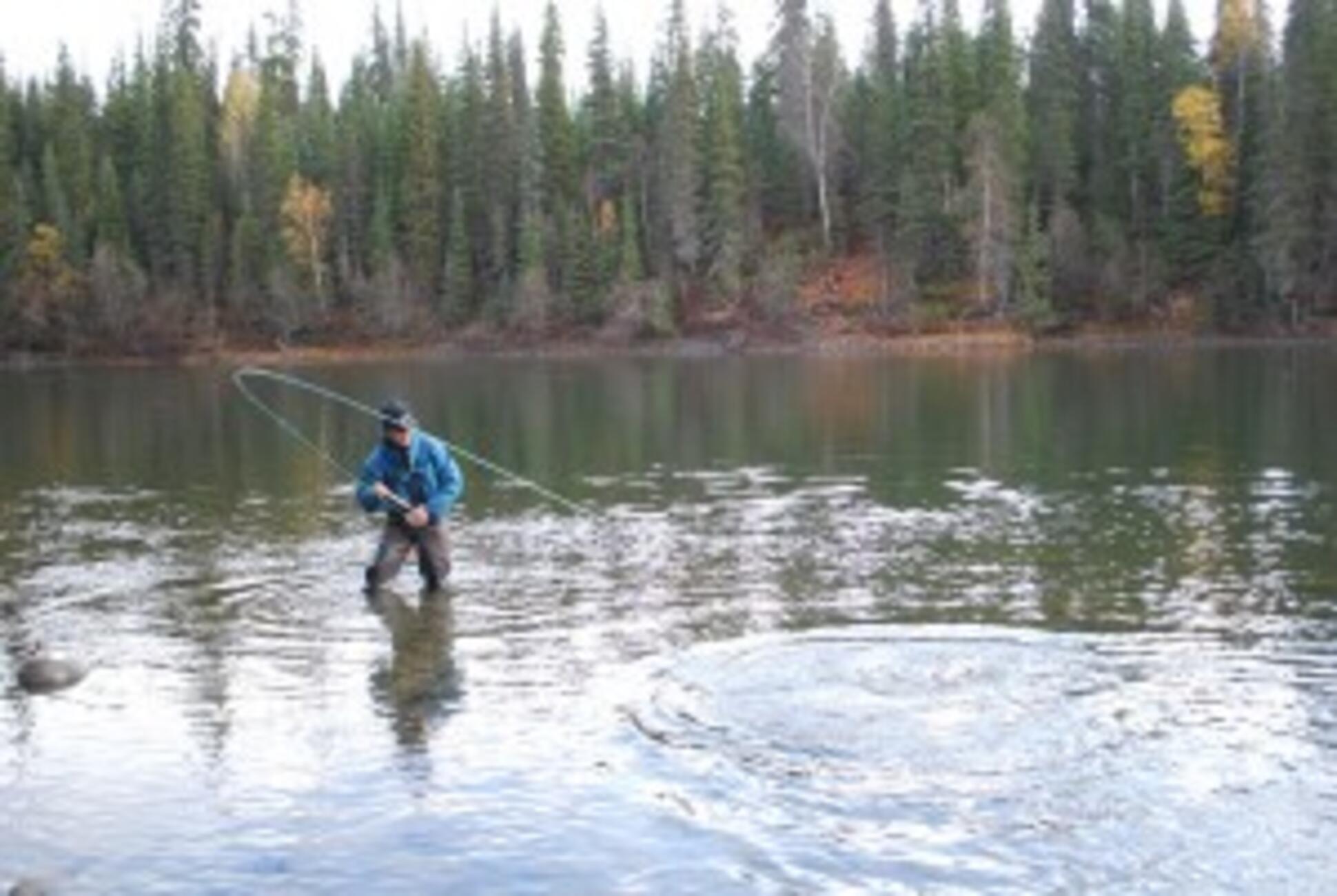 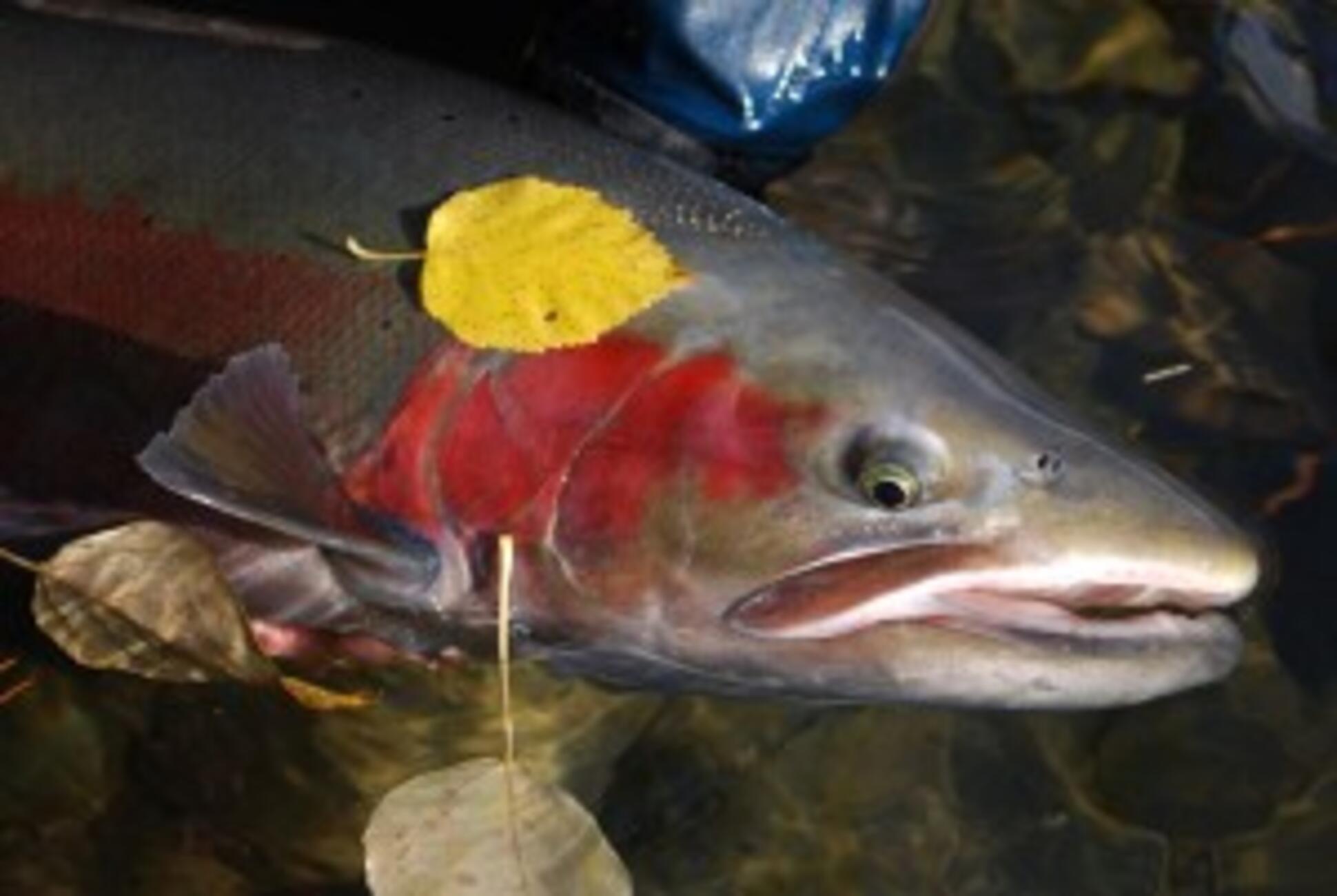 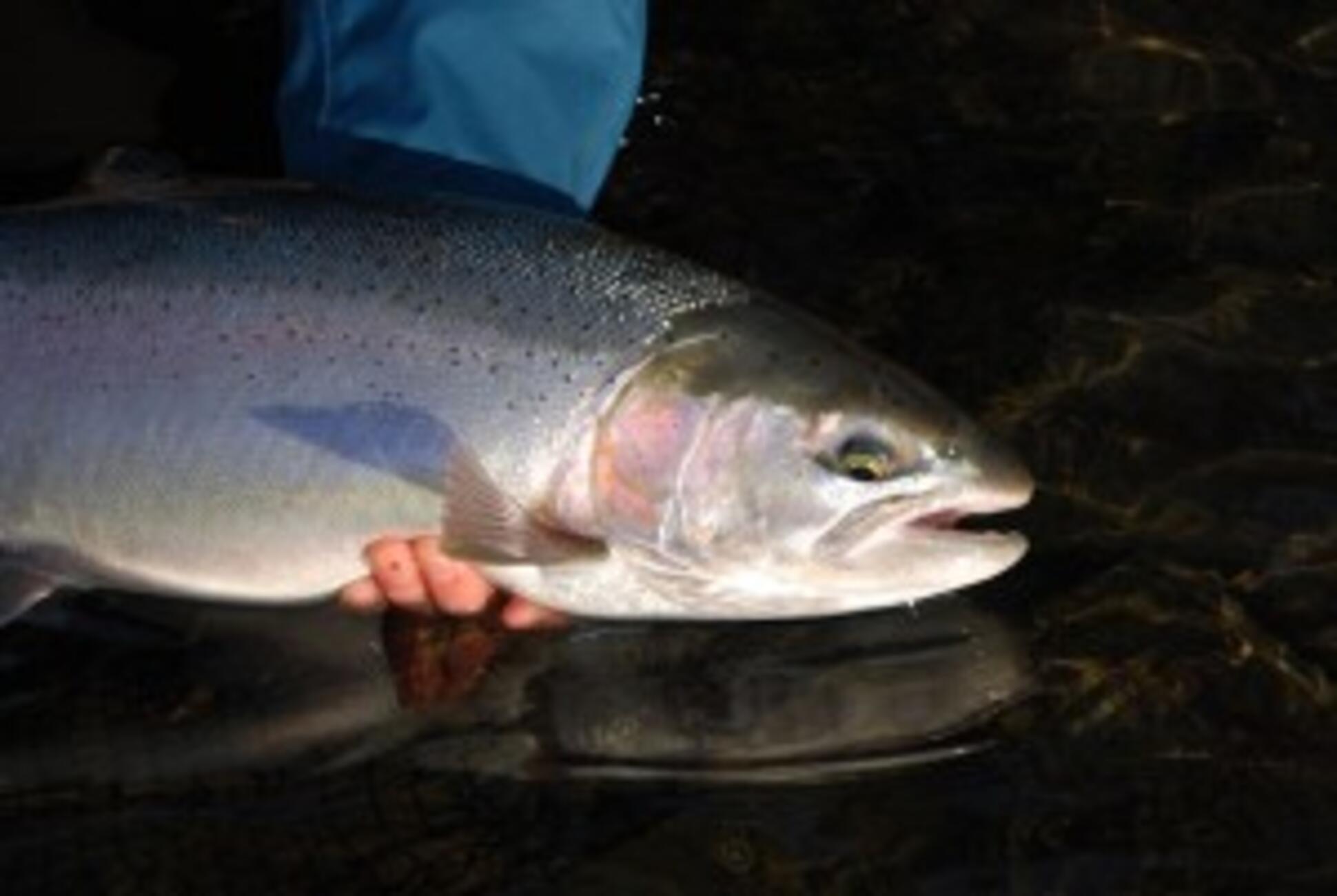 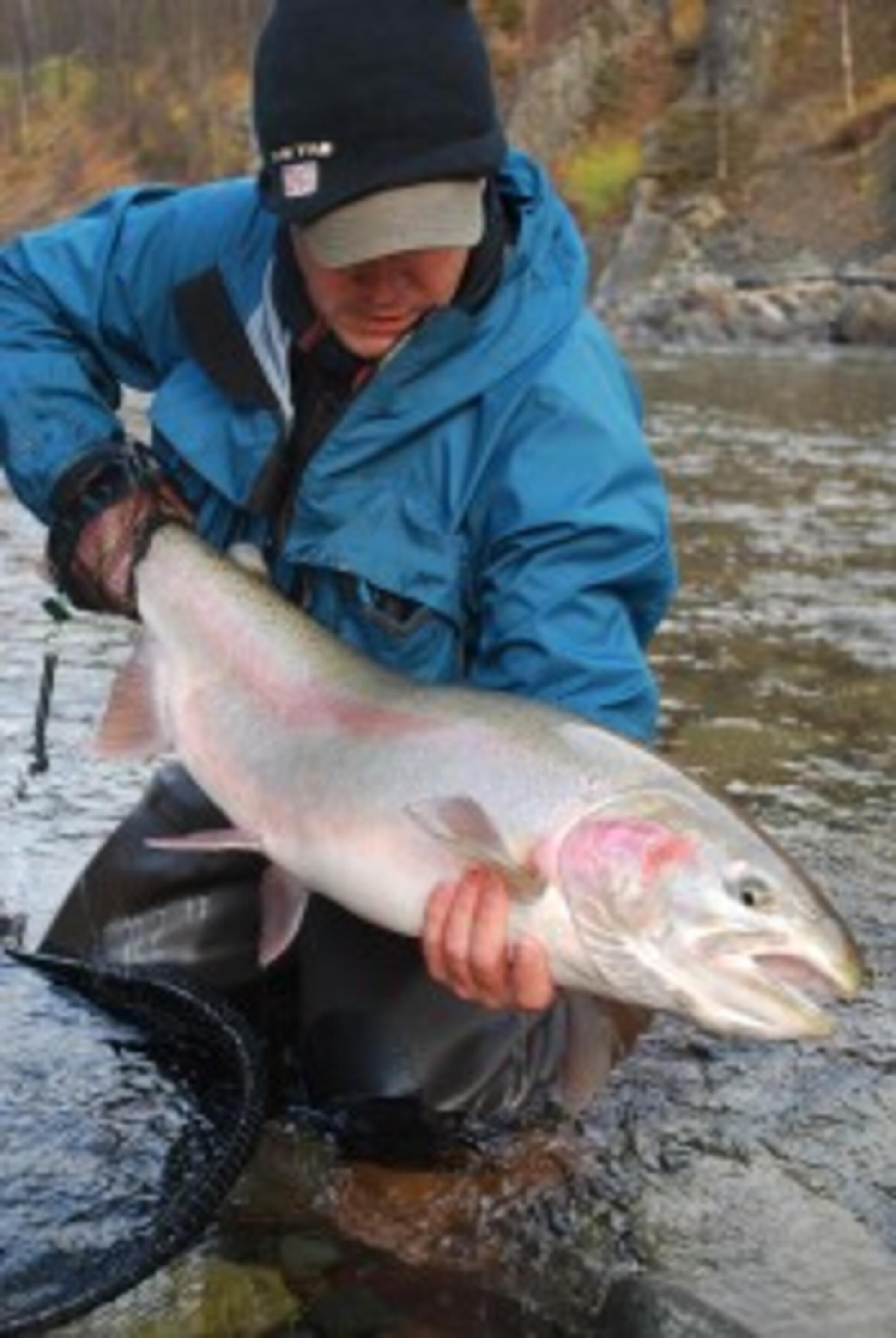