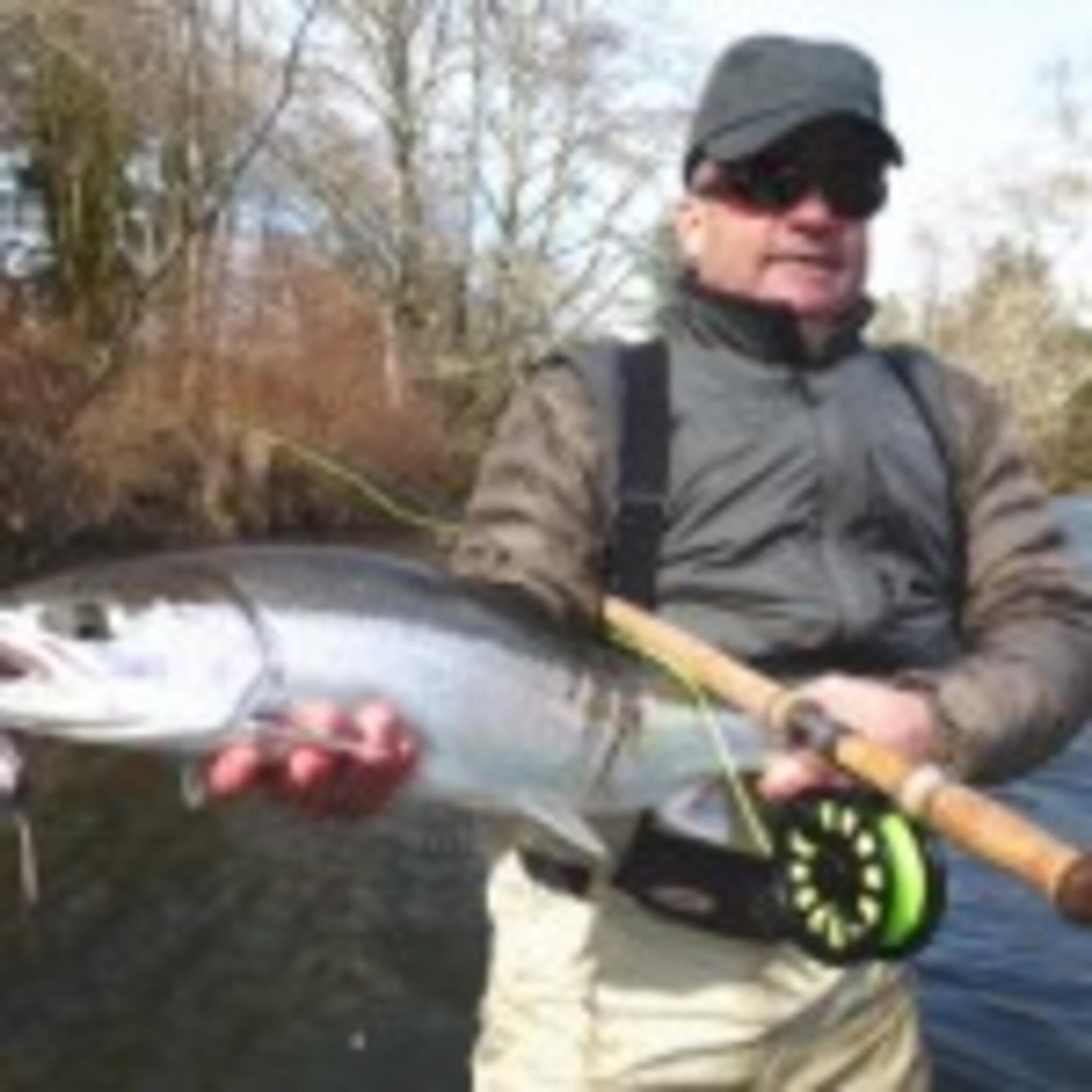 Eat, bite, chew, nibble, pluck, pull, yank, take, tug, grab, ripped, slammed, hammered – whatever you want to call it, when you’re swinging a fly for steelhead you’re lucky to get a couple of them in a full day of fishing. That’s not very many chances. If while I’m guiding we get two or three grabs in a day and fail to convert one to even a hook-up, the day usually winds down with comments like – “Nice day.” – “Beautiful river” – “Great lunch.” – “Thanks for the instruction.” (but now I’ll try something totally different that actually catches fish) – “Is the river always this crowded?” – or my favorite, “That’s why they call it fishing, not catching.” (that one actually causes muscle spasms on the left side of my face).

On the other hand, if those same grabs are converted into a couple of trophy pictures, taken at just the right angle to make the fish look twenty pounds bigger, and maybe the memory of a third fish lost during an epic battle, then the day ends with calls to my booking agent before they even get out of their waders. They make it rain money on me and would force their daughters to marry me just for the asking. As you can imagine, this is an area in which I’ve studied with great diligence.

How to set the hook is by far the most important part of this equation. I believe that for most of the fish that are lost, regardless of when they are lost, the fault lies with what happened (or didn’t happen) during the hooking process. Unfortunately there’s no step by step process that I know of, that works all the time for the limitless combinations of current speed and type, to where in the swing the fish grabbed, to the tenacity of the pull, to other factors known and unknown.

Then there’s the survival instinct. The one that causes your arms to fly up when someone takes a swing at you or when a snowball hit’s the windshield…and…when… something pulls on your fly (often the latter also causes a verbal reflex). This reflex action should be curbed at all cost. You can get lucky doing it, but it’s a very low percentage. It’s absolutely crucial that the conscious mind takes complete control of the body during this most critical and dangerous moment.

I’ve seen grabs cause grown men to freeze up in a state of shock, pulls that cause the knees to buckle resulting in a frantic thrashing about in the water. A good tug can often cause several moments of complete memory loss, like an alcohol induced blackout. More often though the opposite occurs. A good yank will send you into a different dimension where time is slowed way down. It’s the only possible explanation for the regularity in which someone explains to me a sequence of events that occurred between the initial pull and the hookset, one that would have taken several minutes, when in fact the time that elapsed from first tug to rod flying over the head like a spring loaded bear trap was around a nanosecond. For this reason it’s good to have a technique that works more or less automatically.

First, fish with an elevated rod tip. Fish take things into their mouths using suction. If there’s a sufficient enough sag in the fly line between your rod tip and the water it will allow the fly to drift freely to the back of the fish’s mouth when it sucks it in. From there it can easily find the corner of the mouth on it’s way back out, the ultimate point of purchase. If you fish with your rod pointing straight down the line or with the rod tip in or too near the water it can and will prevent this from happening. Again, you can hook and land fish no matter what you do – it’s a matter of percentages. An exercise I often do with my customers is I’ll take the rod directly upstream from the angler and have him or her pull on the fly line at the water’s surface. Once while I hold the rod tip eighteen inches to two feet off the water and once with the rod tip on the water. The result is very telling. On the first pull the angler will feel very little or no resistance for several inches and on the second pull there will be significant resistance from the start. How high to hold the rod tip off the water is determined by the speed of the current. The faster the flow the higher the rod tip needs to be lifted in order to get that slight sag in the line.

Second, suppress the survival instinct; allow the fish to take the rod down with the slightest of pulls. You don’t want to hold the rod firmly in one place. You don’t want to drop the rod or push it forward either, just allow it to happen. If your rod tip travels upward when the fish lets go, well, that’s a bad sign.

Third, you want to hold the line to the cork with just one or two fingers, use the pad of the finger tips, not the crook at the first joint. The line should go straight to the reel without any loop or loose line. I use my index finger and I don’t hold it too tightly because that would limit my sense of feel on the line and could cause cramping in fifty percent of my typing fingers. Instead, tighten up at the first sensation of a grab and when it pulls hard enough for the hook to set or you think there’s a danger of the line breaking, let go of the line, slowly raise the rod and play your fish. If the fish pulls slower, wait until the line comes tight and with your finger holding the line firmly to the cork hit the fish as hard as you can, then let go of the line and play your fish.

Make sure that when you lift the rod to set the hook, the rod’s butt section doesn’t get any higher than forty five degrees. If the rod rises much higher than that during the hookset, it may not deliver sufficient enough power at the fly to sink the hook in. If the fish doesn’t seem to be pulling hard enough to do either of these things and let’s go while you’re waiting, well, that’s when I get to say, “You should’ve set the hook!” But I’ll say that in jest, because I know that if you had, chances are you would’ve come up empty. What direction to set the hook in should be determined by where in the swing did the fish take and by varying currents. The old rule ‘downstream and towards your bank’ doesn’t always apply. You simply cannot influence the direction of the fly with your rod. It will always chase the line. So, set the hook opposite the direction of the line that is closest to the fly. That’s the direction the fly will go anyway and by staying inline with it you’ll apply more power and quicker than if you go in any other direction. So, if the fish takes early in the swing then ‘downstream and towards your bank’ should work just fine, but if the fish is straight down river, then a hook set that goes straight up in the air makes much more sense.

One final note, now that you’ll be landing more fish. If you’re practicing catch and release, please learn to land your fish in at least knee deep water and with nothing but your bare hands. When the camera is ready, gently lift the fish for the photo. The easiest way to do this is to gently hold the wrist (base of the tail) with one hand, place the other hand under the belly and slide it forward to the pectoral fins. Don’t put too much of a squeeze on the fish as it will likely cause it to wriggle and thrash about. Don’t try and fight a wiggling fish by squeezing harder, no bear hugs. If the fish resists when you try to lift it, just allow it to fall back into the water, it’s still hooked, everything will be fine. Be patient until the fish cooperates. If you’re not taking pictures there’s no need to touch the fish at all. With the leader in one hand grab the hook at the bend and turn it out. Steelhead landed in this way, and in a reasonable amount of time, rarely need to be revived. 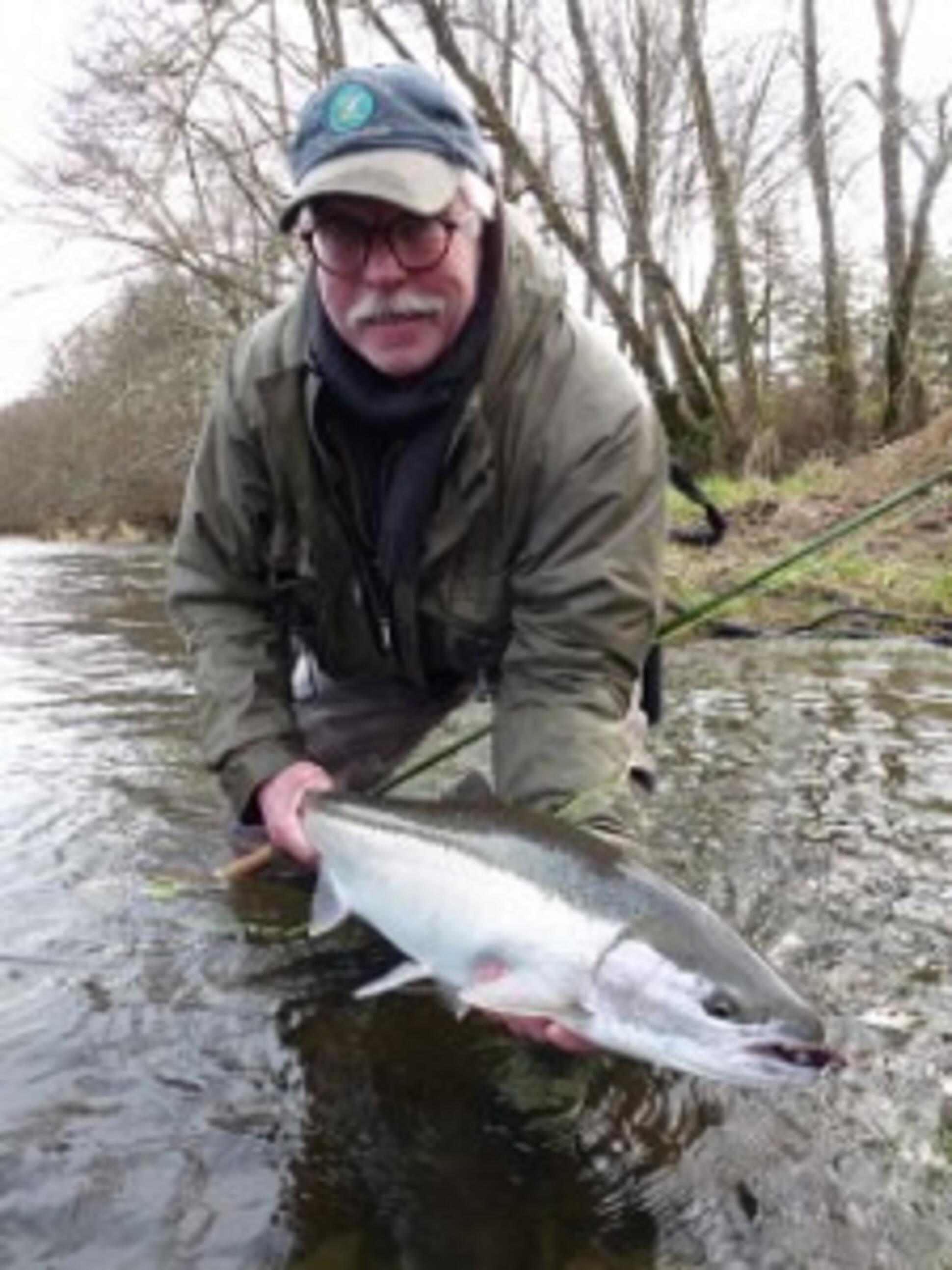 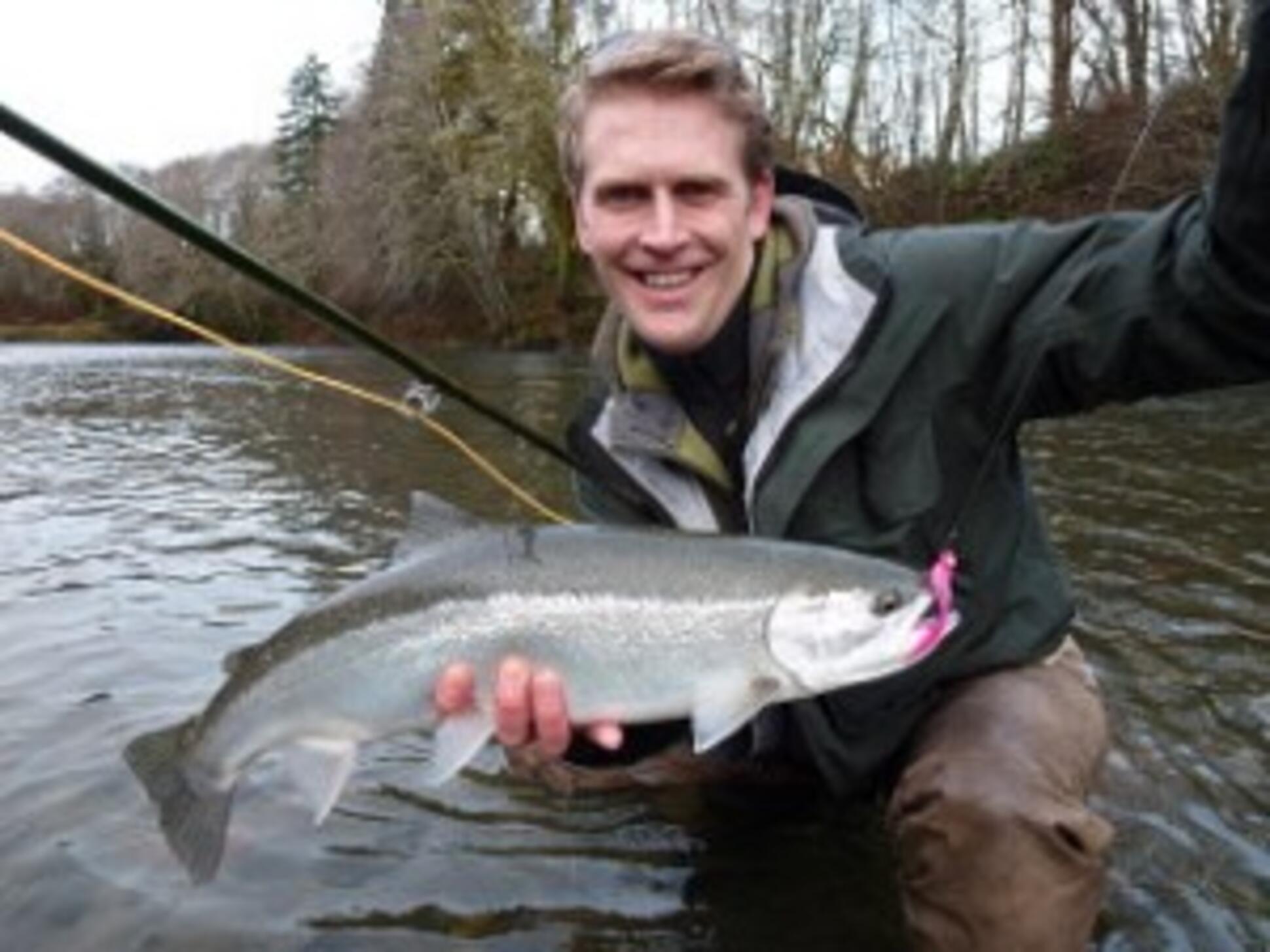