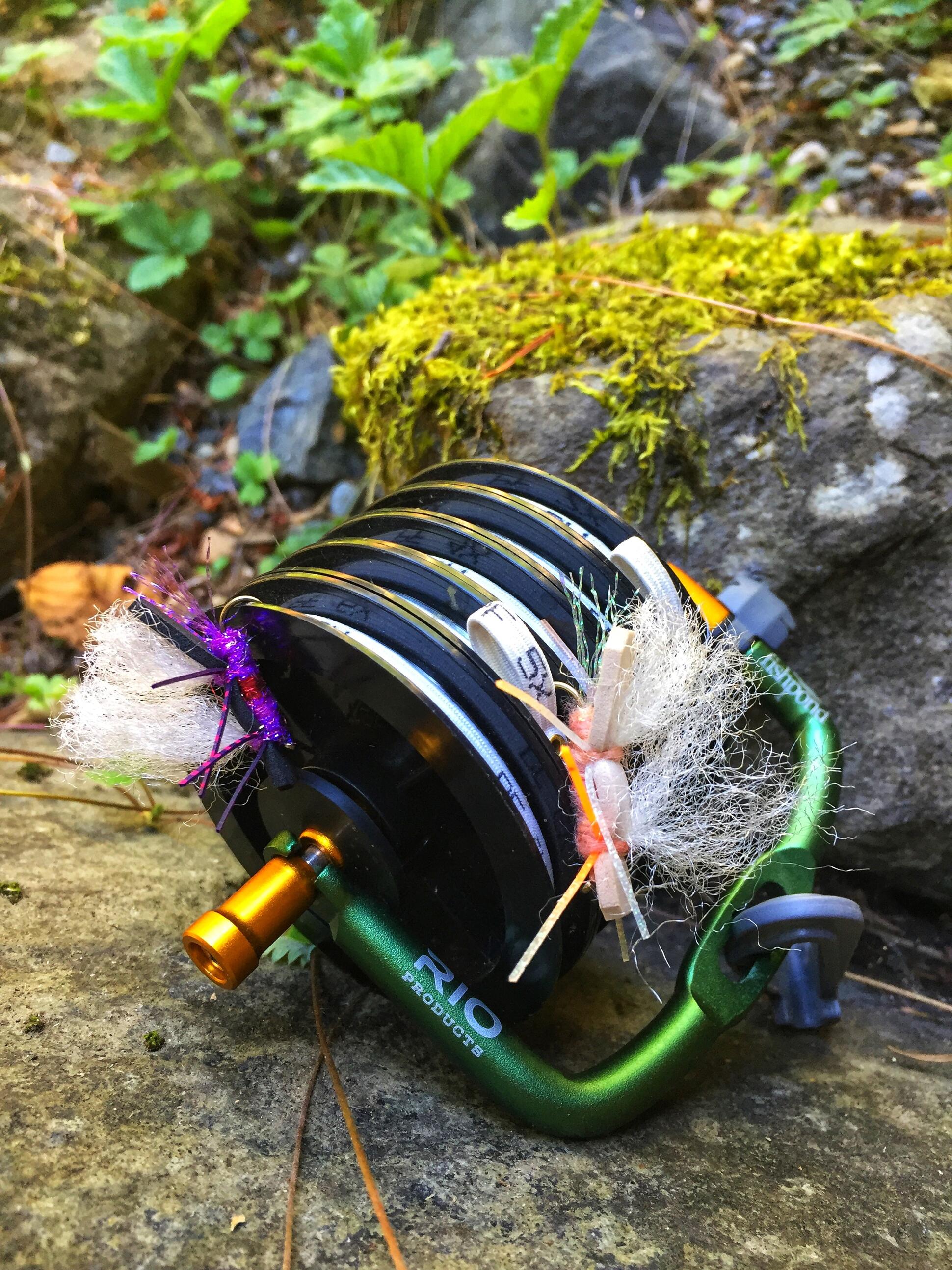 For a fly as popular as the Chubby Chernobyl one would think it has been around forever. But would you believe me if I told you it only started in 2003 with two colors?

From 2002 to 2012, I worked for a small fly manufacturing company in Portland, Oregon. My friend and co-worker Chris Conaty worked as our product developer, material sourcer and liaison with signature fly designers. One day back in 2003, he presented us with a Chernobyl Ant style fly that had a flash tail, dubbing and foam body and dual white wings. He was passing it around the office as we were trying to come up with a name. Since it had dubbing and foam it was much thicker than the Chernobyl Ant. Chris said, “it sure is a fat bastard.” (Likely since seeing the Mike Meyers character from Austin Powers.) And I blurted out, “what about Chubby Chernobyl?” Chris smiled and said, “That’s it.” 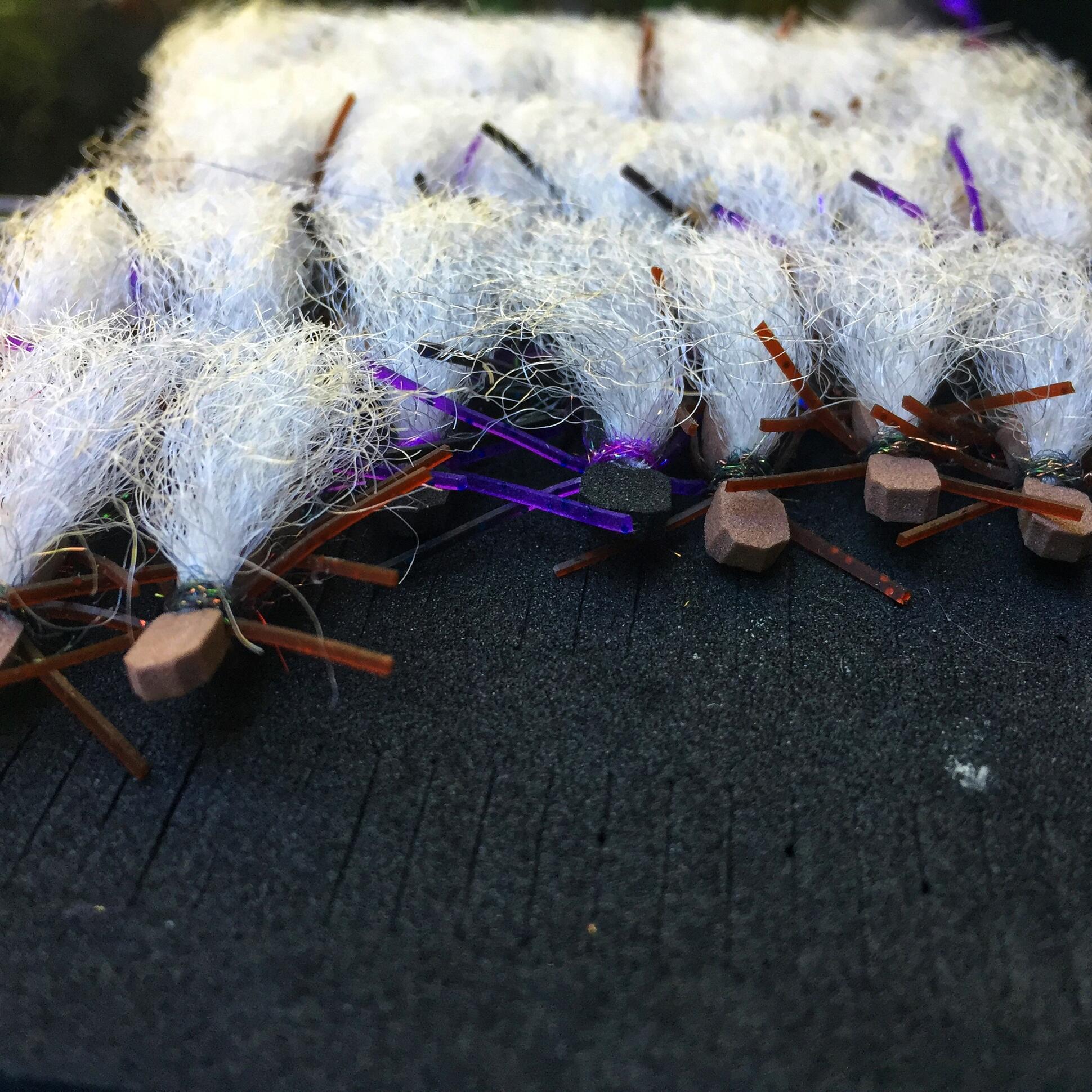 This fly grew a small following on the Snake River and around the greater Bozeman area but had never taken off out in Oregon or Washington where we lived. I started using the gold #10 version on the Deschutes each May and June for the stonefly hatch and watched it out fish all the other popular patterns of the day, like the unstoppable Norm Woods Special. I used to bring several boxes with me to share amongst my friends but to also hand out to other anglers I would encounter.

There was a fly shop out that way that ran many guide trips and sold piles of flies. They wanted their guides to only use the flies they sold. I had a friend who was guiding for them at the time and I would tell him how great this fly was, but he was loyal and did not want to violate his working relationship. I kept sending him some and sharing stories of how good it works. He finally broke down and began fishing them with his clients. It was such a difference he had to share this with the owners, and it wasn’t long before they too were placing large orders for this fly.

The two colors that started it all were Red and Gold. In 2006, Tan and Orange were added to the lineup. In 2007, Royal was added. In 2009, Pink, Purple, Pteronarcys, Olive and Black/Tan. In 2019, RIO added Black, Chartreuse, Blue, Royal Purple and Yellow. 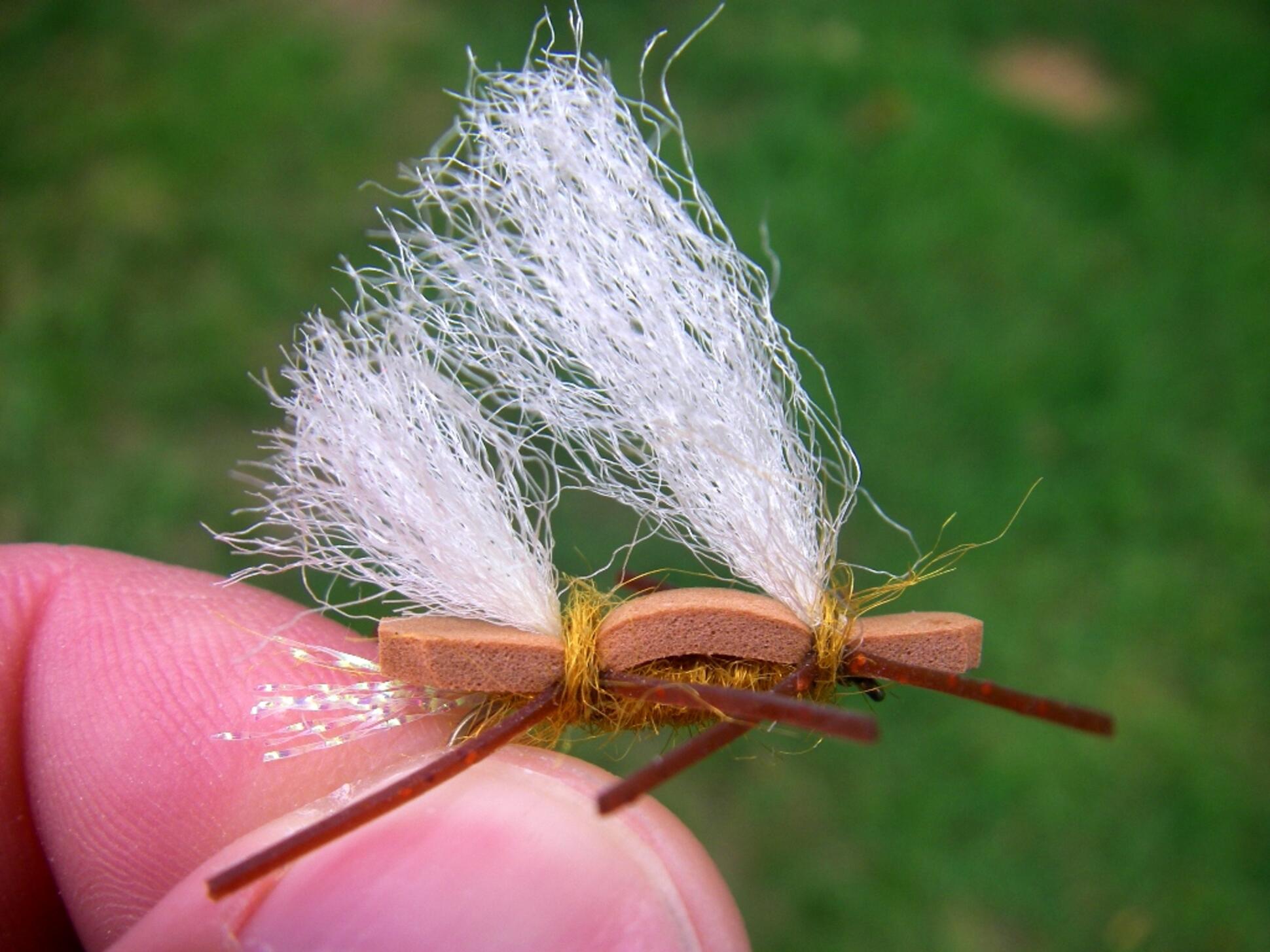 There are plenty of variations that have spun off this pattern as well. One of the more popular ones is the Chubby Norm. A Chubby Chernobyl with Norm Wood Special coloring.

At first glance, this fly looks too big, or too gaudy, or too bright with its large double white wings. But it’s those wings that have propelled this fly into the hall of fame. Ask any fly-fishing guide who is guiding clients with dry flies for trout and they will tell you how many of their clients cannot see the fly. The Chubby Chernobyl changed all that. Clients rave about how easy it is to see the fly. The fly floats well…it holds a dropper…but it also catches fish. It is a guide’s dream dry fly for clients. 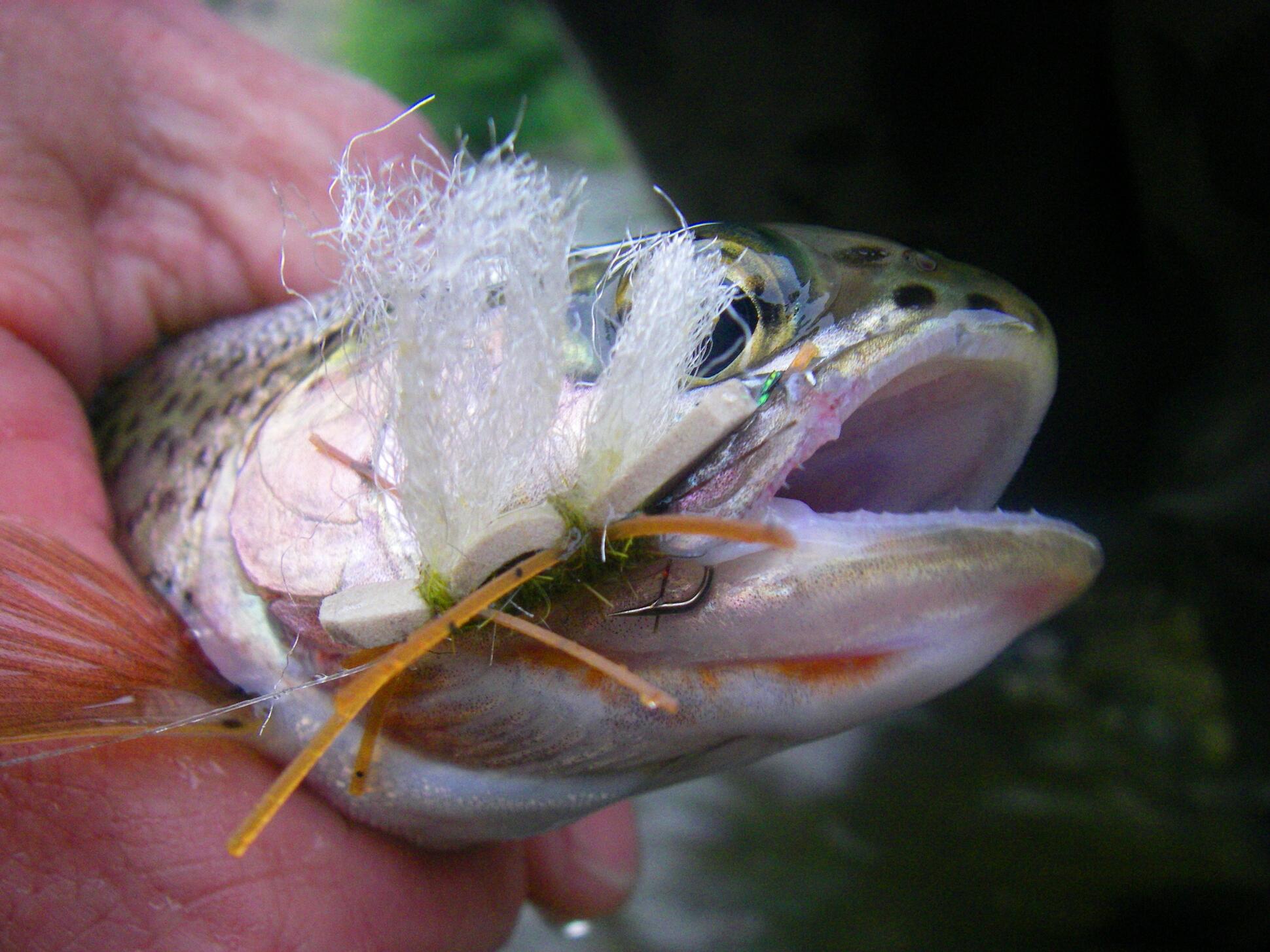 But why do the fish love it? If you are watching a stonefly adult floating on the river and its holding still, it can float a long time and sometimes not get eaten. But one that is fluttering its wings is like a magnet for fish. So again, the secret is those wings. There are plenty of foam and rubber leg flies on the market, so we know those work. But when you take that same fly and add the double white wing, it gives the impression that the wings are fluttering like mad. The square rubber legs serve as oars and move back and forth in a swimming fashion. The flash tail reflects subtle amounts of light giving the indication of movement and life.

Since the wings are so key on this fly, one of my favorite tricks is to carry a small, wire dog brush to fluff up the wings occasionally. Between fly floatant and fish slime, the wings can become slicked back losing their fluttering look. A few strokes with the dog brush and they are ready for action.

The other huge benefit to this pattern is that it can be fished nearly seven months of the year. From the first Skwala hatches of Spring, to the green drakes, Golden Stones and Salmonflies of May and June, onto Hoppers of July to late September. It serves as an attractor otherwise.

The top insect color is Gold (for Golden stones and Hoppers) but Purple, Royal, and Royal Purple are top attractor colors. Black, Black/Tan, and Pink are some other top contenders.

Since Chris was an in house fly designer at the time, he was getting paid to design flies vs getting a royalty from sales of the fly. I have followed in Chris’ footsteps in that regard. I’m now lucky to work for RIO as a product developer and a big portion of my job is to create patterns for RIO. I have so many flies to choose from when I go fishing, but time and time again I reach for the Chubby Chernobyl since I have so much confidence and fun with that fly. 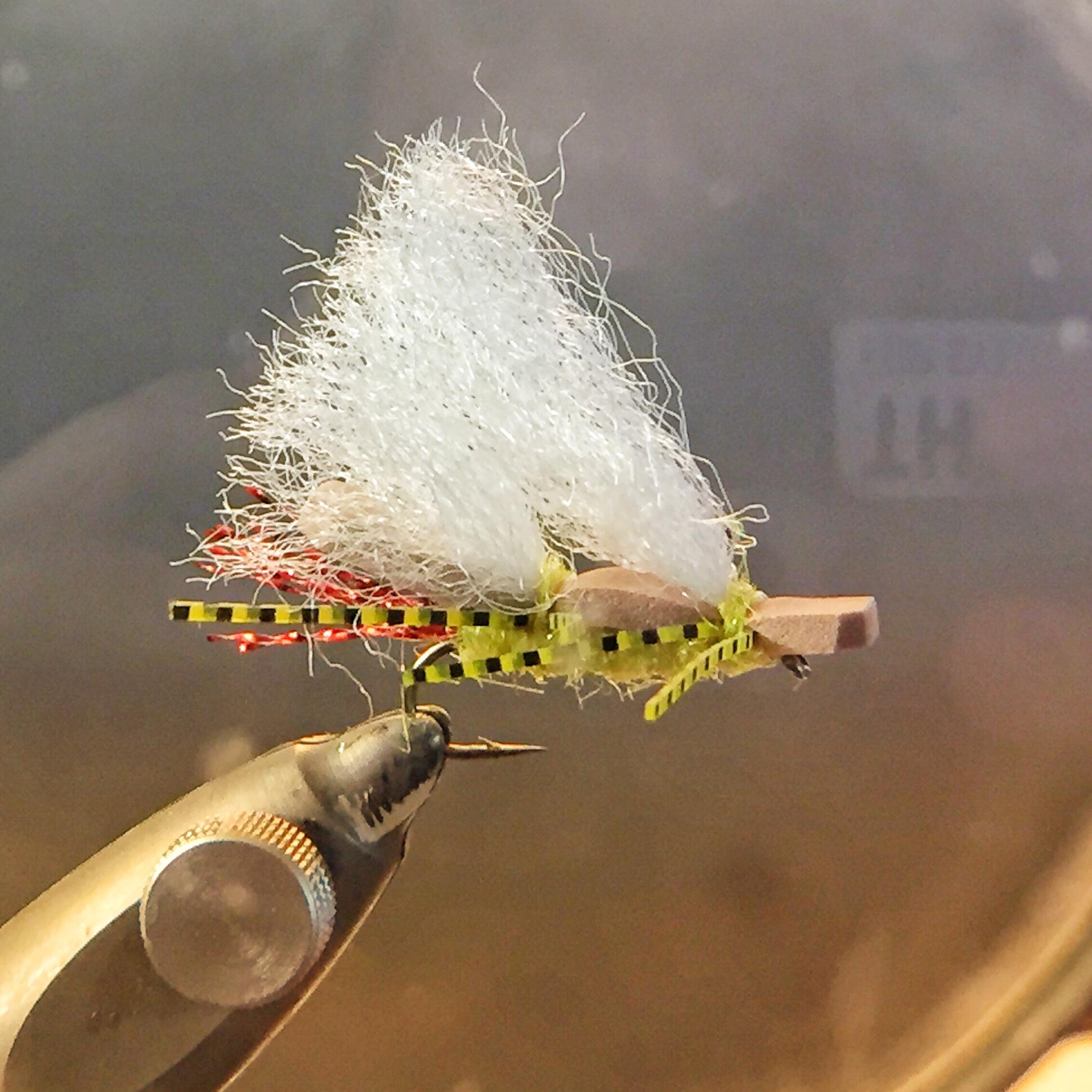