The Chinook or “King” Salmon is one of the most prized freshwater species a fisherman can chase with a rod and reel. From California North to Alaska, Kings are highly sought after when they begin their spawning runs up many rivers. 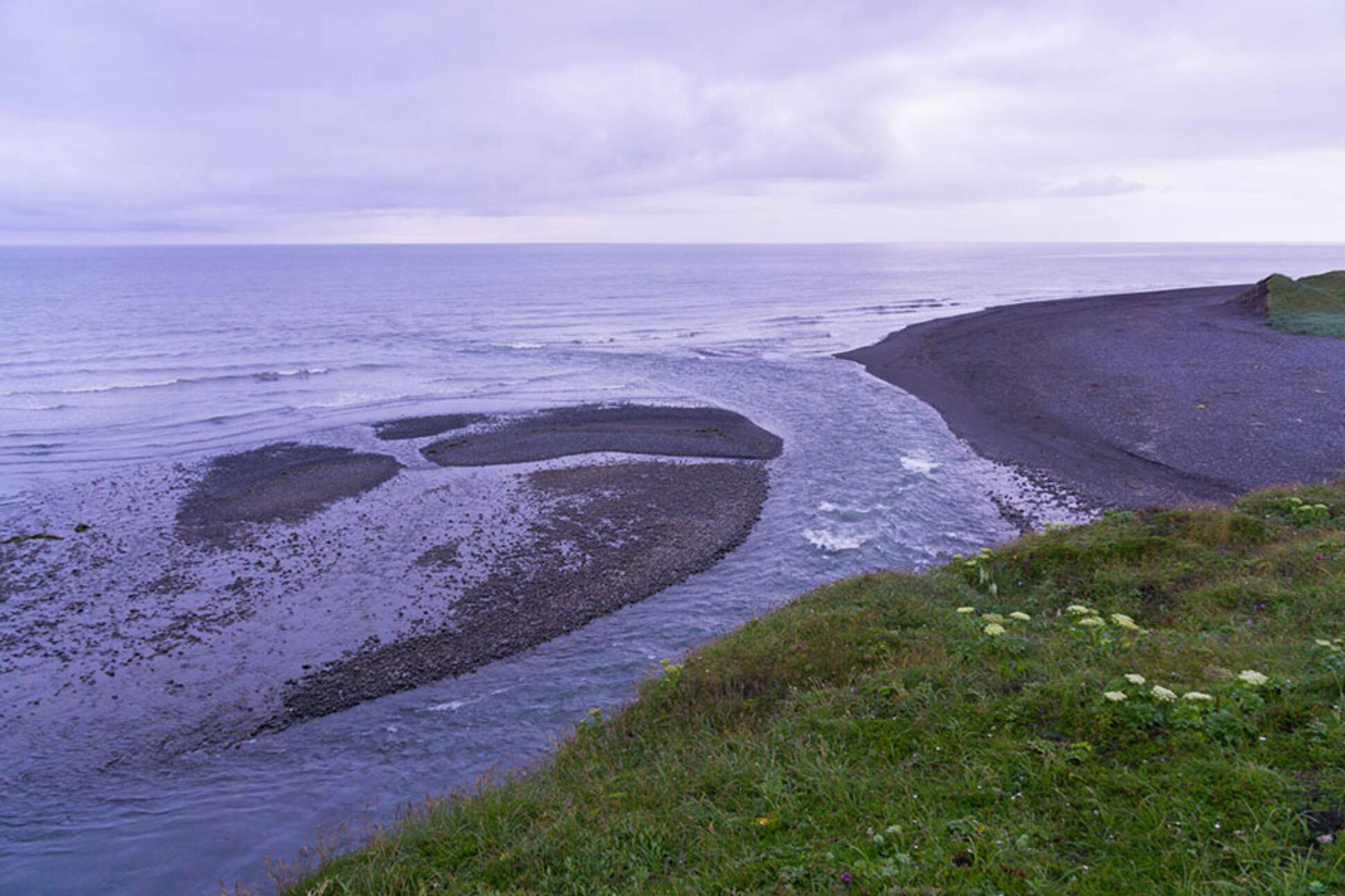 As a kid, I was lucky to grow up on the banks of the Sacramento River chasing all kinds of anadramous species swimming upriver but the prized catch was always King salmon. In the early fall, I could walk down the street and over the levee and usually hook my limit(2) of Chinook salmon on a #5 Blue Fox spinner pretty much everyday. Every once in a while, I would get invited out on my uncle or neighbors boat in search of the big king grab on a sardine-wrapped Kwikfish. In high school I began fly-fishing for kings with success on other local rivers such as the American and Feather. It didn’t seem to matter how I targeted Kings, be it on conventional gear or on the fly, there is just an addiction to chasing these fish.

So six years ago when I was hired to work out on the Alaska Peninsula, I had no clue what the King runs or fishing might be like. The only thing I knew is that these are the furthest West King runs in the state of Alaska and there are very few people around. Flying out to the Peninsula for the first time, I was blown away by the number of creeks and rivers that held these fish as well as the multiple active volcanoes in the area. Upon finishing my first season on the Peninsula, I realized how special this place really was. Rivers and creeks perfectly fit for the swung fly swarming with King Salmon. Anglers hooking Kings everyday on the fly and not just one or two fish, but on great days, anglers could hook double digits. Fly-fishing for King Salmon in a place that has seen little human influence and with strong runs of fish, always increases the odds. One thing that will never leave my mind about that first season of kings on the peninsula was that we never had one fishless day and I had never seen Kings chase a fly down for 30’ to grab it and wake on them near the surface! This was way too cool! 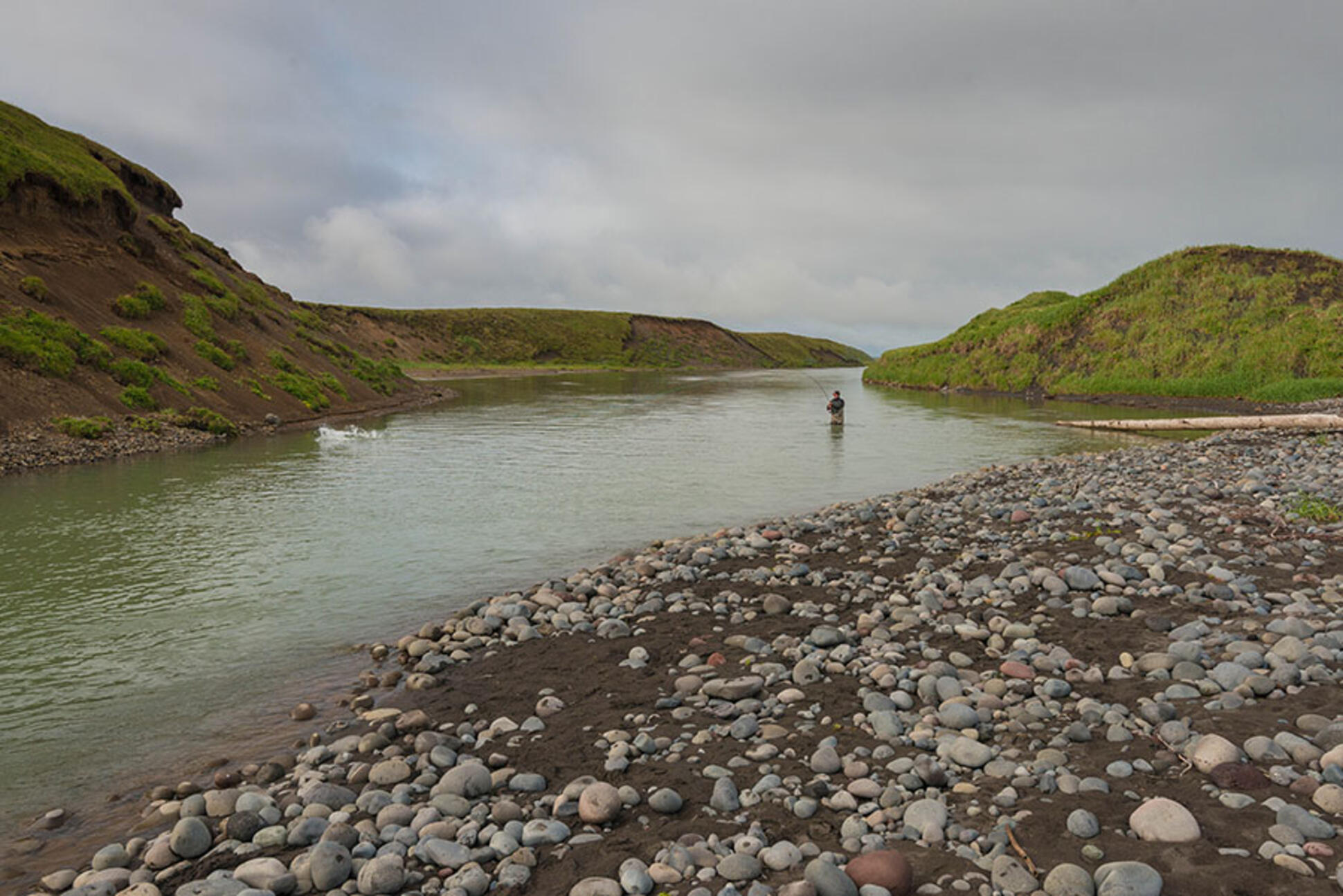 When most anglers think about King Salmon on the fly in Alaska, what comes to mind are big, deep red fish that have been in the rivers for weeks and are typically caught higher in the rivers where most anglers are trout fishing. Fishing big heavy T-17 sink-tips or 24-30’ shooting heads with large flies. There are also many rivers where these fish are caught close to the ocean and are chrome-bright, sea-liced fish. To me, the prized King on a fly is caught closet to the ocean within a few days upon entering freshwater. This is where these beasts show their strength and power. One thing about king fishing on the peninsula is that we are always chasing these fish close to the ocean and right off the tides with lighter sink-tips and unweighted flies! It couldn’t get any better? 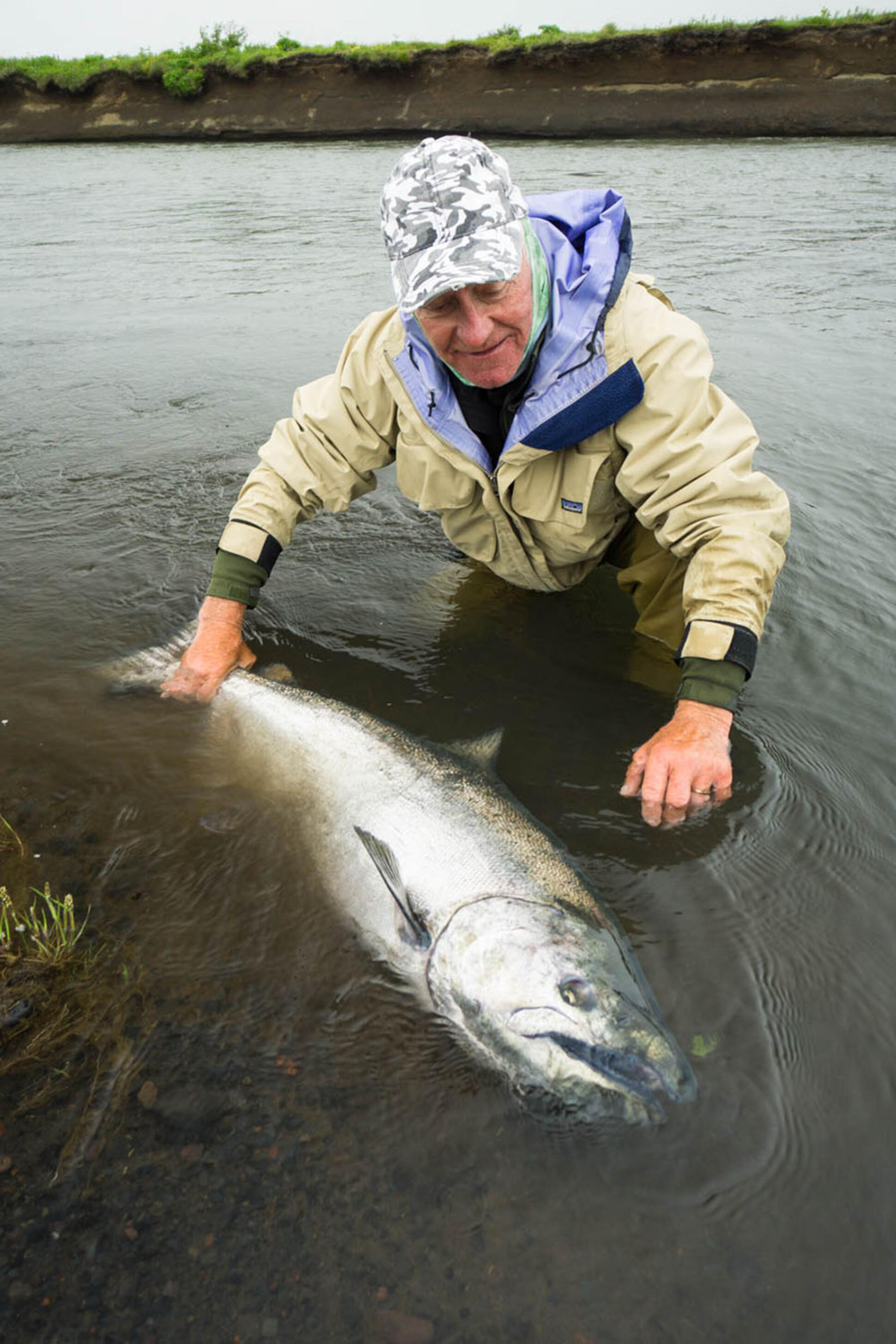 Within a couple of years of working on the Peninsula, the state of Alaska starting to see a collapse in their Chinook runs. Some of the most famous Chinook rivers in the state such as the Kenai, Nushagak, and Kanektok would be closed to fishing for kings due to low returns. We even saw a little effect on some rivers on the Peninsula where commercial Sockeye fisheries have affected king runs and one of our home rivers was shut down for a short time. We were allowed to fish for Kings but only for scientific research. We were allowed to still guide for Kings but only to help the state collect DNA sampling to help determine what was going wrong with one of the states most sought after sportfish. A few of these Peninsula rivers have seen lower returns of Kings over the last 6 years or so but still nothing close to what was happening on the Kenai Peninsula and up into Bristol Bay. Affects of commercial fishing, over-harvest, or just poor ocean conditions? Who knows, but everyone had their speculations!

That being said, what makes the Alaska Peninsula so special is the number of untouched places where the fish and rivers seeing little impact from humans. Harsh weather conditions, difficult travel, and a lack of people allow these rivers and runs of fish to exist. Even when King runs were low in most of Alaska there were still a few places on the Peninsula that thrived and continue to see good numbers of Chinook salmon.

This year was no exception and might possibly have been the best run of King salmon I have seen on two different Peninsula rivers. The season can usually start off slow the first week and begin to taper off in the last week of the season where one might only see a handful of fish hooked. Not this season, it started with a bang and ended with a bang! Fish were stacked not just close to tidewater but from top to bottom. It was hard to find runs in these rivers that were not loaded with fish. Something that made for great fishing and guiding for the few guides, anglers, and camps in the area. And it wasn’t just a numbers thing, we saw some donkeys this season. Where most fish are in the mid teens and very few over thirty pounds. This year we saw numerous big fish, even the biggest ones I have seen on the “Tundra River” going over 40 pounds. Certainly something very special! 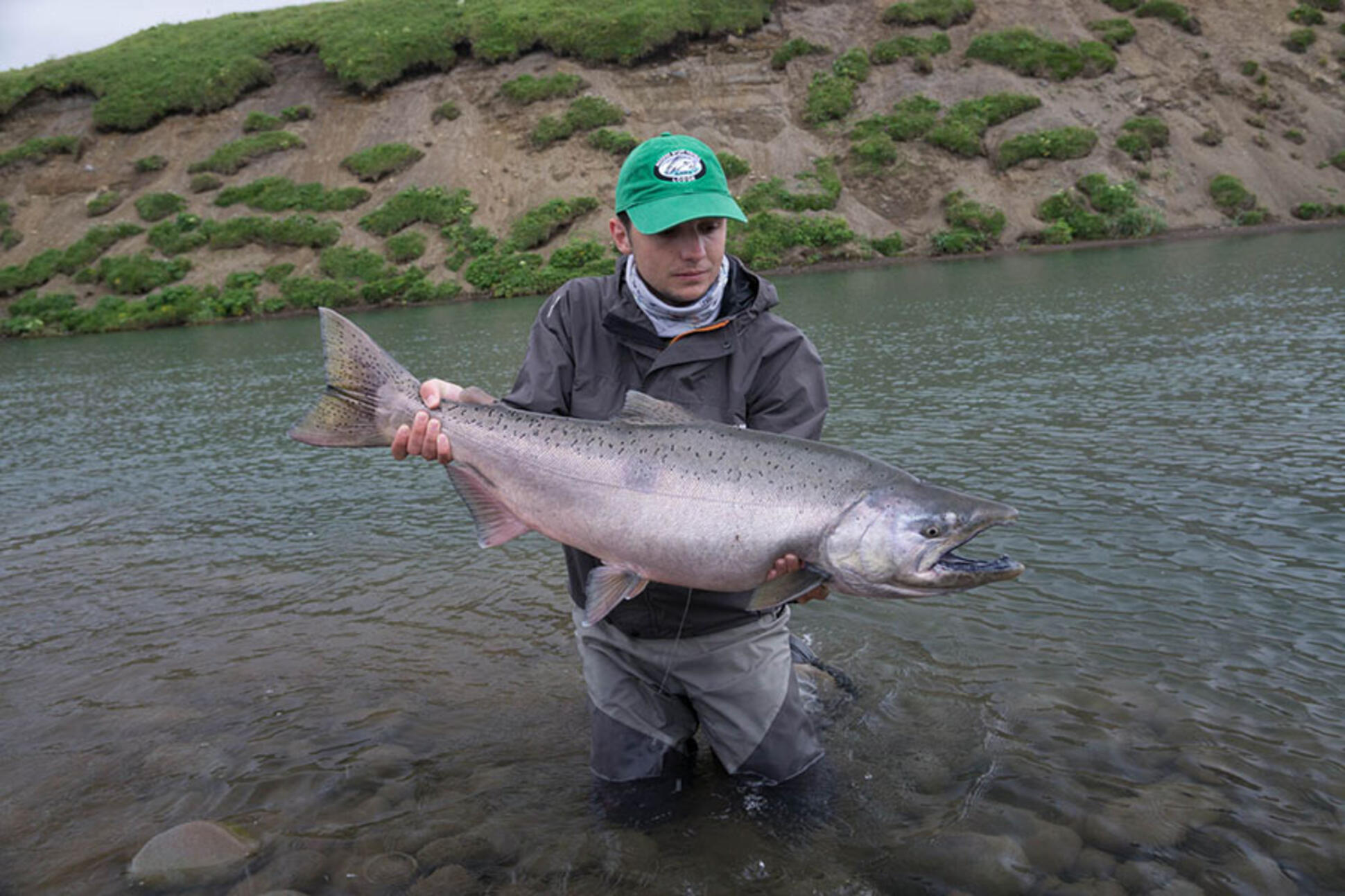 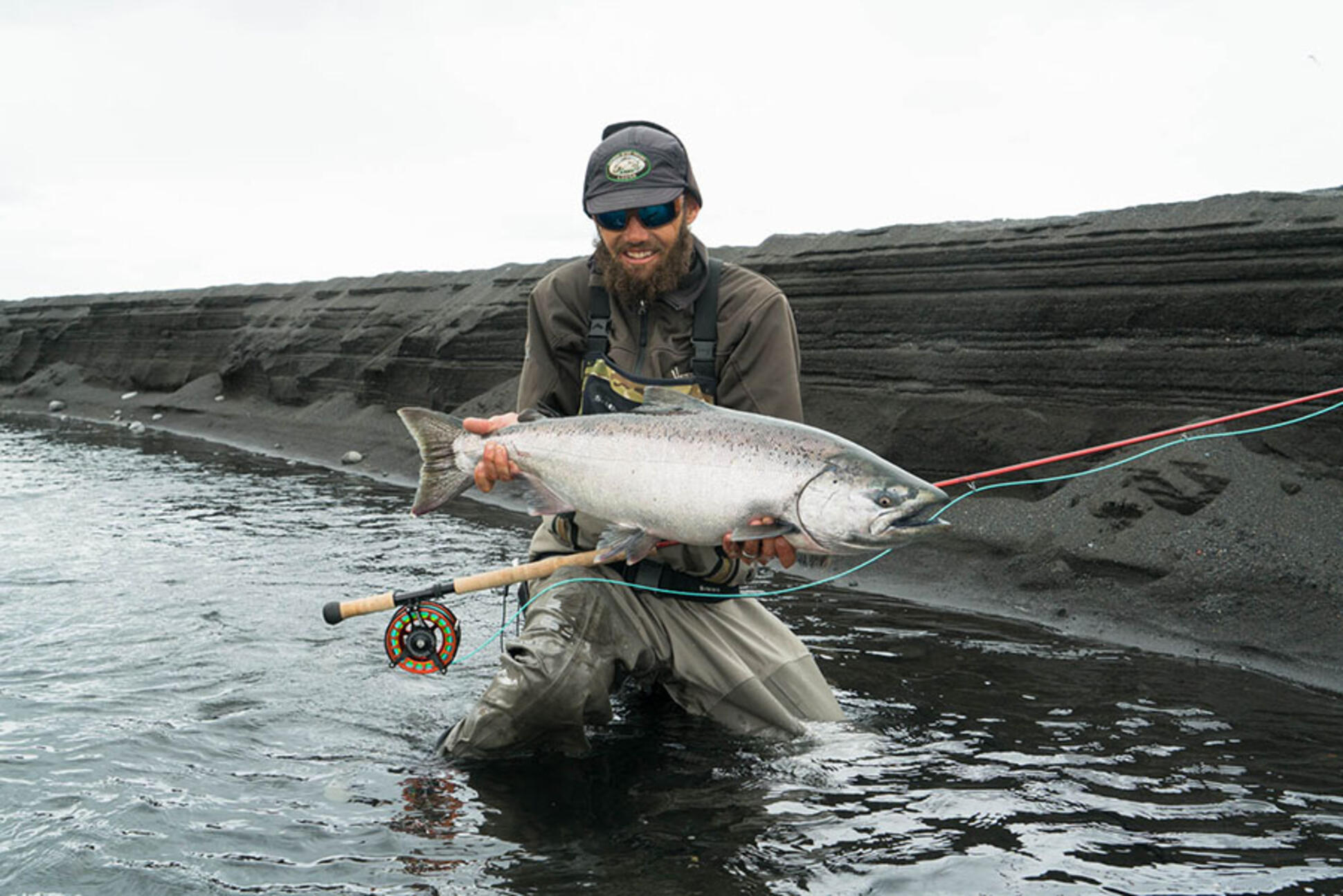 One of the season highlights was guiding a husband/wife couple I had the pleasure of guiding back home on the Northern California coast a few years back. We had great winter steelhead fishing and they asked about the best places to spey fish for kings. I told them about where I worked on the Peninsula and that the Skeena area is another top spot. After a few trips to BC and other places in Alaska with little to no success, they made it out to the Peninsula this year and had one heck of a trip. The first day they each had landed more fish then they hooked in their previous three King trips elsewhere and it continued all week. For those that travel and fly-fish, there are many factors that come into play with weather and fishing. It seems we hit it “wrong” and or have tougher fishing more often than not. But it makes it all worth it, when you have that one trip of a lifetime, and it was really cool getting to experience that with Marc and Gina!

While it is not always “red hot”, the Peninsula is a place you will most likely hook your handful of kings even on a tough trip. There’s a reason I keep heading North to the Alaskan peninsula every June and July and will continue to do so. It’s just one of those magical places that never gets old despite the difficult travel and bad weather. And for those wanting to know the specifics and names of the rivers, well some places do not need more attention and if you do your homework, its not too hard to figure out! 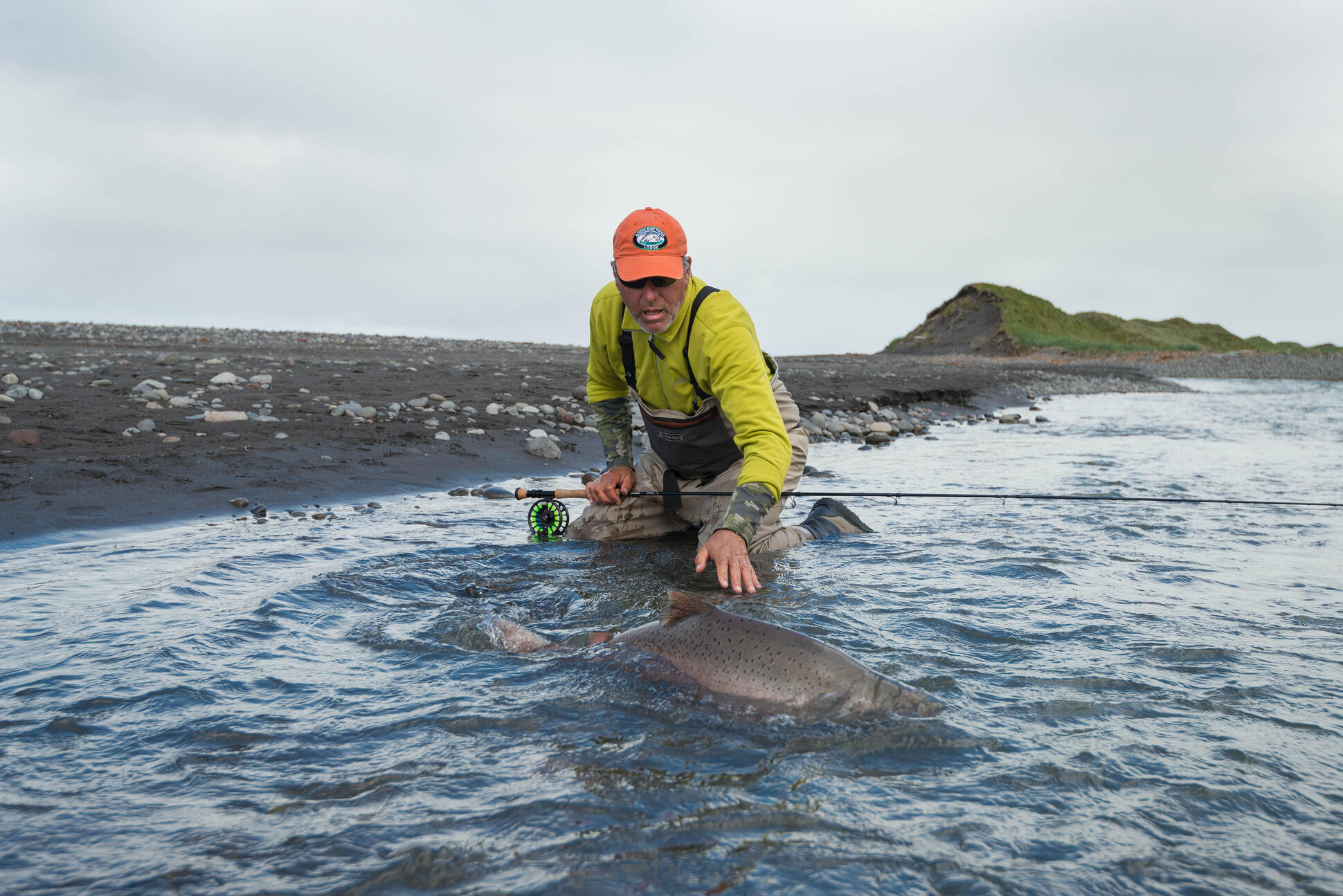