Your clients cancel at the midnight hour, the weather forecast is dismal, the river is rising and turning to mud and you find yourself with a day off, so what do you do? Well if you’re Paul Jacobs and Adam Hope you put your waders on and go fishing. Paul runs Reel Action Fly Fishing and spends a good part of his year guiding and running a great tent camp operation in Alaska. When that season is over he comes home to guide the east coast steelhead fisheries from Ontario to the Lake Erie waters. Adam guides for Paul and between the two of them they spend countless hours in the water doing what guides do best – finding fish for their clients.

Days off are rare for these guys and you would think that having a day off the water would be a real treat, but then Paul and Adam are hard core driven individuals. By luck I was in Erie Pennsylvania for a meeting and called Paul to say hello. He told me about his cancellation and plans to go fishing with Adam and invited me to join them. I had my cameras with me so I said, “Count me in”. Our first stop was a small Pennsylvania Lake Erie tributary that was high and discolored so we moved on only to find more unfishable water at the next two stops. I was beginning to think that Paul’s clients had made the right choice. 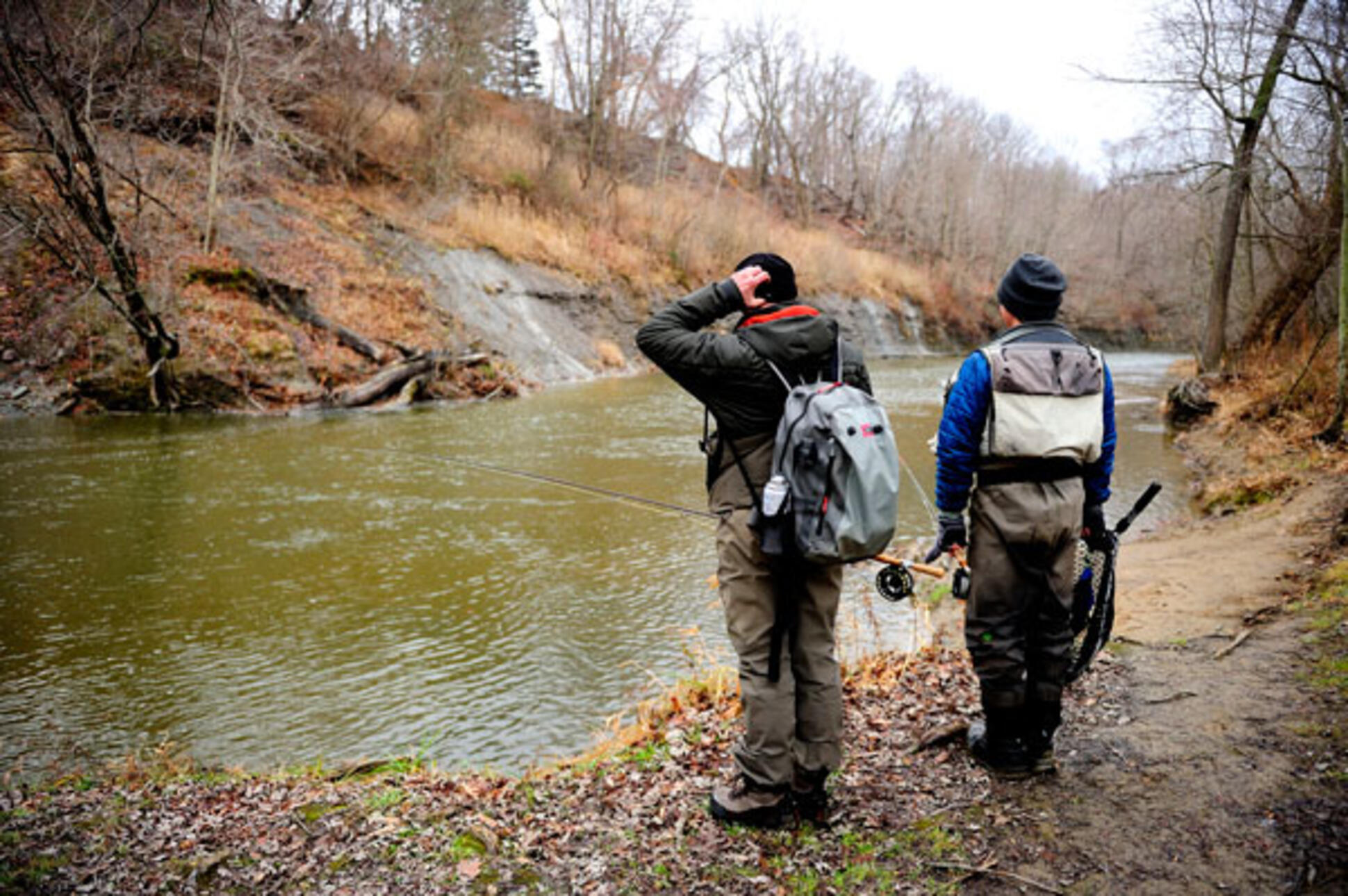 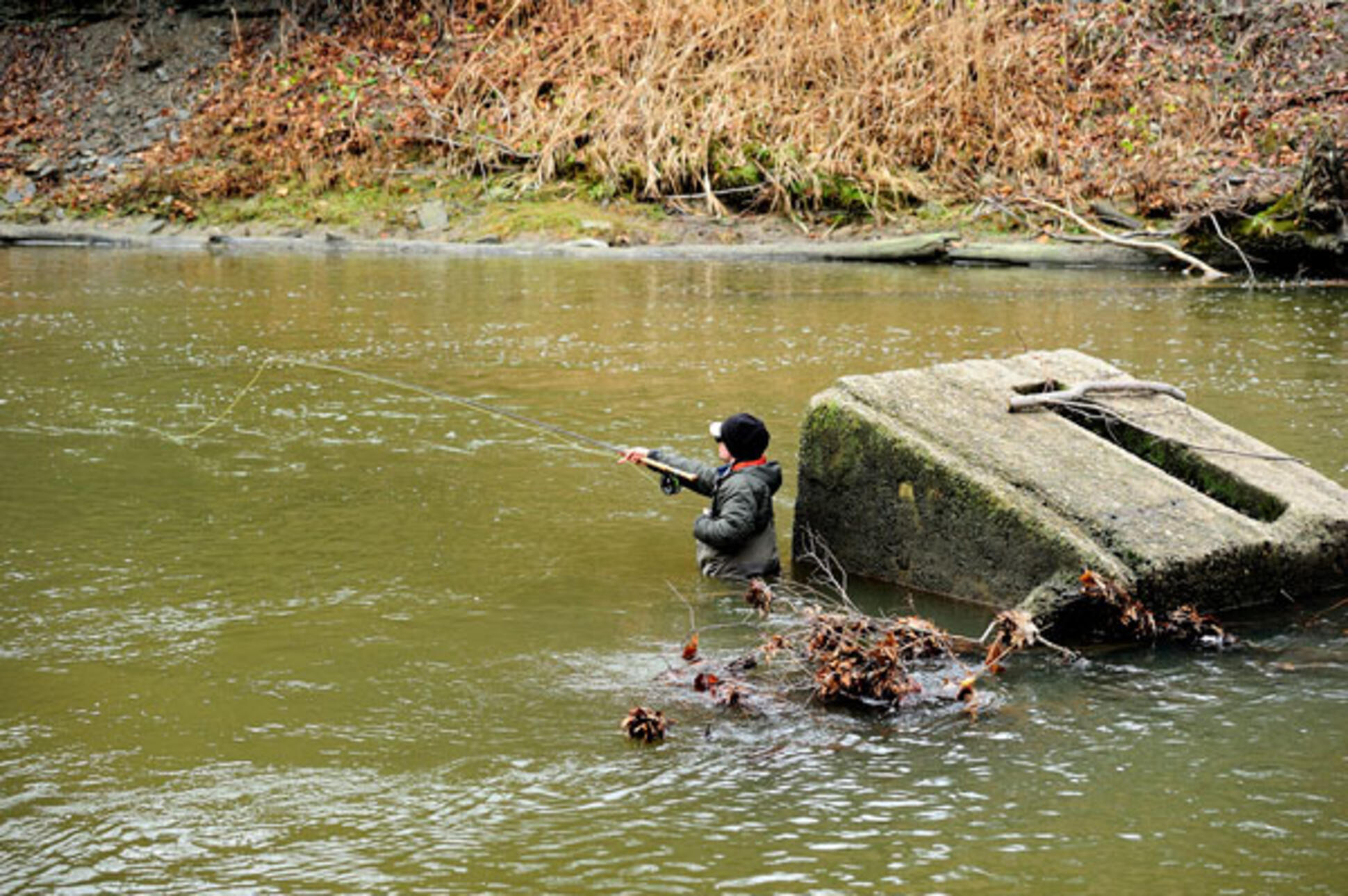 Undaunted Paul announced that we were headed to Ohio and the Conneaut river. An hour later we stood on a bridge looking at water that was actually fish-able. Yes, it was on the rise and, yes, it was slightly discolored but hope springs eternal. We geared up and off we went. The plan was that Paul would fish a floating RIO Indicator line and try an egg pattern while Adam would swing flies with a Redington six weight switch rod and an intermediate RIO Skagit line. 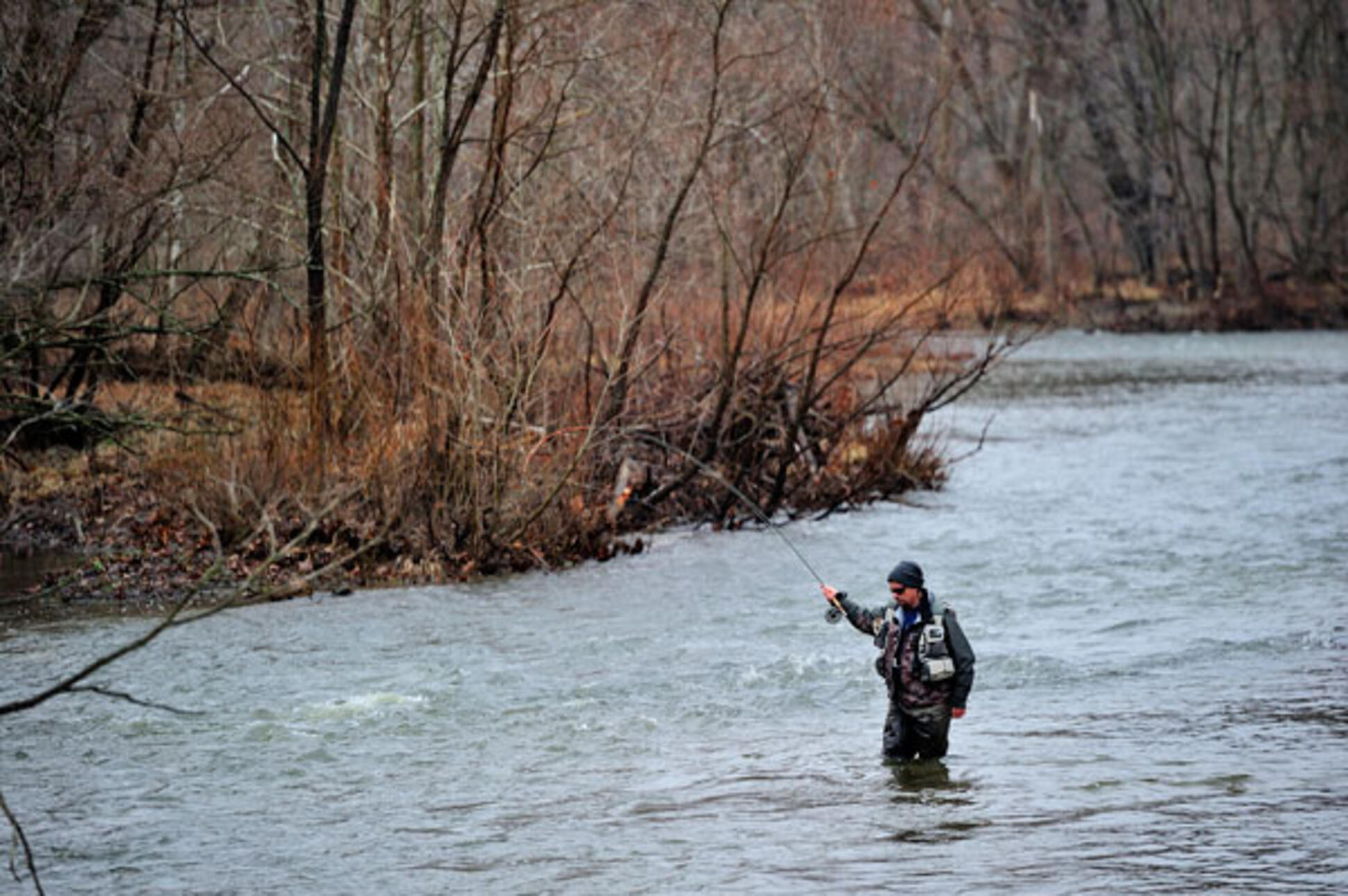 Cast after cast I watched as Paul and Adam carefully covered pool after pool, riffle after riffle, without results. We moved to another section and repeated the drill, the guys changed flies a number of times and still no familiar tugs or bent rods. It was getting late in the day and the light was fading when I suggested we should call it a day. Adam looked at me like I was crazy and remarked, “absolutely unacceptable”. An hour later it started to rain when out of nowhere Adam moved a fish, he recast and the fish came again but no hook-up. I was standing behind Paul when I saw the second strike and finally we had a fish on, the steelhead came to the surface showing himself and the took off down river, not to be seen again. In the end it was the only fish of the day, but as we walked back to the car if you listened to the two guides talk you would never believe that we had a slow day. 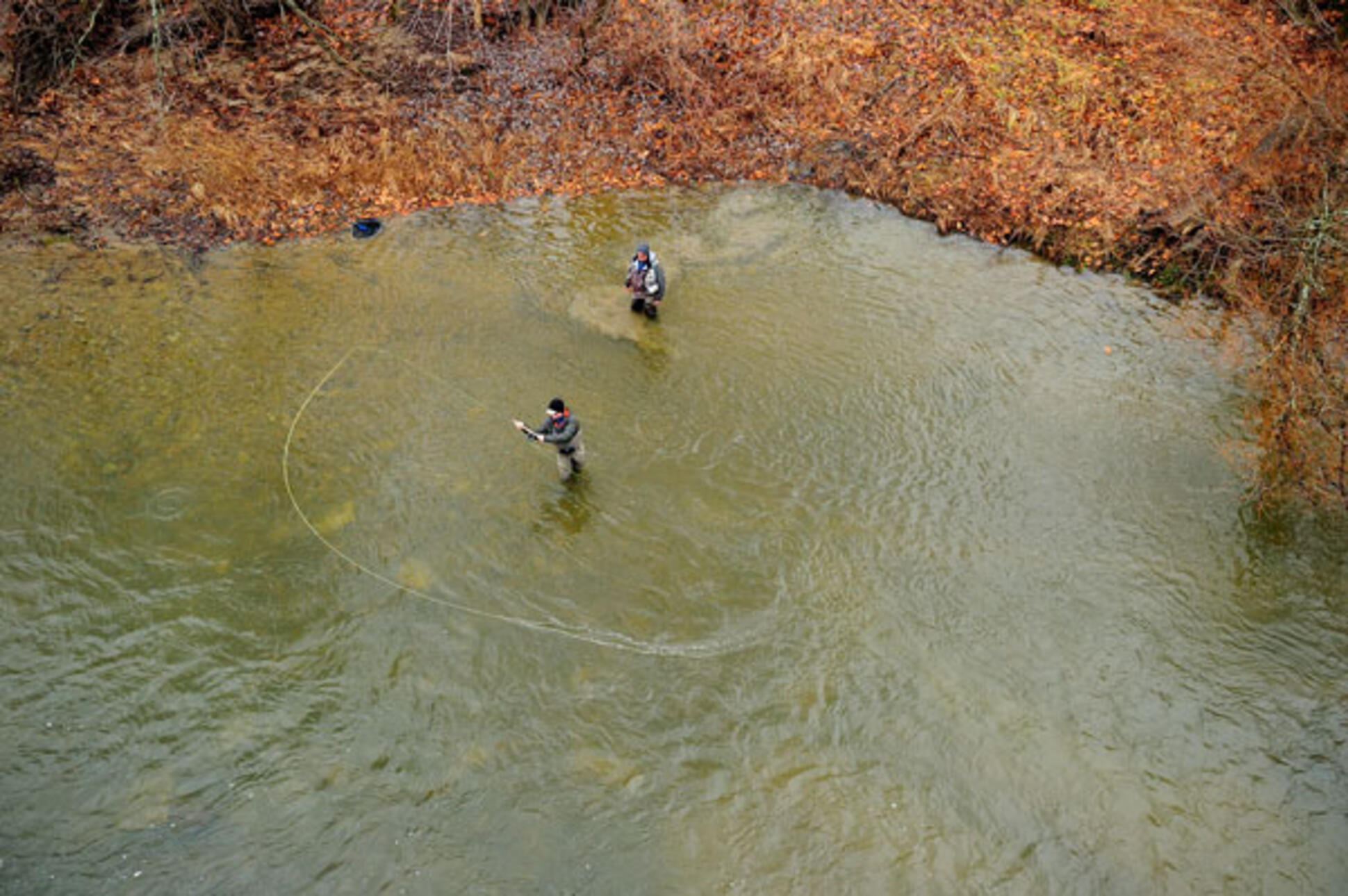 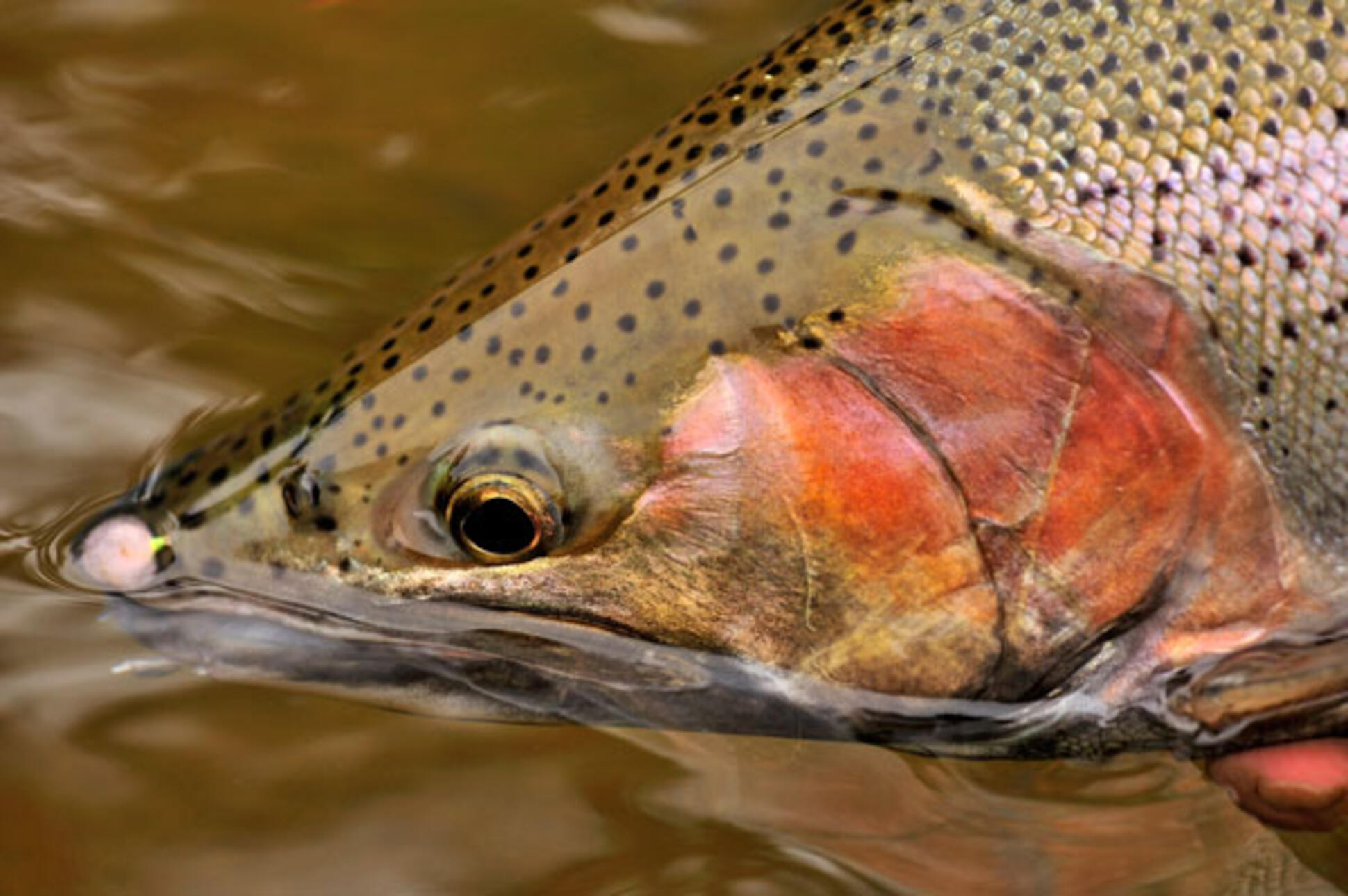 Adam loved the RIO Skagit and the Redington switch rod match, Paul talked about how beautiful the pools were that we had fished and that tomorrow could be the day…. But tomorrow was back to work for all of us. Paul and Adam would be pulling waders on and telling clients steelhead stories. I would be downloading cards and editing the images of a steelhead day with these two amazing guys.