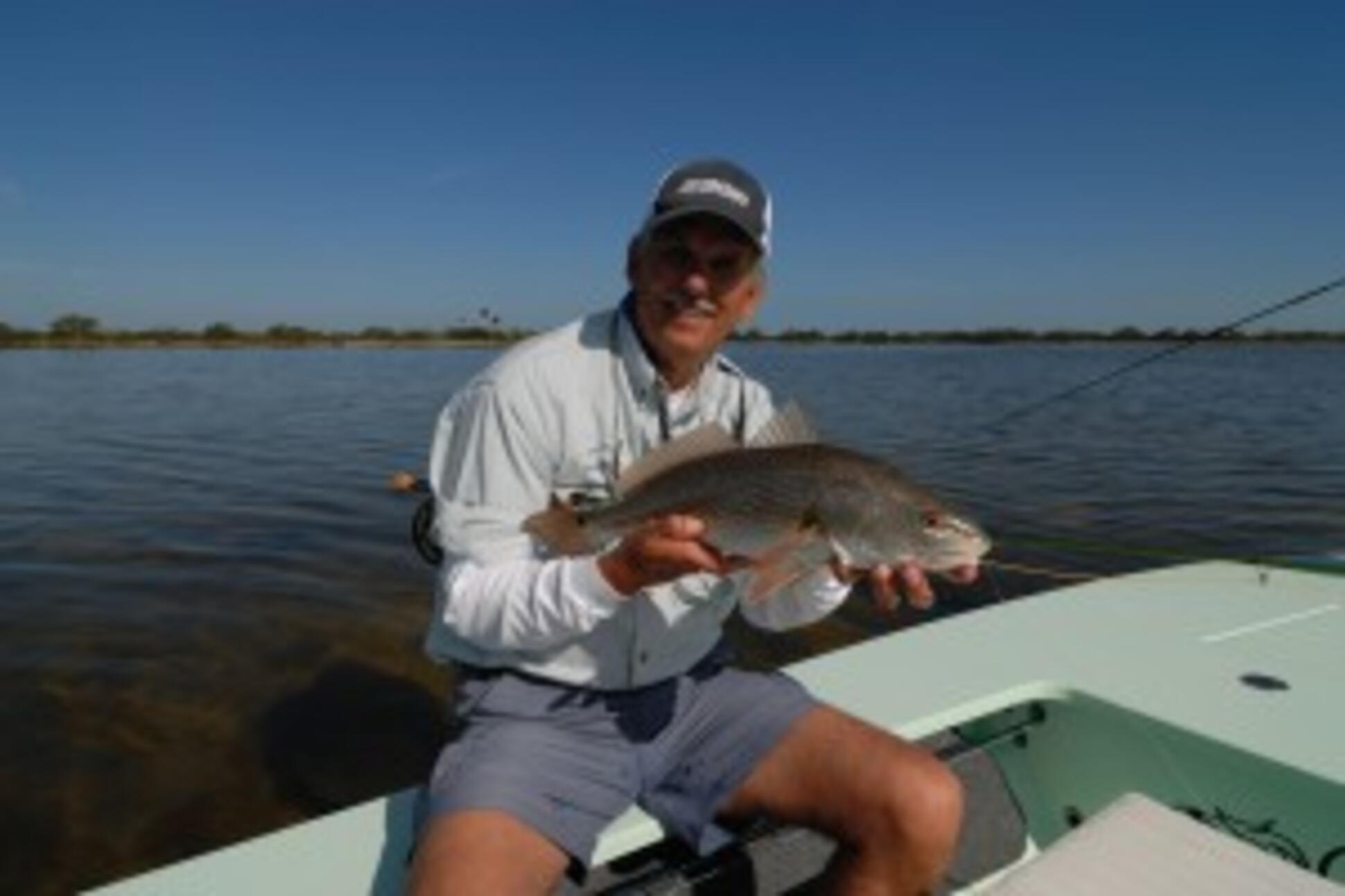 Redfish (red drum) and spotted seatrout are closely related members of the Drum Family (Sciaenidae). Among flyfishers (and probably other anglers as well), redfish are arguably the most popular of all species that inhabit saltwater flats, and spotted seatrout probably aren’t ranked too far behind them. However, another species of Drum that flyfishers too often overlook is the black drum, even though they often reside alongside reds and trout in the same shallow environs. As a matter of fact, it’s not at all uncommon to see all three species swimming adjacent to one another.

Like Rodney Dangerfield – black drum just “don’t get no respect”. That’s really a shame because they are every bit as worthy of the same status as their more popular cousins. As a matter of fact, except for the obvious difference in color, black and red drum share many of the same physical characteristics, feeding habits, fighting qualities, and habitat preferences.

Like redfish, black drum have forward-set eyes and a down-turned (inferior) mouth indicative of fish that feed mostly on or near the bottom. Their diet consists almost entirely of crustaceans (primarily a variety of crabs and shrimps), annelids (worms), and mollusks (shellfish). Nevertheless, black drum also occasionally feed on a variety of fin-fish. Regardless of the quarry, they use pharyngeal teeth, or crushers, at the back of the esophagus to compress the hard carapaces, shells, and bones of their victims. Since black drum are somewhat nearsighted, they also rely on a strong sense of smell to help locate prey. Chin barbels act as feelers and aid in the search for food when they probe the bottom with their rounded snout. As with all Sciaenidae, black drum have a long and prominent lateral line that is indicative of a keen hearing system with which they are able to detect low decibel sounds and water displacement that would go unnoticed by humans. When visibility is low, they increasingly depend on their hearing to assist in finding prey. 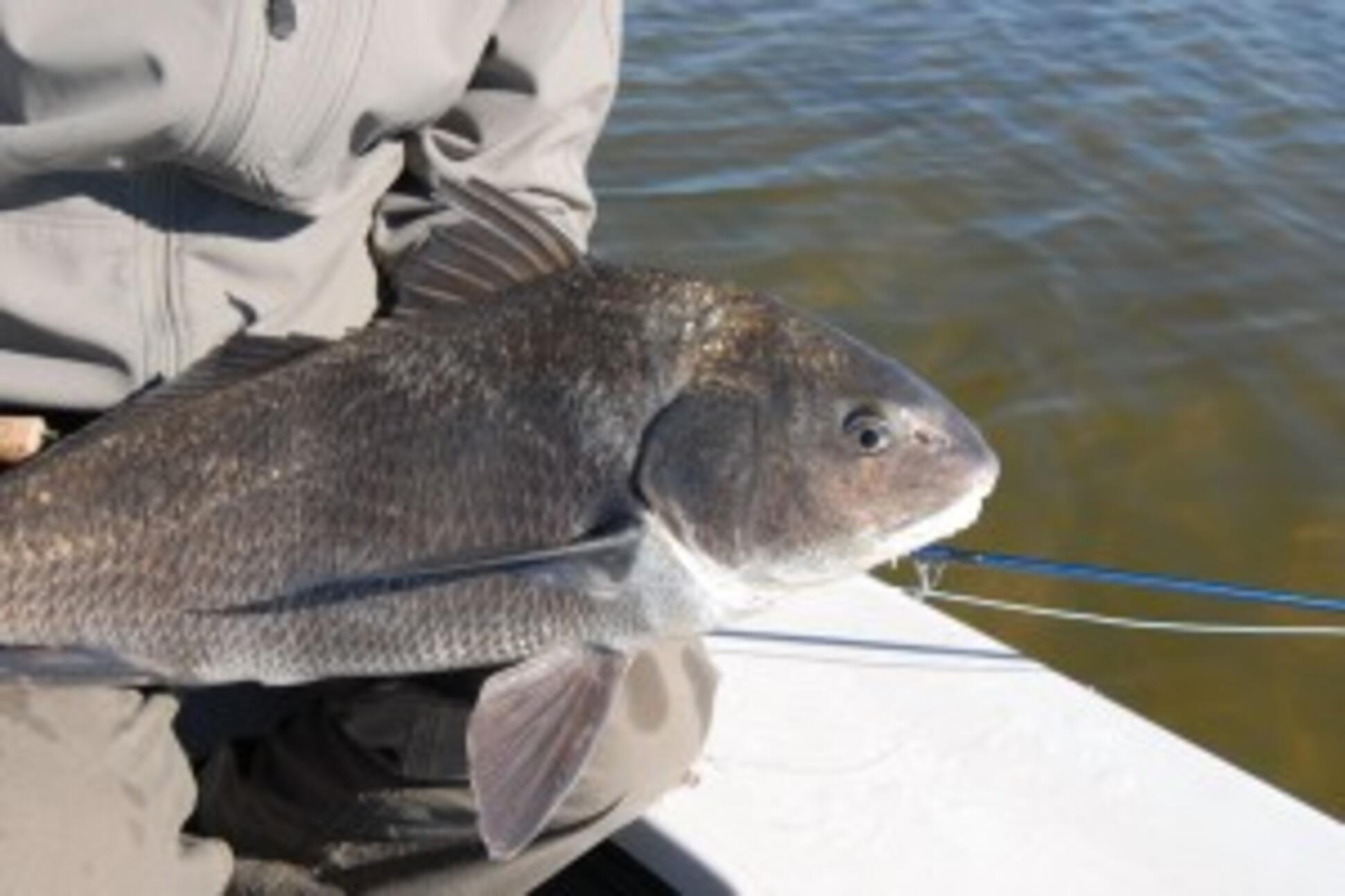 Black drum also have geographic range similar to that of redfish and seatrout. They are primarily found in inshore waters of the Gulf States and a large portion of the Southern and Eastern Atlantic Seaboard, but coastal shallows are the best places to target them with fly gear. Grass flats, mangrove and spartina backcountry, and shellfish (especially oysters) beds are favorite habitats. Whereas black drum are usually found cruising in small schools, one of the most exciting ways to fish for them is when they are tailing in the shallows while foraging on the bottom for food – especially if their focus is on crabs. On the other hand, they can be difficult to catch when feeding selectively on mollusks.

Keeping the fish’s food preferences and feeding characteristics in mind, impressionistic crab patterns should make up the bulk of any fly selection. I strongly favor variations of Dorsey’s kwan, but I have friends who prefer to use a black or dark-brown Clouser minnow. Regardless of the pattern, it is best fished rather slowly along the bottom and, on occasion, even left motionless in front of the fish in the same manner as when permit fishing.

While records indicate that black drum can grow to almost 150 pounds, those weighing 20 pounds or less are the norm on shallow flats; but, 30-pounders aren’t uncommon. They are very powerful adversaries, but aren’t known for making particularly long runs. As a result, any well-built reel capable of holding 150 yards or more of backing is adequate for an average fish on shallow flats. I like a 9-weight rod matched to either a RIO Redfish Line or the outstanding new RIO Permit Line for casting typically large and weighted flies. Leaders between 9 and 10 feet long that are tapered to tippets that range from .013 to .017 assure adequate turnover. RIO Redfish/Seatrout Leaders made from medium-stiff mono with a heavy butt section are ideal. I recommend adding a short section of 30# mono shock to protect the tippet – especially around shell beds. Sturdy, high-top wading boots are another essential piece of gear when wade-fishing in prime habitat with oyster and other mollusks that can cause severe cuts to feet and ankles that are inadequately protected.

Black drum can be difficult to fool with a fly, and that may be a primary reason they aren’t quite as popular as reds and trout. But some flyfishers like taking-on the challenge of highly selective fish. It further adds to the satisfaction and excitement of catching them.